My grandfather was ninety three. My mother was sixty three. I was thirty three. My daughter had just turned three. Our ages were all lined up like the beauty marks on Snow White in the Donald Barthelme version of the story. It was the year the Bears were about to win the Super Bowl, the year my lung collapsed, the year mother had lived one year longer than had my dad. I flew eight-hundred miles from Chicago to Philly to cheer up my grandfather. He was in a hospital with pneumonia. When he saw me, he brightened and revived. As a result of a mining accident in Odessa, my grandfather had only half a thumb on his right hand. My mom was also happy I had come in. As a young girl, she joined the touring company of the Philadelphia Academy Players but left the acting life after six months to marry my dad. My father, a shipbuilder, died from asbestos poisoning at the age of sixty two. I stayed until my grandfather was out of danger. Then I flew back. My wife needed help with the kids. My daughter weighed less than one pound when she was born. We never made it to the hospital. She was born in the backseat of our car. When I got home, I bent down to kiss my five-year-old son and my lung collapsed. They inserted a chest tube and put me in the hospital. While I was lying there watching the playoffs, my grandfather died. Two days later, my mother called. She had decided to fly to Chicago as soon after the funeral as she could so she could nurse me back to health. She stayed two weeks. When she came, she gave me a black robe, glued herself to the TV, and got into my wife’s beautiful hair. It was Super Bowl Sunday. My wife had made banana bread and spicy chicken wings. My mother was sprawled out on the couch like Snow White after a colonoscopy.

The Bears blew out the Patriots 46-10. Most Super Bowl sacks ever. 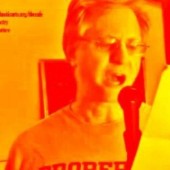 Bill Yarrow is the author of Blasphemer (Lit Fest Press 2015), Pointed Sentences (BlazeVOX 2012) and four chapbooks. His poems have appeared in many print and online magazines including Poetry International, RHINO, Contrary,DIAGRAM, Confrontation, Altered Scale, Gargoyle, and PANK. He is a Professor of English at Joliet Junior College where he teaches creative writing, Shakespeare, and film.