A Carton of Kent and a Bottle of Johnnie Walker Red Thirty years later she told me she had had 3 illegal abortions. I also had a sister for a year, but I was two, and when I searched my memories from those times, all I could remember was a scene during which I held tightly to my grandmother’s hand as she took me down some concrete stairs into the newsroom of a sports daily. In the giant room filled with sputtering typewriters, I saw a man spin a hula hoop around his midriff while he smoked. When we approached him, I noticed two large sweat marks under his arms. He smelled like spoiled buttermilk. He picked me up by my neck and told my grandmother that I was growing like a beanstalk. And then he called me Sandy.

This sister I had developed spinal meningitis and died a few months after she was born. She was buried somewhere on the outskirts of the city, next to a gypsy camp that made its living by selling hot corn on the cob from buckets, and pickpocketing unsuspecting functionaries. I felt nothing for her, however. Despite being blood, she was merely a story or a part of a confession being given in another country, over several cups of fancy coffee at an establishment with an outdoor patio next to a cobblestoned street. In my mind, she materialized as a flock of pigeons shitting on a bronze statue of a famous poet in the middle of a park in which I used to play. In front of that same statue of that famous poet, a German couple once approached me when I was a child and snapped a Polaroid picture of my face. They made strange signs with their hands and grunted instructions that required me to shake the photo and wait a bit until the image came into focus. The pigeons settled on the poet’s head, shat down his face, and took off. And that was my sister’s brief life. Minutes later, I lost the Polaroid during a footrace from a policeman who was looking to hit me with his blackjack, because I had crossed over a forbidden grassy area.

“There were complications with two of the abortions, but I was lucky that I could be attended to by a very good doctor. And he only took a carton of Kent and a bottle of Johnnie Walker Red.” 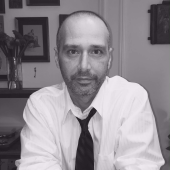 Alex has published fiction in Pank Magazine, Camroc Press Review, Specter Literary Magazine, Connotation Press, and others. He is the author of the novella Short Lean Cuts, (Amazon Publishing) available as an e-book at Amazon and Barnes & Noble, and in paperback at Amazon. He is currently on staff at NC State University.