“A Certain Kind of Girl”: A Conversation with Nina Boutsikaris “I know this: always to be understood would be unbearable. Claustrophobic,” the narrator declares in Nina Boutsikaris’ stunning, intimate debut I’m Trying To Tell You I’m Sorry. It’s an alarming line, an uncharacteristic admission in a work of creative nonfiction. As a writer, it also feels like a personal slight. Don’t we go through the emotionally draining, intellectually diffusive process to be understood? “I think this narrator simultaneously wants to be fully exposed, but also does not ever want to be exposed. She is always kind of creating this performance, where she wants to be seen or, I guess, loved or understood, but she is also unable to let go of protecting herself, gaining a sense of control with her performance. Ultimately, how can we ever really know somebody? Even if we’re the person telling the most brutal thing we could expose about ourselves, is that really knowing? Is it true?” Nina asks me instead.

Such questions are littered through the short length of I’m Trying To Tell You I’m Sorry, which gives us a narrative voice in a perpetual mode of questioning. “I try to keep the narrator as not always knowing. So it doesn’t feel like she’s coming at it all figured out,” Nina says, matter of factly, distancing herself from the voice of her book. But this a book of nonfiction! Where every work is autobiographical to some degree, a book of personal essays clings itself to confessional writing. But Nina is careful not to equate herself with the woman she is on page. “I don’t think of her as myself anymore. I just put her down on the pages, and started to think of her as a character. I just separated myself from her, and that way I was able to study her better.”

In the collection, the author reveals this narrator to us through three essays: with assertion in “Be My Nepenthe,” in sickness with “This One Long Winter,” and empathetic in “Sons & Other Strangers.” The book calls itself an intimacy triptych, and much like a triptych, the three essays in the book are in constant dialogue with one another. Written in a dramatically non-traditional format, with an affinity for fragments and negative space, the narrator shifts through uncomfortable truths and lucid scenes, grasping at the unknown, looking for answers.

When she asks “If she is a certain kind of girl, won’t she always be a certain kind of girl?” she seems to be asking what kind of girl do we, the readers, judge her to be, instantly questioning our lens. When she asks, “Is this all I’m ever thinking?” she’s prodding at her own obsessive brain, willing it to think something less complicated. And when she asks, “Who can resist the gooey indulgence of feeling understood?” she seems to be teasing her own motivations. Most of these questions want to exist on two planes at one time, where it is possible to both be and not be received as a certain kind of girl, to obsessively think and not think of one thing alone, to be both relatable, and left alone. Nina, the author, is in on this dilemma. “The book is called I’m Trying To Tell You I’m Sorry, and so much of the book goes, ‘what I mean is this’ or ‘I’m trying to say this’ or ‘actually, this is.’ There is a lot of stopping and starting, lot of interrupting. The book is one big collage narrative. For me, it’s about piecing things together. For me, she’s trying and trying, and she can’t always say what she wants when she wants to, but maybe does so later, in a later section.” But Nina is not always so forgiving of her narrator. She understands how much of her lived experience gets to become a story. “I just never wanted to cut her any slack for what she’s doing. At the end of the day, it’s very complicated, this entire web of men and sex and power. And she’s playing a part in something willingly. I felt like I had to address that in some way. The narrator is pretty obsessed with thinking about her life, and trying to make sense of things. There is this W. H. Auden quote that I keep coming back to, ‘Great art is clear thinking about mixed feelings.’ I felt like she could comment on her obsession with having a story, and how we hold on to our stories.”

But the book is not merely a template on the internal journey. The narrator is forever in observation of her own body, and the way the bodies of others respond to her desire, friendship, and repulsion. One can almost imagine her eyes dart across space, cued in to every clue. This allows Nina to use some of the most delicious sensory detailing I’ve read in a long time, juxtaposed in contradictions. In what other writing does “crispy calamari” and an “exposed thigh” meet? Where else does the “throat” become a vessel for memory? And what do we learn from a story where the abject is all three: state, body, and person?

“She really watches everybody else, she watches herself, she’s very matter of factly recording things. I used to do that so much with other people, I used to obsessively write down what I observed in strangers, always record how people interacted with each other, behaved in public, how people moved with their bodies, what people did with their faces, and the things they say to each other, and what they meant. And when I turned that gaze on to myself, it became a lot about what I had physically done, and what I physically experienced. And that, of course, comes from memory that the body holds. And the best way to deal with that memory is to write about it as honestly as possible,” Nina explains.

This can be attributed to the fact that Nina grew up as a child of two actor parents. Performance or an awareness of performance is evident on the page, and that lends the narrative voice a self-awareness that is often missing in nonfiction works. Nina calls it “performative honesty.” But with that honesty of self and living, is also a love of the invisible, the feelings that hang and cling to air and body, but do not always manifest in expression.

“Everybody remembers everything differently. And your style as a writer affects the way memories translate to the page. I’m always more interested in making meaning out of memory.”

The project, Nina tells me, began in a graduate class where she was asked to write a scene as if it were a dream. That exercise lent a lucid, almost ethereal quality to the book, elevating the real and tangible to an ephemeral feeling. But that doesn’t in any way digress from its nonfictional, truth-telling impulse. If anything, Nina manages to make the writing simultaneously about what happens in a scene and what happens in the head, which don’t always have to be consistent. “Not all nonfiction writers write about their lives,” Nina says. “Nonfiction writers want to hold you to truth more. But of course with memory, you’re in a pickle. Everybody remembers everything differently. And your style as a writer affects the way memories translate to the page. I’m always more interested in making meaning out of memory. It’s sort of blowing up a memory, and taking a moment to see what else is going on, and how that detail lets the memory grow into a narrative.”

The congruence between remembered memory and factual architecture of scene, or lack of it, is interesting especially because Nina tells me the book she tried to mimic as a very young writer was Sandra Cisneros’ The House on Mango Street. “Fragmented memories quilted together to create a nuanced story?! Sign me up!” Nina quips. So how does Nina weave a story from her fragmented memories? “Memory is so much more watercolor painting than photograph. In memoir, some level of painting is happening. And while some people’s painting is more realistic, others tend to paint more abstract. I’m really interested in writing essays that may feel more abstract but are based on facts. That read like really exciting journeys.”

And while Nina argues that she’s “not [insert any superlative] enough to be a poet” or has never attempted fiction, there is poetics at great play in the writing. In the use of vantage points and perspective, in the use of crystallized imagery. But mostly in the analogy that through three essays, Nina gives us a woman daring to ask and asking, asking, asking for more. Whatever that may be. In this world, a woman asking, even without answers, feels . satisfying.

My favorite moment in the text happens when Nina invokes provocative performance artist Marina Abramović who says that she is, at any given time, three different kinds of person. And while Marina herself likes one kind the best, she’s forgiving herself for being all three at once. Nina leaves it at that, letting the implied meaning sit. This is a writer willing to forgive the parts of her we read on page, and quietly asking us, the readers, to be as forgiving with ourselves.

You can buy I’m Trying To Tell You I’m Sorry at Amazon or from Black Lawrence Press.

Nina Boutsikaris is the author of I’m Trying to Tell You I’m Sorry, out May 15th from Black Lawrence Press. Her essays have appeared in Fourth Genre, Assay: A Journal of Nonfiction Studies, Brevity, Third Coast, and elsewhere, and among the Notable Essays in Best American Essays 2016. She has taught at The University of Arizona, where she completed her MFA in creative nonfiction, The Gotham Writers Workshop, and Eugene Lang College. She splits her time between the Hudson Valley and New York City. 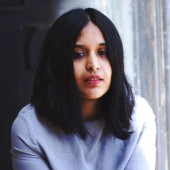 Meher Manda is a poet, short story writer, journalist, educator and the Interviews Editor at Atticus Review. She is the author of "Busted Models," forthcoming from No, Dear Magazine in Fall 2019, and her work has appeared in Bustle, Firstpost, Scroll, Forbes, and elsewhere.