Brad Winslow wonders why the father and son sitting in seats 1 and 2 in Row G in Section 512 won’t stand, if only half way, so that he could have an easier time getting to seat 7. Why do they remain seated, forcing Brad Winslow to step over their knees and in between their feet?  Not only do they not move, but the father also mumbles, “Christ”, when Brad Winslow’s crotch passes in front of his face, as if Brad Winslow has no claim on seat 7 or the path thereto. Brad Winslow wonders if the world is full of jerks or if his world is full of jerks. How would he figure that out? Some kind of survey, but how do you quantify a jerk? Surely mumbling “Christ” into the crotch of someone who just wants to get to his seat in time for batting practice qualifies. Right? Brad Winslow (metaphorically) puts the question in his pocket so as to enjoy batting practice (BP) without distraction.

But what’s this? Distraction! Distraction is sitting in seat 9 in Row F in Section 512. Brad Winslow (literally, in a small, spiral notebook), takes the following notes about her appearance: strong jaw, eyebrows thicker than the national average, small nose, turned up, a mouth that smiles when she says, “One, please”, and cheekbones that tie it all together. If Brad Winslow were the type of guy that noticed the color of someone’s eyes, he would see that her eyes are the color of today’s sky, which is to say they are high sky blue. But Brad Winslow, for some reason, does not notice the color of people’s eyes.

The woman in seat 9 receives the hot dog and gives the vendor the money with the same hand, in the same motion. Brad Winslow has never considered – never even thought to consider – that there might be a right or wrong way to receive a hot dog from a vendor, but now he knows, he has seen with his own eyes, the one perfect way. He scribbles in his notebook, words and diagrams, desperate to understand the exchange and if it could be replicated, and, if so, could be replicated by him, Brad Winslow, and if it could be replicated by him, should it be, or was it a distinctly feminine way to purchase a hot dog? There were answers to these questions, as there were answers to all questions, including the question of how to best apply ketchup and mustard to a hot dog. Answer: the way the woman in seat 9 is applying it right now! Brad Winslow knows he is in the presence of greatness. Brad Winslow is watching the woman in seat 9 eat the hot dog bite by well-chewed bite, each bite taken with consideration, and he can’t stop watching. He closes his notebook because he feels dizzy. If she is this good at purchasing and consuming a hot dog, she probably also knows the perfect way to tie a knot in her shoe, and the best place to sit on a bus, and the most effective months of the year in which to get a haircut. Why is she at a baseball game alone? Brad Winslow knows why he is there alone, because he is a friendless thing, but she must know how to make friends. Maybe she is there because she knows what she likes, and she knows how to get it, and two of the things she likes are going to baseball games alone and eating hot dogs while she’s there.

The woman in seat 9 does not eat the last bite. Why does she not eat the last bite? Perhaps it is all bun and no dog, perhaps it is overly soggy with condiments, or perhaps she is full and doesn’t see the need to eat one bite beyond her satisfaction. Whatever the reason, she wraps the last bite in the wrapper and drops it at her feet. Brad Winslow draws a map in his notebook, X marking the location of the wrapper. For the rest of the game, she doesn’t talk, doesn’t text, doesn’t tweet, and when the game is over she stands up and leaves.

Brad Winslow documents her every move and stays seated until the rest of Section 512 departs to the concourse. Then Brad Winslow drops to his hands and knees, refers to his notebook, locates the wrapper, and removes the uneaten bite. Brad Winslow turns it between his thumb and finger. There is a little bit of dog left in the bun, but no ketchup or mustard. Brad Winslow pops the piece in his mouth and wonders if maybe, just maybe, this is his first taste of love. 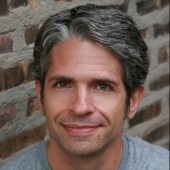 As a child growing up in northwest Pennsylvania, Matthew Robert Lang had an inexplicable fear of gorillas. Now he lives in Chicago with his wife and daughter. His work has appeared in McSweeney's Internet Tendency and Our Stories. Regarding the gorillas, he is doing much better now.