A Little Life with Metallica I was six years old when I fell in love with Metallica. In 2001, my uncle Simon had started learning the drums. A year later, his drum set had its own little room near the entrance of his building, and that’s where he practiced rock and metal songs. I vacationed in Lebanon every summer, and in 2002, he was persistent on learning Metallica’s “Master of Puppets,” the most complex song I had ever heard. He would almost perfectly mimic the drum line, sometimes he even pulled off Lars Ulrich’s expressions of the stuck-out tongue and the clenched jaw, his teeth expressing impossible ferocity. I was dazzled by his fire. I never saw Ricky Martin or Lizzie McGuire do this. The electricity in my body almost always matched Metallica’s energy—voltaic and intense.

Growing up with a band is a magical thing. There is an unconscious attachment of moments to songs that occurs, almost permanently preserving what could be forgotten. Like, my parents scolding me for kicking the passenger seat, leaving dusty Chuck Taylor imprints on the grey upholstery facing me. The car was not ours. The imprint was of an angry teenager’s. I did not want to leave her grandparents’ coastal home to go to the mountains. The angry soundtrack of that unwanted trip was a Metallica album, Reload. I sulked in the backseat, looking outside the window like a depressed protagonist would in the movies, watching blurry versions of the towns go by at high speed.

I put my trust in perfect arrangements of melodies and vocals to safeguard my memories and the people in them. My life is reflected in accessible CD’s and cassettes and streamable digital files. My greatest secrets are kept between my heart and the music. Through the chords are a record of my old self. The songs have become my closest confidants. Only “Nothing Else Matters” knows what it was like to lose someone I loved. Only “Frantic” really understood the destructive angst that followed. Only “Fuel” added a little more light to brighten the days. Only “Astronomy” kept me from giving in to blind rage.

Simon moved on to cover many other bands, as I hesitantly proceeded with exploring new groups and the new genres. Every band had their own sound, and they were all so goddamn good. Picking a favorite was like picking a favorite child, but there was always a whisper. An incessant bang on the table: Metallica. As much as I would sing along to the AC/DC’s and head bang to the Pantera’s, there was something transcendent about listening to Metallica. Only James Hetfield’s raspy vocals was allowed to seep into my skin, to slam-dance with every one of my cells. Only Kirk Hammett’s guitar riffs gave my blood a soundtrack with which to flow, the band’s bass and drum beats acting as tiny heartbeats, making my body a home for the music.

We were inseparable, until we separated.

Around 2009, the band and I had a surprising falling out. With time, I cleared the space for new music to come into my life the same way as Metallica. It was cooler to sing along with the pop songs in the club. There was a whole other world of music I wanted to get lost in. I moved forward to another dimension of culture and life.

In 2020, I run back to Metallica to save me from the world like they once did. I lean on the same vocals that once meant the world to me, to perhaps take me back to that same world I rushed to forget.

“Wherever I May Roam” is the score of a simpler time, where Beirut had not yet broken my heart. When the starting gong of the song goes off, I am transported to a lively city, its summer air suffocating, sweaty, and infused with Arabic coffee grounds. Its days colored with the sea, ancient buildings and watermelons, while the heartbeat of its nights are aligned with the drum line of the underground metal bands performing underneath the asphalt of Beirut’s façade, tarnished by the boots of the cops trying to shut them down. Satanists, they called them. They fear what they would never understand. An energy they could never reach.

“Battery,” I am having my first kiss in the alley behind the restaurant we had dinner in, worried about my braces getting in the way. I was unaware of how nothing gets in the way of teenage hormones. I know that now. We were both wearing black and he smelled like cologne. In hindsight, I think it was his father’s—it smelled too grown up.

I am with a lost love in some songs. We are rocking out to “Enter Sandman.” He was part of the underground Metal scene’s crowd. He had seen Simon play the same songs. He loved them too. I wanted to join him the next time he went to the concerts, unaware that this would be our last time together, here under the green vines of the summer, stretching like an eternity above our heads, until the music stops and my world turns into dust.

When “The Unforgiven II” plays, I am in the same mountains I had dreaded and kicked the seats over, unaware that the house we stayed in all these years is now almost abandoned and unlivable. I am laying on the salmon-colored couch on the patio, the sun peaking through the leaves of the massive tree hugging part of the patio wall. The sun is burning my skin. Though I am not angry this time. I am sorry. 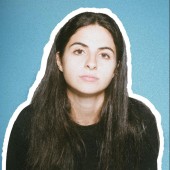 Maria Sakr is a Lebanese writer and photographer. She was raised in Dubai, and is now based in NYC.