A Map of Kex’s Face It is not down in any map; true places never are.

A woman knows the face of the man she loves as a sailor knows the open sea.

How does one begin to map a face?

How does one begin to map anything? You begin with a scale.

The traditional map renders three-dimensional space into a two-dimensional diagram, rendering the Earth as a bird might see it, where every mile is reduced to an inch.

In four dimensions, one must also allow for time to make its headway into the map, so that one develops an appreciation for the changing nature of landscape, and of history. Four dimensional maps established the reputation of our Department of Cartography, here at Eidon.

I first became interested in faces when I was a student. They’re so interesting, aren’t they? These windows to the soul.

If the Earth, and all its rivers and forests and roads and mountains, are the windows to the body … ah, but my metaphor is not right. I believe this may be part of the problem.

You see, I am not sure, even now, that a face can be mapped. We may not yet possess the right cognitive tools. Still, I am trying. The first cartographers, especially in the Islamic World, were hated; despised. Such diagrams did not represent the elegant and complex relationships between men and god that built the Islamic Caliphates, some men cried then. And they were right. Maps are simplifications, designed to help us forget certain things, in order to focus on others. Maps do our thinking for us, you see. They are shortcuts.

Nothing wrong with shortcuts, as long as you have a reasonably good idea why you are making them.

Why then, did I start to map Kex’s face?

I love him. There is that reason. Though we are no longer lovers.

Perhaps there is no other reason.

“You see this region here?” I pointed at Kex’s left cheekbone on the diagram I’d drawn on the board.

I glare at my graduate class, waiting.

Martin says, “It’s a small hill, the cheekbone. It provides character for the face . . . but we’re looking at it in isolation. It’s almost toroidal, on its own, a rising arc. But what does it mean, professor, to pretend that the cheekbone isn’t connected to a face?”

“This is what cartography is,” I say. “Accenting some characteristics and ignoring others. Drawing some things and not others. Deciding where the map ends. In this way it is like consciousness, which is a phenomenon, a self, that is always deciding: what do I need to know, and what do I not need to know. So again, what does the cheekbone tell us, all on its own?”

“If we see it in isolation, it’s lonely, but we don’t know why,” Sahar says.

“Because it’s a rising plane and seems to invite lowlands, naturally, but the lowlands are not there, the cheek is not there, nor the eye socket. Just this hill, with nothing below it. It is lonely; like a language isolate, like the nation of Hungary, parachuted into the Carpathian Valley, without cousins or overlapping history, writing itself into being from scratch.”

“But not quite from scratch,” I say.

“Almost from scratch,” says Martin. “Whatever was there before is also inaccessible, to the conscious mind, we can only imply it was there through reason, or through dream. Through the imagination. As we imagine this silly cheekbone of Kex’s must have been something else before, before it was this.”

“Good,” I say. “But why draw the map at all? Don’t we know Kex? What does this map accomplish? We know what the man looks like. We know he has cheekbones and that they have a particular shape. Why consider them, or any part of his face, any feature of a landscape, in isolation?”

Sahar rises suddenly and bares her breast to the class. Her face is stern, and watchful.

“In isolation,” she says. “My breast is only a rising arc, only a hill with a summit. Its character derives, in large part, from its function as an organ. But since I have bared it, here, where there are others to see it, this breast is no longer possible to be seen in isolation; I am connected to it, and you are seeing it. You cannot consider the features of my breast without considering me, Sahar, and your own relationship to me.”

She slipped her breast back into her blouse and sat back down. There was quiet for a moment.

I am afraid. Because I am remembering other reasons why I began to draw this map. 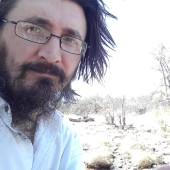 Robin Wyatt Dunn lives in The Town of the Queen of the Angels, El Pueblo de la Reina de Los Angeles, in Echo Park. He is 33 years old.