who nicknamed himself Dribble

who used to be a high-school basketball star

but my friend Shawn loved baseball

at least as much as getting stoned

who fell from the sky

What an angel that guy was in right field

locomotive on the bases

a steel mill at the plate

who led the Pirates to two championships

who blasted a solo home run

and all of Pittsburgh exploded with love—

while the transistor radios sang.

“Not my Roberto Clemente” Shawn said

with hands to palm a human head

The life Shawn led was not the life

Never had it been more clear than standing

in this shithole apartment in Youngwood

clutching what remained of his childhood

in one hand and a cold Budweiser in the other.

to an ex-jock drug dealer

unless it saved some kids

and that kind of love and dedication

was the kind of thing that made Shawn want to get stoned.

We all can’t be you.

And Jesus, it was Friday and the world was still the world

and the Pirates hadn’t won the Series

in almost a decade.

Shawn dropped it on the table

baseball safe in his memory

his pocket filled with a bag

rumored to be some very primo weed. 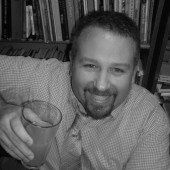 Dave Newman is the author of the novel Please Don't Shoot Anyone Tonight (World Parade Books). His new novel Raymond Carver Will Not Raise Our Children is forthcoming from Writers Tribe Books in February 2012. He lives in Trafford, Pennsylvania.