A Myth of Maize

She’s ready before the lightning comes. All day a heavy, wet air had hung over her and now the swollen gray clouds wait. She can smell it, the same way she can listen to the stars. She works with the ease of the obsessive, the reverence of the superstitious, goes around her house and drapes every mirror with old bed sheets, tapes them up like windows boarded before the wind blows them right off her house – and it’s her house, she can hardly believe it, fresh as grass and stinking of cardboard the way all these readymade houses do, with the newness of her American dream come true.

So when the lightning hits, and it hits with a forceful anger on that Florida ground, her mirrors are covered, hidden from it, and she sits on the floor of her living room feeling the earth shake.

It’s the Maya in her, she told her husband the first time he saw her do it. But he still doesn’t understand, laughs at her Third World ways. He’s ten years older, a kind, terrifying gringo. Red blotches on his white skin. Blue eyes that enamored her when they met in her old village, the faraway india and the stationed soldier. How many times has that story been told?

She’s glad he hasn’t come home. Alone, she can breathe the electric air and imagine that she’s back in her old house, listening to the wind against her cashew tree and the thunder of her skies.

He’s told her many times in his funny Spanish that she isn’t there anymore, that she doesn’t have to hold on to that silliness, and she wants to explain that these things aren’t done out of fear or guilt or custom – that a part of her belongs to Chaac and his storms, just as her soul belongs to God. But her English lacks, the same way he lacks the knowledge, empathetic or genetic, to understand. She can’t put into broken foreign words something so private, her very own ground zero, the weaving of the language that molded her, and she doesn’t want to, either. She has come to realize that English has no spirit and her husband has no heart.

Outside, separate from the light and the sound of the storm, she hears his truck pull into the driveway, sees the headlights through her draped windows, mechanic, man-made. Her skin feels as though the lines that hold her together are moving – moving with the patting of the rain that drops, infinitely and infinitesimally, her skin loaded with the energy that falls from the murmuring stars. As she stands, a brief, sad breath leaves her, and she begins to uncover the mirrors.

And that’s how her husband finds her, on a step stool, her india hair in a braid, her hands removing the last of the bed sheets, resigned to that age-old yearning for home. 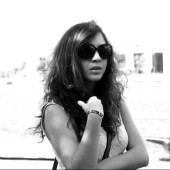 Sofia Fernández Nuñez is a Honduran graduate from the Savannah College of Art and Design. She was inspired to write this story by the women she grew up with, who follow this ritual without knowing why.