A Novice’s Guide to Aikido I’m not entirely sure how I came to stand where I am: there was something about needing to restore discipline to my life, to uproot that alien and sluggish presence taking residence inside me and drive it out like an old rat from its nest; and there was the noble motive of encouraging my daughter to master the arts of self-defense, because who knows, one day she might need to grab some cretin by the wrist or shirt collar and cartwheel him onto a barroom floor, freezing him in the spotlight of a shattering and imminent pain. Or it went something like that.

But whatever mix of half-formed motives suggested the idea, I now find myself standing in a martial arts gym room, peering down at the mat. It looks very solid and real. The color is blood-red, and there’s an odd sweat-saturated odor that I don’t recognize, one that mouths the word ouch.

I am 43 years old and should be in an armchair, a cold beer in hand, exercising my imagination (which is work enough as it is). Instead I’m preparing for “warm-ups.”

This is a term I really can’t complain about much, because it’s quite descriptive of the literal process of getting ready to practice aikido. In a matter of minutes, you feel a tropical heat migrating from your puffed-out cheeks to your increasingly addled and oxygen-starved brain. And if you’ve committed the rookie error of eating recently, you may also feel the “-ups” part, only originating a bit lower in your anatomy and riding the gastric elevator towards your gaping mouth.

Sensei, I’m thinking, there are probably two things to mention before we begin today: One, a slight issue in the lower back, resulting in occasional extreme distress; and two, a broken ankle suffered some years ago on a soccer field. I only bring it up now because, in the event I have to retire from the mats for a moment or two, I want you to know my reasons are honorable.

Of course, I don’t say any of that. I just dive right in.

We are well into the warm-up period when the real life lesson begins. To practice aikido, first you have to learn to fall. Falling would seem to be a no-brainer. I have fallen down many, many times in my life. I have slipped, tripped, tumbled, flopped and slid. Once I leapt from a high creek bank to catch a tree limb, thinking I would swing like Tarzan over the rushing water. Unfortunately the limb failed to grasp its critical role. On that occasion I did a splat.

Perhaps surprisingly, falling does not come naturally to us. And we mostly go about it the wrong way.

Imagine that a blast of hurricane force wind hits you full in the face. You tip backwards. You’re in mid-air now, heading for a hard landing on your backside. What do you do?

Or a more mundane but likely scenario: you’re running to catch a bus, trip on the sidewalk, and go hurling forward at a speed perfectly suitable for an Olympic bobsled team rounding a tight curve in the track. Again, what do you do?

If you’re at all a normal person you probably answered: “I throw out my arms and brace myself.”

Right—but wrong. In reality, the instinct to protect your body (specifically the head) by treating your arms as if they were load-bearing steel beams is an unforced error in judgment. Your arms lack necessary reinforcements at the elbows and wrists. Thus they have a tendency to behave like that rotten tree limb by flagrantly ignoring their responsibilities to you. You thrust them out and hope for the best, they shrug back at you and snap. This is the quickest path to the back of an ambulance.

This is why aikido emphasizes ukemi, or the art of falling correctly. The gist of the techniques is to absorb the energy of your fall over a broad surface area and redirect it away from you. For example, when falling backwards an uke (code word for the person getting manhandled) spreads his arms like a bird in flight, slapping hard against the mat as he makes contact. Or say he’s flying forward: either he lowers his shoulder into a fluid roll, or he performs the roll while airborne and lands on the opposite side, leg extended, slapping his arm as above.

In both cases, at least on a gym mat, the fall is rendered harmless.

I don’t know why it’s taken 43 years for me to learn this incredibly basic lesson in physics. What did they teach us in K-6 gym, square dancing aside?

I bend my knees and drop back, really getting the hang of it now, smacking my arms down in time with the class (a satisfying drumbeat reverberates in the room) and wheeling up onto my feet, feeling (just a few minutes in) like a bona fide black belt in the making. That’s when the annoying bitch in my lower back decides to scream bloody murder.

To recap: it’s my very first class. I’ve survived maybe a third of the warm-up period. Like, five minutes of exercise. And now my lower back is lodging a squealing protest with its Human Rights Commission, and there’s a lot of stern-faced mumbling and grumbling going on behind closed doors. For a brief moment I consider a very early retirement from aikido. Cameras rolling, speaking philosophically into the mic: “The desire’s still there… but you know what they say: Father Time never loses. His record’s undefeated.” But did I mention I’m in class with my daughter? My teenage daughter?

Right. So I hang in there. Because no way in hell I’m going to be the butt of endless “old man” jokes.

I’m still listening to the longwinded accusations from the Commission when my sensei instructs the class to do push-ups. Well, thank the Lord. Push-ups have been part of my personal routine for decades, ever since I decided to become the greatest kick-ass rock-and-roll drummer you never heard of. Early on I realized that appropriate arm muscles would be in order. I’ve done push-ups flat-handed, on my fists, using bars, whatever. I got this one.

At this point my sensei drops into good old plank position—only hold on. Something about this isn’t right. Something looks different. Belatedly, I identify what it is: the man is balancing on his wrists. What I mean is, make a fist and imagine you are standing on your knuckles. Then roll your hands down flat until they face inward, palms up, like inverted seal flippers, and your weight rests entirely on the jutting bone of your wrist. O00uch.

By now a bunch of restless questions and sensations are machine-gunning through my head: Is it safe to do this? Could my hands possibly break off? Damn, how is everyone managing this? How? Excuse me, sir, but the Commission has reached a decision… Can I hold out much longer? And why, God, why are we doing this? …Requests additional time to look into complaints of systematic negligence and abuse, during which time you shall be subject to sharp and unrelenting pains in the… Is this martial arts? Is this what aikido means?

I can’t help it: I’m up on my fists. Faking it. What the hell. At this point, I’m just saving my pride. 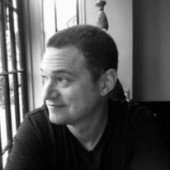 Aaron R. Even is an award-winning novelist and scriptwriter whose television work appears on National Geographic, Discovery and Smithsonian Channels. He holds an M.F.A. in fiction writing from the University of Virginia. His aikido belt level is, admittedly, not so impressive.