A Place Under the Bed There was a place under the bed

for her bass guitar.

to wonder about man’s tendencies to mistake

A place on the tip of her tongue

More places on the chessboard

than there had been a few minutes ago.

An empty box for the cassette tape,

another for the two opposed armies.

There was something wrong

with the other box:

She put the television on mute,

and silent bi-planes filled the room. 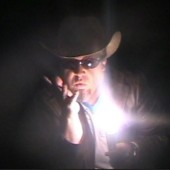 Glen Armstrong holds an MFA in English from the University of Massachusetts, Amherst and teaches writing at Oakland University in Rochester, Michigan. He also edits a poetry journal called Cruel Garters.