I have a friend named Thomas. I suppose it is more apt to say that I am friends with Thomas’ front door. He recently had a home security system installed with a new feature that notifies the home owner via their cell phone when someone is knocking on their door. Now when I step onto Thomas’ welcome mat, my image is recorded in real time and relayed with a notification to Thomas’ cell phone. He can then choose to screen the call like a regular phone call or answer the call and talk to me through an audio device on his front door. Thomas and I had a fight several months ago and since then he refuses to answer my calls or come to the door when I know for sure that he is home and, wherever he is, I can feel him watching me. He can watch me from anywhere in the world, humiliating myself over and over again with the sad knocking and then the dejected shuffling down his front steps, as long as I engage with his front door. I have known Thomas for a quarter of a century and I can feel his presence and his absence in any place. I can feel him through his front door. The feeling that I get when Thomas is not at home is an awful, sinking feeling in my stomach. The feeling that I get when Thomas is at home is my heart filling with happiness. When he is not at home I talk to his door and Thomas watches me and I feel that, too. At times I can feel him watching me with amusement; at other times I feel his anger and his smugness because he now has the power to punish me in this ridiculous fashion.

It’s a very handsome door and the wood is fragrant and so I don’t mind the time spent there. It’s a dependable door, always there right where I expect it to be, and it never promises to be open when I know it will be closed. Sometimes I press my face against the door and breathe it in and it is warm and slightly yielding to my touch. The door welcomes me, the mat welcomes me; I guess two out of three ain’t bad. I have started dressing up for my visits to the door. At first I did it only when I was fairly certain that Thomas was at home, but now I do it all of the time. While I am bathing in subtle perfumes and clothing myself, I no longer think of Thomas, I am thinking of the door. The door doesn’t hurt me with its silence and I’m sure it would tell me a story if it could or maybe it would even sing to me. The door doesn’t shut me out on purpose and I can feel the life within it wanting to burst out and fling itself open for me. The door understands my pain and confusion, once being a beautiful tree deeply rooted in the earth, so happy and confident that things would always be that way, but then being torn from the ground and cut to pieces without any explanation. The door cried sticky tears, every blow more painful than the last, and now it cries remembering those moments and remembering what it was like to be whole.

I see the sad woman coming up the stairs again and I warm myself for her. She is always so cold and I want to make her comfortable so that she will keep coming back. When the woman presses herself against me, I feel happy and whole; not all the way whole but sort of that way like before. I feel the smooth vibrations of the woman’s voice as she speaks and the vibrations become gentle thudding when her heart is pressed against me. The man who lives inside the house is cold, too, but in a way that I can’t help. I am hurt every time the man goes in or out and carelessly shoves me open or slams me shut. To the man, I am like the woman; something that he thinks will always be there and, thus, can be taken for granted. I, like the woman, do not figure prominently in the man’s value system. When the woman was a sapling, she and the man from inside loved each other with a sweet and tender love. They treated each other like delicate treasures yet fiercely guarded their special affection by hiding away from the world so that what they had would not be sullied. When they were saplings, they were bold and free and walked around in storms without any covering, daring the wind and the rain to beat against their skin. Sometimes they would tear a strip off of each other in a friendly fight, but mostly they would hold hands and embrace tightly and it felt as though the strength of that embrace would keep them together always. The man’s heart has grown stony and cold and it beats like the drum of an enemy. The woman whispers these things to me, not wanting the man to hear, and she turns her back to the camera so that he will think that she is just leaning on me. I know the woman and so I love her. She has been treated with gentle hands that turned into weapons, just like me.

Tonight I bathed in sandalwood oil. I am wearing brown corduroy pants and a green turtleneck sweater. I want the door to feel at home with me. It does not feel at home in Thomas’ house. There is no love in it because he will not let any in. The door tries to love Thomas, too, but Thomas just shoves and slams the door harder for its efforts. I pack a bag full of tools and other items and set out for Thomas’ house. He will not be at home. He is working the night shift selling poison to lost souls. At Thomas’ house, I rush up the steps and press my face against the door and breathe it in. With my back to the camera I say to the door, “I will be as gentle as I can. If I hurt you, please forgive me.” I move around to the side of house behind some bushes and put on gloves, a dark jacket and a balaclava. When the night sky is at its darkest and the street is silent, I dismantle the alarm system and then move around to the front again to remove the audio and video devices from the door. The door says, “Thank you.” I pick the lock and open the door so that I can get at the hinges. I start hammering away as quietly as I can. The pins come out easier than I expected. The door says, “I made myself oily for you.” Then I carefully move the door out of its hinges. It is solid wood, but it feels very light. The door says, “I made myself light for you.” Then the door and I make our getaway. I lift the door over my head and carry it to my pick-up. Once it’s lying flat in the back, the door makes itself heavy again so it won’t fly out in transit. I don’t cover the door because I want it to enjoy its freedom and to see the stars and enjoy the night air. I ask the door, “Do you want to say goodbye?” and the door does. The door says goodbye and the trees wave and the night birds sing and the moon beams. The door does not say goodbye to the house. I close the back of the truck and smile as I get into the driver’s seat. Thomas will know that I stole the door because I was the last person recorded in front of it but he will not know that I moved earlier today. I packed everything up in boxes and left them at a donation depot and then returned my keys to the landlord. Thomas will return home and destroy his belongings in a fit of rage. When he goes to his martial arts classes, during the next month or two, he will be especially brutal. I take one last look at the house and I don’t say goodbye, either. The heart of that house is with me now. We hit the road, destination unknown, and I swivel my head around to look at the door. It is glowing. I know the door and so I love the door. It has been treated with gentle hands that turned into weapons, just like me. 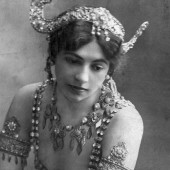 Michelle Gray started writing in her early twenties. She has written and published short fiction pieces and poetry and has also written and performed in short comedy skits in Toronto, the city of her birth. In this city, Michelle survived a violent home invasion which changed her life dramatically and also her voice as a writer. Michelle took a sabbatical from writing in order to heal and to allow her voice to transition into one that, today, is more authentic. She started writing again in 2010 and kept on writing until she produced some pieces that were worthy of publication. Michelle was published in the literary journal Florida English (Vol. 9, Print) in 2011. She is a dual citizen (CAN/U.S.) and has lived, attended university and worked in both countries. She didn’t learn much in university but falling in love with her Sociology professor in 2009 was the cause of Michelle starting to write again; for better or for worse. She welcomes feedback at m.gray.feedback@gmail.com.