The afternoon had longed at the inlet,

pulled from the same water lapping

at our feet, the feel between our toes

the same as on our tongues.

The raccoons had made a mess of things

in the night, as they often do,

outwitting the trashcans built to foil them.

They built crosses with torn up cardboard

and left them like a runway into an overgrowth

opposite the soft, wet sun. A party clanged

behind us, but we were on to something.

In the dark, we bled without feeling it,

gripped by the animals and their chatter.

held in their song, floating, sleeping. 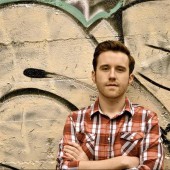 Ryan Mattern holds a B.A. in Creative Writing from California State University, San Bernardino and M.A. in English from the University of California, Davis. He is the recipient of the Felix Valdez Award for Short Fiction. His work has been published in Ghost Town, THE2NDHAND, Poetry Quarterly, and The Red Wheelbarrow, among others. He currently serves in the United States Army.