When I got to thinking about what kind of “bonus material” I might be able to come up with that related to BACKSWING, I thought that the kind of behind-the-scenes stuff I myself often like is process-oriented — how did someone do this; what were the steps to get from here to there — and at some point that idea opened up and into looking into the process of the cover design. I don’t know if others will find this interesting, or if it’s just me, as someone who has toyed with a little design myself, and also… it’s my book, but I’m super happy with how the final book looks and I wanted to both praise Brian’s design a bit and dig into the stages and process.

AB: I thought we’d start where you started with the design of the book. Pretty early (first thing?), you sent me an email asking if I could give you “three words that represent the feeling of the book” to me. Is that your “normal” process? Can you talk through how you start a bit, how those words help you, maybe even what kinds of words people tend to give you?

BM: That is typically my process. I like to get some descriptors from the author and the publisher so I can get a sense of what the book feels like when you read it. If the author says, “a little whimsical but strange” versus “stark with a lot of violence” I might design two really different covers. If I can get a copy of the manuscript, or even just something from it that represents those feelings, it can go along way to getting my imagination primed to come up with something appropriate. Still, it doesn’t always work in the first go at it. But even if I don’t get it right the first time around, it’s a useful process that moves the design forward.

AB: I want to dig in to specifics of Backswing, both to self-centeredly keep this focused on me but also because specifics are often more interesting than broader generalities, but I am first curious… have author and/or publisher words ever been at odds with your own first impression or ideas of a manuscript, have you ever been especially surprised at this early stage. I guess, broadly, anything especially interesting about this first step in the process?

BM: So far no authors or publishers have described a manuscript differently than it seems. Because this is a client relationship for me, even if I see the manuscript as something other than what they describe, I have to take their lead. If the author says the book is a sci-fi murder mystery, but I look at the book and see a Coover-esque family drama, I kinda have to go with sci-fi murder mystery as the target feeling for the design because that is what is being asked of me. Good lord I hope that never happens.

One thing that can throw a designer, or at least me, for a loop is when an author or publisher gives me a piece of art to use that I don’t really like. I feel a little stuck with an image that I would never use for anything but I have to use it in a prominent way. Usually I just try to subvert it someway so that it is still used in the design, but at the same time is used in a way that keeps me interested in the project.

AB: Then, to follow that up, can you talk a little bit about this first draft? And/or were there possibly even any ideas or starts at something before this image you first shared? BM: Backswing is a cool title, so even without any help or the manuscript, many potential images are conjured. Then, I asked you for your few words on the book and the ones that stuck out to me were “myth-making” and “masculinity/fatherhood.” Also once I got reading, I noticed that automobiles play an important role too. I let that slosh around a bit and came up with something that made me think of childhood. Something about the sun, behind blinded by light and youth, and growing into a man, perhaps led by your father-figure. And then using a van as a central focal point as a nod to one of the important stories. I like a lot of the elements here, but ultimately I think it didn’t match the manuscript enough. It was too clean and maybe too mod.

AB: That’s really interesting — I just did another interview where I was trying to talk around whether/when I knew stories were done, sending them out before they were ready, whether some part of me actually knew at the time that an early draft wasn’t ready or if I am only seeing and saying that now in hindsight.

I remember when I saw this draft, you sent along a paragraph kind of explaining your thought process with it. And I remember thinking that the paragraph seemed spot on, and you seemed to be driving toward a line of thinking that I was really excited about, and though I like this cover, it seems…just that. Maybe “too clean,” maybe a little too bright and/or cartoon-y.

I don’t know if there’s a question here so much as maybe just a prodding to get you to walk me through the next step or two — you “dirtied” up this version some, and then the next thing I saw was totally different, a version of what the cover is now. This is probably too “inside baseball,” but I love that kind of stuff and so I guess I’m just curious to be walked through it a bit?

BM: Realizing that a story wasn’t ready to be sent out long after you sent it is kind of tragic. I definitely did that as a young writer. At the time I thought, yes, this is done. Then much later I thought, huh, that wasn’t done yet, weird. As far as the first design goes, I felt good about it and sent it in order to get a reading on the gauge. I think I work better when I have more input along the way.

The next step was, as you wrote, dirtying up the design. I smeared some stuff and literally added some digital dirt, etc. I think that made this particular design better, but it wasn’t the cosmetics that made this design not quite right for the book. It was the concept. Your publisher asked if I might do a second design to choose from.

I still liked the idea of a vehicle or something vehicle-oriented for the focal point. I went into Photoshop and Illustrator and messed around with a lot of different trucks and cars, vectorizing and distorting them.

At some point I thought about lines on the road. I imagined a double line down the middle and found a few photos online that I could play with. Ultimately I liked a single line with the vanishing point at the top of the book. There weren’t any royalty-free images online that worked though. I’m also a filmmaker so I took my good camera out and walked around my neighborhood looking for a line. I took a ton of photos of road lines. Eventually, back at the ranch I found one that worked. It was a white line but I wanted a yellow line, so I changed it in Photoshop. There was some other toying with affecting the gravel, but we settled on color grading it with some high contrast. Then it was finding the right typefaces and placement. AB: I think that just about gets us to the final cover. I’d love to talk about the filter that was there and then not, and the shuffling of the boxes on the back for copy, and font choices, but those seem kind of small and mundane and I’m not sure I have an actual question other than that I just sometimes like digging in to the small and mundane. Instead, I’ll end on the note of as you both designer and writer — what was it like designing the cover for your own book, The Quantum Manual of Style? Do you ever think about design when working on your own writing? Do you think, with future titles, you’d want to continue designing your own covers or would you be curious to hand it over to someone else to see what they might do?

BM: I definitely didn’t think about the design of TQMOS while writing it. After it was written, but before it had been accepted, I thought it’d be fun to design something for it. Kind of never intending it to be used. Just a fun exercise. It turned out I really liked what I came up with and my publisher did too. So I kinda got lucky that way. I have a book of strange little stories called Small Atoms that I’ve tried to design a cover for, but would actually be more excited to let someone else figure it out. Someone like Alban Fischer or Julian Montague. They do such incredible stuff that I’d love to see how they’d represent a book of mine. But that book hasn’t been accepted anywhere yet so it’ll have to wait. First things first, you know? 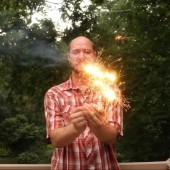 Aaron Burch is the author of the collection of stories, BACKSWING, forthcoming from Queen's Ferry Press, and the poetry chapbook, BETWEEN BUFFALO AND BISON, forthcoming from Publishing Genius Press. He edits HOBART, another literary journal.