Absurd, Infuriating, and Seductively Wrong: A Review of Naked Me by Christian Winn In his story collection Naked Me, Christian Winn achieves something that readers of good fiction seek and rarely find: human life on the page. His characters are just like us—flawed and complex, often selfish and sometimes kind. Also like us, their behavior is sometimes more terrible than they are able to understand in the moment. But wonderful, unexpected contradictions emerge, and these complex human beings are extremely enjoyable to spend time with—especially when they are up to no good.

In the title story, the protagonist, a member of an illegal poker operation in Boise, points out to his cohorts a young woman in the apartment across the alley. When he brags that he’s going to sleep with her—while they watch—we understand that his actions are motivated by little else than a desire to seem compelling to others.

But this retrospective narrator has remorse for his past actions, and we like him. When he winces at his failed persona long discarded, we love him for it.

“The life I was living then didn’t completely seem like mine, it seemed like a close friend’s, or one belonging to a secondary character in a film I’d once seen.”

This guy isn’t so bad, we think, even while his younger self is preparing to gamble with the life and feelings of a young stranger  .

Other characters in Naked Me are less self-aware, but every bit as compelling. Often they miss the mark in their assessments of others, and of themselves.   In “Where He’s Living Now,” a Seattle bartender visits his dad in California, five years after his mother drowned in a rafting accident. The young man has sided with his mother’s attractive carefree nature, against his father’s out-of-touch stoicism, and has even tattooed her maiden name on his arm. Predictably the young man reviews many old hurts with his father.

Less predictably, details about the father creep into the story and contrast with the son’s angry conclusions. The young man’s sister maintains that their father has “started taking on life as someone truly interested in living it.” The protagonist all but dismisses this news, even paints his father in cartoon fashion when he sees him at the San Diego airport.

“Look at him—Panama hat, flip-flops, floral-print Hawaiian togs head to toe—he looks fresh off the tour bus.”  Despite himself, memory intrudes to contradict his own feeling. While visiting, he steals his dad’s car in the middle of the night, the way he used to as a teenager. “The radio is playing the jazz my father likes, and I’m reminded in a quick moment of him taking me to school on his way to the office. I didn’t like to talk much those mornings. I was always tired, and I remember it being constantly dark and wet, but he would ask me questions—What are you learning? How do you like your teacher?”

At another point in the story, he recalls that his father used to visit him while bartending, taking a fatherly interest in his son’s work, and how he, the polished bartender, would look past his dad’s face, too angry and sullen to meet his gaze. The reader, who expects to encounter evidence of the father’s crimes, instead learns more about the coldness of the son. In the best writing, it’s the protagonist who has the biggest flaw.

Naked Me is therefore an extremely rewarding book. Each story subverts the reader’s expectation. We hurry to the next story to find a similar thrill, and get it.

So many lines are fraught with oblique emotional power. “We stop for Mexican food is Turlock where out front you call your brother from the last payphone in the west” (from “Map of California”). “These mornings Tompkins wants to sit beside Bean, like this now, hear Bean tell him one true thing, no matter if it’s a lie” (from “Rough Cut”). “She watched seaplanes and helicopters hum and coast through the rain and began wishing them to fall from the sky, crash into I-5 rush hour, maybe find Lake Union and pierce the water, sink and disappear. Meredith began wishing something like that might fall on her” (from “All Her Famous Dead”).

These young characters are absurd, infuriating, and seductively wrong, while the stories themselves are mature and fully realized. Writing well about youth is next to impossible. In Naked Me, Christian Winn does it again and again. 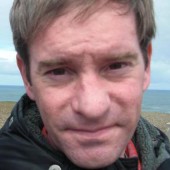 Ryan Blacketter is the author of Down in the River, a novel that has received national attention from Paste, Rumpus, Largehearted Boy, Fiction Writers Review, The Quivering Pen, and elsewhere. Please visit his site to read reviews and endorsements: http://literarycraft.blogspot.com