At first, the poison doesn’t hurt.

A languid coolness spreads through his limbs.

His eyes widen in the torch-flame pooled

around her face, refashioning the darkened crypt

into a cathedral of light. One more kiss, then spasms

drop him to his knees. A thud, dull against the stone floor.

When she wakes, moments later, trembling in the reverberation,

his soul has blossomed free of his world-wearied flesh.

Twenty-five of us watch over these deaths,

the students in rows never quite straight.

Tears roll down a few cheeks; a few mouths smirk.

I’ve let the audio play a moment too long—

the disc clamps the Friar’s voice. He’s intruding, too.

At the first trumpet-note, he’ll flee his grief and horror.

We all fly from the tomb eventually, lungs expelling

breaths we didn’t know we were hoarding.

A movement in the right corner breaks the stillness. Two students

have already left Verona. Jessica’s half-turned in her seat,

around Enrique’s wrist. She’s already taken this class once—

the characters having the same bad luck all over again.

He hasn’t been this motionless all year. In five days,

his family moves him to L.A. The design swirls—

the pair so intent they barely remember to breathe,

the circle they fashion almost complete

in a silence broken soon enough, but not by me. 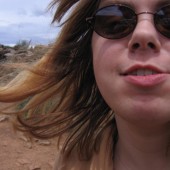 Amie Sharp lives with her husband and dog Sigmund in Colorado, where she teaches English at Pikes Peak Community College. She previously taught high school in Tampa, Florida. Her publications include the Bellevue Literary Review, the 2River View, and the New Formalist, among others. She has been featured poet for KRCC's Poem of the Day and guest speaker for Poetry West. A native of Tennessee, she holds an MA from the University of South Florida and an MFA from Seattle Pacific University.