Alimentary, My Dear What, Son? This is the first part.

Well, I can’t say as I understand why the kid stole the armadillo any more than I can say why anyone would keep one in the first place. The guy’s wife, the one with the armadillo, was an author, kind of famous in a local sort of way, for being the one responsible for A Few More Ways of Using Gravy, which sounds like a sequel, but it wasn’t. I guess it was for people who already knew some ways to use gravy, and there must have been quite a few of those folks. That was in the days when my disease was still hanging out on the lonely end of the microscope. I’ve been in remission since then, but it seems to be changing, and now I’m waiting around to die, the same way everybody else is, except I probably don’t have as much time as they do, which isn’t half so bad as it might sound.

Anyway, they actually put that kid in jail for a quick lesson on account of that armadillo caper, but I guess he had an armful of hauled in and convicteds before he got it into his head that an armadillo was worth hanging on to. Mostly petty stuff it was, but if anybody had been paying attention, they might have noticed how he’d also taken a rattlesnake from the roadside zoo and told the arresting officer how the snake had, “somethin’ to say and nobody was listenin’.”

So I was over there by the dishwasher guy in the restaurant when his buddy comes in with something amusing to say about the armadillo, and He Who Goes to the Bathroom with a Desire for Friendship keeps right on acting like he’s not capable of massive wrongdoing, and I’m still standing there, deep in the heart of the uninvolved section of the discussion, and he’s trying to explain to dishwasher dude how his questions about the armadillo aren’t logical, and not this then but this, he’s saying, pointing to the same conclusion.

And pretty soon there’s this mother and daughter having a “discussion” while at the same time listening in on the armadillo logic course, and the daughter is saying how she thinks the mother is mean and disgusting and never available when she needs her. Mean too. And disgusting. And she’s the only mother with seafood on her blouse. And how she doesn’t really dislike her as much as it sounds like, even if she is so disgusting, and how she thinks the mother might even be mistakenly admirable, which confuses the daughter, who stops to listen closer to the armadillo logic while the mother searches her blouse for additional seafood. No one from a romantic third world country has ever wanted to make love to this woman.

This is the first part of the middle part.

I would have considered stealing your soap, but someone had already stolen it, said the sneezy man.

Don’t take my soap, said the woman. I don’t care how hungry you are.

This is the middle part of the middle part, which is supposed to be longer, but isn’t because we need to remain uncertain who said this, even if we might have suspicions about why.

Well thank you very much, ya selfish old fuck.

This is the part where the daughter and the armadillo expert argue to no avail.

First the daughter looks at the guy like he’s a nut-job, and then the guy gives her this pouty little better-than-you-are lip drama and says, I tried to burn down my head with a cigarette, but it wasn’t my head, so they locked me up for a while.

Like that was going to scare little Momma Can’t Fuck with Me.

Then you must be the one who dies in place of my son, who has not been born yet and cannot die, she flounces back.

And Pouty puffs up a bit further and says, We who art the divine reluctance of fate have no need of you, Asshole. And he makes an exit Sophie Tucker would be proud of, even if he does miss the doorknob first try while he gets his walk just right.

This is the last part of the middle part.

The burglars were short, the victims tall. The things we heard about seemed as real as the ones we knew.

Or noticed how her eyes settled on the tank of his bodily presence.

This is the last part.

Every single day seems to be eating me up.

This is the part that didn’t fit anywhere else, but I liked it so I stuck it on the end.

So all that happens, and then I have to release some unnecessary solids. I think of them as characters, and then I realize they can’t swim.

I mean solids, which are no longer necessary. 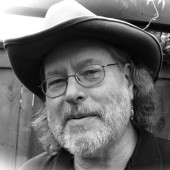 Rich Ives has received grants and awards from the National Endowment for the Arts, Artist Trust, Seattle Arts Commission and the Coordinating Council of Literary Magazines for his work in poetry, fiction, editing, publishing, translation and photography. His writing has appeared in Verse, North American Review, Massachusetts Review, Northwest Review, Quarterly West, Iowa Review, Poetry Northwest, Virginia Quarterly Review, Fiction Daily and many more. He is the 2009 winner of the Francis Locke Memorial Poetry Award from Bitter Oleander. An interview and18 hybrid works appear in the Spring 2011 issue of Bitter Oleander. In 2011 he has been nominated twice for Best of the Net and once for the Pushcart Prize. He is the 2012 winner of the Thin Air Creative Nonfiction Award.