In her story “Vanna” from the Stars issue, Tara Laskowski’s character says, “You can’t outgrow the place you are from, no matter how far you go.” What I love about Laskowski’s story is that there is so much truth packed into such a short space. I have everything and nothing in common with Vanna White. This is the kind of work I hope for as the new Editor-in-Chief—the kind of work that isn’t afraid to take risks, but still kind of digs its fingers into my chest, pulls out bits of tissue & heart, and hands it back to me, artfully arranged.

In the spirit of Vanna, permit me to tell you a little about the place I come from—the experiences I haven’t outgrown.

I have spent most of my life in North Carolina. My brother and I grew up with a single-mom; for better and worse, our environment was a hotbed for creativity. There were moments of alcohol-induced violence and little money, but we weren’t without joy. Despite the fact that my mom was a first-generation college student, she worked hard; with her parents helping us every step of the way, she eventually earned graduate degrees in education. She was the principal of my elementary school. This had its benefits and its pitfalls. My brother and I were both readers and encouraged to express ourselves creatively; however, we spent a lot of time alone. We spent more time at our school than we did at home.

I wandered the halls, rifled through teachers’ rooms, pretended to teach, marking my lessons on chalkboards, and found my favorite space in the empty auditorium. It is there where I first started telling, writing, and performing stories. I was a lonely little girl imagining my audience. By the time I reached fourth grade, I’d written a play and convinced a teacher’s daughter be the only other person in a cast of invisible actors. This might sound impressive, but I’m sorry to tell you the play’s protagonists were Daryl Hall & John Oates. Pride and horror remain all these years later. Thanks to my mom’s discomfort with some of the sexual themes, all evidence of this masterpiece is long destroyed. I blame Madonna’s Like a Virgin record and Daryl Hall’s hair.

As we grew older, my more extroverted brother became a musician and I was always viewed as his little sister or my mom’s daughter. I never felt my own—ever the misfit toy. I turned more to books and writing. Further inward and away. The fact that my father now had a new family I never truly got to know didn’t help. I am somewhere in between youngest child and middle child, and the further I got into teenage years and my twenties, the more lost I became. More books. More writing. I studied English, journalism, rhetorical theory, and creative writing. BA. MA. MFA. While degrees aren’t necessary to be a writer, they were for me. My MFA experience forced me to write a large body of work in a short time and gave me the confidence to try my ass off; otherwise, I was just in love with the idea of being a writer. There were interludes of working in retail or offices, but I have spent the majority of my life in school.

“You can’t outgrow the place you are from, no matter how far you go,” says Vanna. Yes, Vanna. Yes.

The result of all this schooling, reading, and writing is a gal who functions much better in prose than in social settings. For me, one of the most intimate human acts is reading, whether you are reading someone else’s work or they are reading yours. You are holding mental hands across time, space, and culture. We are trapped inside our own minds except in the act of art making. That is why I do what I do. I am casting lifelines for myself and I hope, for others.

Now that I’ve told you a little bit about how I became the writer and reader I am, I thought I’d make some bold pronouncements of love. I would not cheapen these by calling them influences. When I fall, I fall hard. These aren’t all my loves, but this should give you a fairly accurate representation of who I am. I can’t wait to publish beautiful, genre-busting weirdness with you. If you’d like to learn more or read my work, check out my website bethgilstrap.com and follow me on twitter @BettySueBlue.

Thank you to publisher Dan Cafaro, outgoing Editor-in-Chief Joe Gross and Fiction Editor Jamie Iredell, Zoe Henry, Michael Meyerhofer, Matt Mullins, Lea Graham, Jayeeta Ghorai, and Sam Slaughter for your faith in me. I am thrilled to be welcomed into the fold of the Atticus family. 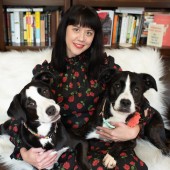