An excerpt from THE COLOR INSIDE A MELON Risto— Aristofano Al’Kair— is a rarity in contemporary Italy, an immigrant success story. Out of Mogadishu originally, he’s earned Italian citizenship and lives now in Naples, with a wife who’s native to the city, and he runs a successful art gallery in a good neighborhood. Towards the start of the novel, he’s set up a private showing for his next exhibition. The ease with which he lures a moneyed buyer into paying extra disturbs him, and he needs a moment alone, thinking back.

He had the Falanghina out, the good summer wine, though it wasn’t yet 11 in the morning. The big gooney bird looming over the photo, a man of decent taste if dubious judgment, had gulped down almost an entire glass and then agreed to the highest price the gallery owner had ever set for a single piece.

Risto excused himself, making for the lav.

Wind & Confusion, the shop’s name, was from the Old Testament, Isaiah. In all the time Risto had been running the place, only a single walk-in had known the source. The prophet was back out on the watchtower; he saw kingdoms swept away, power on earth vanished. For Risto the verse was a lifelong companion, lodged in him since the final morning at the Dominican school, in one of the better pockets around old ‘Dishu. One of the friars had quoted the passage, over Risto’s head and his brother’s. The two teenagers had arrived for Assembly with stomachs growling, the neighborhood had been hit by a new wave of shortages, but all of a sudden they forgot about their UNESCO milk and biscuits. Instead they’d stared up at the school entryway, filling with the soldiers of the Shabab. The machine guns, it had seemed to Risto, were the shape of locusts. But the creature that gnawed away at the apparent world, forever afterward, was his teacher’s recitation.

Since then, who had Risto become? In his undersized lavatory, he kept his pants up and stared into the mirror. No ordinary tack-up, this had a ceramic triangle frame studded, all cockamamie, with broken Fiestaware. A bathroom mirror put together by some local Schnabel, Giuliano Schnabel, the piece had been Risto’s concept. Didn’t that prove he’d earned this place? He had his certificates, the university and the conservatory.

Still, in that mirror, what you had was the look he’d put together for a gallery with an edge. The cliché, Mau Mau: a bullet head and gunbarrel gaze. An ephemeron such as he’d chased, once, all the way from Mogadishu to Naples. In those days he’d had lit­tle more to go on than the name of a man some people called a cousin, others a clansman, either way a passport made of sighs: Eff-tahh. Yet this phantom had landed him finally on an unlicensed ferry out of Libya, and before that, briefly, it’d borne up his brother Ti’aba as well. The two boys had flown together, between wings labeled Eftah and Naples.

While one troop of “New Police” closed the school, others rounded up their father at the law office. By sundown, their mother was reminding Ti’aba and Risto of trustworthy contacts on either side of the Mediterranean. To the North there was that notorious Eftah, a scandal for some in the family, but a cat who always landed on his feet. From him the boys could count on better help than from the family in Alexandria. Also closer by, in the uplands above the city, Maman had country cousins, farm folk, good-hearted. Finally she handed Ti’aba a cloth bag, not quite a shop­ping bag, lumpy with a baggie of cash and what she called “portable valuables.”

A few of those valuables, under ordinary circumstances, would’ve accessorized the outfit she’d put together for visiting the new “administrator in chief.” But, ordinary circumstances? Few and far between, around Mogadishu, and perhaps the only thing rarer was the vision that drove Maman and Papà: the hallucinatory sheen of Paradise ’Dishu, glow­ing more fiercely every time the family went into exile. Maman and Papà saw the Jewel in the Horn, a place they claimed to recall from childhood, sophisticated as the Manhattan of Jackson Pollock. By the time Risto reached his teens, he’d learned that this golden era dated back further yet, to his parents’ parents. He’d begun to understand the impact that could have, the happy recollections of forefathers gone too soon. Then came the night his mother handed over her cash and jewels and strode out into a ghost town run by thugs with guns.

She’d put thought into her ensemble— unseasonable clothes, green and gold of wintry seriousness. The design was her own, the piecework handled by a shop in Villaggio Arabo. She had an eye, Maman, and you noticed even when she’d covered her head and put on plastic at wrist and neck.

As for magic words, Eftah and Naples, those at first seemed to hoist her two sons to a bird’s-eye view. They could look down at their father, rounded up with other lawyers and lawmakers in the first hours of the crackdown. In his holding pen, Papà stood proud and unafraid, and the boys could see their mother as well, shaming the guards into setting her husband free. Meantime Risto and Ti’aba reached the first sanctuary outside the city, just as Maman had described it, a farmworkers’ shantytown. The camp had water, one of the wider creeks feeding the Shabeelah, and the longtime hands claimed that, back in the ‘90s, the grounds had housed a troop of American Rangers. There the brothers hesitated, sitting through first one night (so sudden, that equatorial twilight) and then a second. They weren’t so young, well into their teens, and they could handle complex math and get by in five languages. They knew where’s they’d find the next safehouse, upstream along this same creek, and all their lives they’d been riding some shuttle or other, ’Di­shu to Algiers, ’Dishu to Beirut to Alexandria. Lately they’d even been cadging rides off the friars, practicing their Italian on the way to and from school. Still they hesitated, sleeping on a collapsed appliance box, working through their desiccated bread and fruit. Ti’aba appeared to be waiting for someone to give him the go-ahead, for some course of action to reveal itself. The squat became a surrogate for the school or the household, with the kids on idle before the bell rang for class, or Maman called them to dinner. They had Papà’s Parisian watch, heavy and Gothic, and in the camp the older boy did nothing so often as check the time.

Whatever he was waiting for, it couldn’t have been a squad of on the access road. These arrived the third morning, in a Fiat van missing its side door: five armed men, none with any uniform beyond a bandana.

For cover, the younger brother found a sacred space. He crouched behind a hunk of freestanding oak, a big piece for that country, carved in a totem of a lizard god. The icon stood in the brush above the creek, and according to legend this divinity could assume nine hundred forms. You’d think it had one to drive off the locusts, the Kalashnikovs. But what could any god do about a machete? A colorless swag of metal, a bottom line of a weapon, the blade hung from the fist of the largest yo­kel trooper. As he made some prideful adjustment in his mufti, his eyes already enflamed with khat, his machete zigzagged before the faces of two or three squatters who hadn’t ducked into the scrub. Could they have expected these “Police?” Given up the location?

Anyway Ti’aba blocked his view, hustling cra­blike between him and the threat, stuffed the younger boy’s pockets with all but one of their hand-me-down valuables. You know, he whispered. Where you belong, you know. You belong upstream and then north, north. The older sent the younger ducking toward the creek, hustling him along with continued whispers: You know. Down here is the last place we should be. North, north, up in Naples, that’s where we belong. New family and a whole new world. In Risto’s last glance backward, Tiaba held the watch out stiffarm, where it was sure to be seen. It glittered across one open hand, white-faced, its digits cathedralesque. He was always the slender, showy one. He’d inherited the walk, the bones of their mother, and now he flaunted a gift from the father. He might’ve struck a pose, something camp, limp-wristed.

Risto, not yet Risto, turtling away, away, clawing as much as swimming, had been left forever since with whispers, those names. The brand of the watch, the unknown up North, the chameleon totem and the God of Isaiah.

The Color Inside a Melon releases June 11th, 2019 from Dzanc Books. 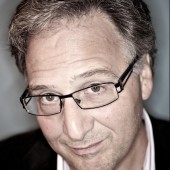 The Color Inside a Melon, appearing this month, will be John Domini's fourth novel. With blurbs from Salman Rushdie and Marlon James, the book is set in Naples, Italy, and completes a loose trilogy. Domini also has three books of stories, the latest MOVIEOLA!, which J.C. Hallman, in The Millions, called "a new shriek for a new century.” His fiction has appeared in Paris Review, non-fiction in The New York Times, and grants include an NEA.