An Excerpt from The Sarah Book So Sarah saw it all. She saw an old man with an empty two liter bottle of soda stuck around his penis. The penis was all swollen up inside the two liter bottle and it looked like a prize winning zuchinni squash. The old man wouldn’t go to the hospital for two days because he was so embarrassed. And so now his penis was purple and black. His wife came in with him and she kept saying: “He’s too lazy to get up and go to the bathroom at night so he uses the bottle sometimes. The other morning he woke up and the bottle was stuck on him.” But then she said, “Sometimes he gets so lonely I don’t know how to help him.” It took over two hours to get the bottle cut off. And after they did—it was too late to save the penis. The penile tissue had died from a lack of blood and so they had to amputate the penis and insert a catheter.

And then one time Sarah saw a woman pull out three NG tubes in a row. The NG tubes are these tubes you put through the nose and then down into the stomach so a patient can be fed. Even though the woman was in arm restraints she got her foot wrapped around the tube and then ripped it out. She did this once and they put it back in. Then she ripped it out again. They didn’t know how she was doing it until the third time when Sarah caught the woman with the tube wrapped around her toes. The woman’s nose was bleeding now and there was stomach bile on her chin. Sarah said it looked like a tear hanging on the woman’s chin. It looked like she had been crying, but it wasn’t a tear. It was stomach bile. It was like she was crying stomach
bile tears now.

And then one night they brought in this stripper girl who was all fucked up. Sarah walked around to hand one of the other nurses something and the girl kept staring at her. Then the girl reached out and tried to grab Sarah’s hand but Sarah moved it away. The stripper girl blew her a slutty kiss. Missy said, “Now sweetie—you’re probably just wasting your time. I don’t think you’re her type honey.” But the stripper girl kept moaning and grinding her ass into the bed like she was giving a lap dance for Sarah. She kept saying, “You like my pussy? You like it?” Sarah tried not paying attention to her though.

Sarah walked to the other side of the bed and just pretended the stripper wasn’t trying to seduce her. Sarah tried keeping her eyes from making contact as much as possible, but the other nurses were giving her hell. “Hey Sarah, I think she likes you. I hope you’re attracted to bleached buttholes.” Sarah looked down and the stripper girl was staring at her with a sexy stare.

At least the stripper girl wasn’t the fat bastard. The fat bastard was this 400 pound guy with long stringy hair who they always brought in for drug overdoses. He had a colostomy bag too, but that wasn’t the worst thing about him. The fat bastard liked nurses. When Sarah went into his room he was always accidentally letting his hospital gown pull up over his legs so that he was exposing a chubby little uncircumcised penis. “Sir you better pull your gown back down.” The fat bastard looked up with a half smile and said, “Oh gracious” like he was embarrassed except he didn’t pull the gown back down but kept talking. He said, “You know when I was in the army they gave you salt peter to keep you from getting an erection. It gets lonely in basic training if you know what I mean. I drank two gallons of water one night with enough salt peter in it to keep the whole army flaccid for months. But guess what?” He paused. “I could still do it.” Then he gave her a sexy look and whispered: “I could still get hard,” except he drew out the word hard. He said, “I could still get haaaaaarrrrrrrrrddddddddd.”

A few minutes later Sarah came back into the room and gave him his meds. Something else was going on now. “Oh God,” Sarah said and almost dropped the med tray.

The fat bastard just smiled and kept tugging away.

Of course, he didn’t know they were calling him the mad masturbator behind his back and he wouldn’t care anyway. The next time he was jerking off in front of Sarah he decided to give her some words of wisdom. “I don’t know why you’re so uptight. I mean you’re a woman. I’m a man.” Then he winked. Sarah finally lost it. She shouted, “Seriously sir. Do you think that’s attractive? Let’s forget you’re a man and I’m a woman. I can smell your shit bag sir.” The mad masturbator told her it wasn’t his fault he had a colostomy bag. It wasn’t a “shit bag.” It was called a colostomy bag and she should know this since she’d been to nursing school. She had been to nursing school. Right? Then he told her it wasn’t his fault. The nurse didn’t put in his colostomy perfume during the last shift when she changed the shit bag.

So later that night Sarah sat down on a bench outside the hospital and she lit a cigarette. She wasn’t supposed to smoke on hospital grounds but she did anyway. Oh but how can I tell you how fucking cool Sarah looked when she smoked cigarettes. “Ex wife,” he said. Sarah thought he was probably lying or else the girl was nasty.

Sarah said, “Where did you meet her?”

The mad masturbator said, “I met her down in psych the last time I was there.” Sarah knew what this meant. People put in psych only like to do one thing while they’re there.

About that time here came the mad masturbator’s girlfriend–except she wasn’t as Sarah imagined her. She wasn’t the nasty ass Sarah imagined and she wasn’t just a made-up story. She was somebody’s beautiful daughter. It was the stripper girl. But she looked like a different person now. She looked like her life was together again. She gave the mad masturbator a big kiss and held him a loooooooonnnggg time. Sarah thought, What the hell?

So Sarah decided to test this love. She knew she shouldn’t but she did. She said, “Well sir I think you should ask your guest to leave because it’s time for me to change your colostomy bag.” The mad masturbator just looked at her surprised like how could you do that? But instead of being shocked or appalled or turned off by a shit bag the stripper girl stroked his greasy hair and said, “Oh I’ll do it for you honey.”

The mad masturbator didn’t say anything for a second but then he looked up and said, “You’d do that for me.”

The stripper girl nodded her head and smiled and her eyes shined bright like a woman in love. 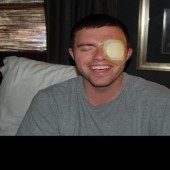 Scott McClanahan is the author of Stories, Stories II (Six Gallery Press), Stories V! (Holler Presents), The Complete Works of Scott McClanahan Vol. 1 (Lazy Fascist Press) and Crapalachia: A Biography of Place (Two Dollar Radio). His forthcoming novel, Hill William, is coming soon from Tyrant Books. He lives in West Virginia, where he is co-founder of Holler Presents, and would love to eat chicken wings with you.