An Open Letter to the Man Who Stole My Father’s Hash Brown in a McDonald’s in Panama, It was you. You know you did it. You’re not in the picture of the inactive volcano El Valle that we spiraled down into as our car clung to the cliff side, and you’re not in that picture of me dressed up in all yellow like a redheaded banana, sitting on cannonballs at a dusty fort, but you’re just as memorable. You’re imbued on that trip like heat on a summer day.

You did something that was – to my seven-year-old self – completely out-of-this-world. You walked into our fine American dining establishment, the McDonald’s, and held out your hand.

You scared me at first because you were like a robot or zombie: tall, rigid, dull-eyed, open-palmed and without my language. My father asked you to go away but your robot feet only chiseled deeper into the ground. Bewildered, my father began reaching for his wallet to give you a couple dollars, but – in a flash – you snatched up his hash brown in its thin paper envelope and hightailed it out the door.

Madness! My father, surprised and in the moment, stood up and actually yelled, “Stop that man!”

This is why you’re in my memories. You were the unstoppable hash brown thief of Panama City, Panama.

Of that simmering summer trip I only remember vague, watercolor panoramas of fortresses on hilltops and black-eyed mono titi monkeys with tiny, dark hands reaching out for fruit, fruit we readily gave, but you I remember clear-cut. You were only present for a few moments yet you made such a profound impression in your simple stage directions of saunter in, open your hand, snatch hash brown, whizz out the door.

My brother and I giggled for days at my dad’s melodramatic reaction: “Stop that man!” As though he was in a film noir, as though you had robbed a bank. We discussed the worth of a hash brown, had you actually been stopped and the hash brown was returned to our table, cooled and slightly crushed.

We sobered up towards the end of the trip, thinking about how you wanted the hash brown more than the dollars. Maybe you thought my kind, archaeologist father was reaching for a gun and not his wallet – that Micky D’s was something Americans find worth fighting for, armed with handguns and hamburgers. Maybe you were just that hungry.

You were my first culture shock. You were a beam of something new in the red-and-yellow familiar shell of McDonald’s. My Spanish vocabulary only consisted of essentials like “hamburguesas” and “papas fritas.” I couldn’t define you yet, but you got me thinking.

I’m sorry I got this big, new concept of the world and you only got that hash brown. 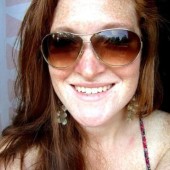 Hally Joseph is a freelance writer based in Atlanta, Georgia. She is currently pursuing an MFA in writing at Savannah College of Art and Design.