And One Fine Morning On the first night of spring or thereabouts, looking out of my dining room window, I noticed a full moon rising in the east, lighting my yard and making it appear much lovelier than it had seemed that day. This year has been cold, one of the coldest according to the Chicago Tribune.

I went outside and stood on the small deck on the south side of my house. I went out to take a pee, something I do, I’ve decided, to establish ownership of my land or, at least, to show that I have enough land to do so without raising a fuss with my neighbor who lives behind me and is, after all, the mayor.

Standing there I saw the moon’s light illuminating the pale green grass that was just starting to grow. Looking across my yard I saw how it brightened the white buds of a plum tree that had just begun to bloom. Seeing these things and aware of the moon still rising over my left shoulder, I was struck with the most intense sense of wonder.

Fitzgerald captured my feeling of wonder at the beauty of the natural world at the end of The Great Gatsby. You remember the passage don’t you? He is imagining how this place must have looked to the first Dutch sailors who saw our continent “—a fresh, green breast of the new world,” which must have given each of them “an aesthetic contemplation he neither understood nor desired, face to face… with something commensurate to his capacity for wonder.”

I’m getting old. That surely has a lot to do with my reaction, but the next thing I felt is what I want to write about. I’m no scientist, and a biologist or an anthropologist or an experimental psychologist or a paleontologist might take me on for my next observation. But here it is: We late arriving humans are the only creatures who can feel a sense of wonder. Other animals can’t. If they notice a full moon or it lightening the dark earth, their behavior is determined by their genes, which they have no control over.

Earlier that day I had watched two male robins fighting together under the Norway pine just off my deck, trying to attract and hold the attention of a single drab female that was on the ground a few feet away. I thought their behavior was exciting and beautiful, but they were just doing what their genes made them do to reproduce.  Also that day, I watched a tree sparrow on the deck rail where I later stood to take my pee puffing up its neck feathers to look like a pearl necklace which made it seem twice its size. It too was hoping to attract a mate so it could reproduce.

Hundreds or maybe thousands of National Geographic films have shown me that this kind of behavior comes from primitive life forces that are entirely instinctual. Sometimes, as the robins and the tree sparrow did, they show an almost fierce desire to recreate themselves; sometimes other animals form packs for self-protection or, at best, to protect their young from predation and sometimes, as countless specials have shown, they seem to show a sense of affection or maybe even what we call love, but none of these behaviors are anything like our singular ability to feel a sense of wonder.

The implications of what we alone understand about the natural world were shown in a more multifaceted way in another television program I’ve been watching called, “Australia: First Four Billion Years.”

Life began on this planet around four billion years ago. Human life, “hominin types” we’re called, about seven million years ago, and Homo sapiens (that’s us) about three hundred and fifty thousand years ago. No one yet knows the whys or anything really close to the exact whens–“give or take a billion years or so” or “maybe it was 370 million years, not 350 million,” a scientist might say.

I know it is not politically correct to say this next thing, but can there ever be a way science and religion can truly reconcile? Is there any reason why Christians or other religious believers shouldn’t find the scientist’s work discovering the origins of life and human intelligent life alarming and frightening? The Old Testament’s thirteen hundred year old earth is a lot easier to visualize than a four billion year old one. And what is there to say about all the death.  Heaven’s a lot more credible with the thirteen hundred year old model than a four billion year model. And how many countable generations was it in the Old Testament that went back to the creation?  A finite number, right? Try that on a three hundred and fifty million year old model.

Recognizing that life is billions of years old and that the life of our species is hundreds of millions of years old makes me view both life and death differently than I once did.  We are the only creatures who understand their meaning; we are the only creatures that understand the purpose of and necessity for both. We are the only creatures who recognize that we will only live for a flicker of time in the life of our planet now that scientists have begun to reveal to us the real story of life on earth. Is there any wonder then that in the Garden of Eden story, a serpent gave knowledge to us and it was considered a curse?

On the other side, because of our knowledge only we humans, who have spent and will spend such precious little bits of time on this earth, have been able to feel the wonder of it all and appreciate the value of the little time we have to enjoy it. Because only we know we are going to die. That’s the curse that makes us different from all the billions of species that have come and gone on this planet or share it with us today. Ninety nine point nine percent of life on our planet, scientists tell us, is now extinct.

Enough of this you say. You’re depressing the hell out of me…

I know it. We don’t want to look at death in this way. We’ve invented heaven and other forms of afterlife. We talk about rebirth and reincarnation. We talk about the cycle of life to help us stop thinking about the reality of our- oh so short- lifetimes.

Andrew Marvell got to the crux of the matter in “To His Coy Mistress,” presenting a theme that we now call carpe diem as well as it has ever been done. Live for today, the poem argues, for tomorrow we may die. The first lines read: “Had we but world enough and time, / This coyness, lady, were [would be] no crime.” He imagines loving and wooing her for as long as there has been human life itself, but then, referring to her unwillingness to love him in return, he says “But at my back I always hear / Time’s winged chariot hurrying near.” Death will turn his lust into ashes because, “The grave’s a fine and private place, / But none I think do there embrace.”

With this curse of knowledge, unavoidable and undeniable, what are we to do? Plod on, I guess, and live for today, each day, without ignoring the realities that science shows us.

Even more humbling is the reality that we’ve only known about the universe itself for a flicker of time. Could a god have created all of this billions and billions of years ago?  Remember Carl Sagan’s famous, “There are a billion stars in the Milky Way galaxy and a billion galaxies.” And Sagan we know, since we now have telescopes in space, was far off the actual numbers, maybe hundreds of billions of times off!

Yes, plod on, live for today, accept the fact that, curse or not, we know these things; yet appreciate that we alone can feel the sense of wonder I felt standing on my deck, taking a pee into my own back yard, recognizing that only we humans can have, my own, our own, distinct place in our universe.

Yes, it is our universe, isn’t it? It belongs to us, doesn’t it, because we alone can comprehend its beauty and its vastness? But damn its vastness, and damn the possibility of other life forms on distant planets that might share with us the sense of wonder our knowledge has given us. Say we discover someday that we are not alone; that other life forms exist outside of our solar system. What difference can that ever really make in the split second of time of our existence? That split second of time we all have to relish our own uniqueness which we, like the robin and the sparrow, must also pass on to those who will follow us. It is a gift and it is a curse only to us, yet  to return to the end of Gatsby, “…but that’s no matter—tomorrow we will run faster, stretch out our arms farther…” and then reacting to Gatsby’s death or maybe his own or maybe all of our deaths, Fitzgerald concludes “… And one fine morning–

“So we beat on, boats against the current, borne back ceaselessly into the past.” 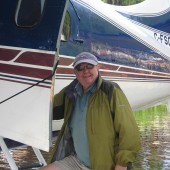 Charles Kerlin is a teacher of creative writing and American literature at Saint Joseph’s College in Rensselaer, Indiana with a Ph.D. from the University of Colorado. He was a graduate student for two summers at the Iowa Writers’ Workshop. He has published a half dozen stories and won the Hopewell prize for a short story judged by Alan Cheusse, book editor for NPR.