Anything with Wings (Part 2)

“Shut your smart mouths,” the woman says, but it’s a lot like when Mindy says the ‘f’-word; not much behind it.

“I don’t watch much TV, with working,” I say. Part of me hoped to sound critical, but for some reason I end up feeling defensive instead. When no one’s impressed I add, “But my daughter does.”

“I never seen no daughter,” the woman says. The wind catches the edge of her sleeveless shirt which looks like it once belonged to a man.

“She stays inside. The heat makes her sick sometimes.”

“Heat?” the boy says. He’s younger and thinner than he looked from the window, and when he talks I can see a shining tooth. “This is cool and breezy.” His lips stretch wide when he says “breezy.”

The wind backs off so that it feels like we’re wrapped in a blanket of heat. The baby sits under picnic table 62, his big eyes looking up at me. When I smile, he plants his little palms in the dirt and begins to crawl.

“We’re from Louisiana,” the woman says. “We used to have a real nice house.”

“Two houses,” the girl with glasses says, still not looking.

“That’s right. We were together when it hit and we’ve been together ever since.”

I know I should ask her to continue, let her tell me all their troubles but I’m so full of troubles I’m bursting and can’t let any more in. “So you were on TV?” I say instead. I notice our kitchen curtain moving, but I’m not sure if it’s Mindy looking out or Surfer Dude.

“People tell me I was. I haven’t seen TV since we left the motel.”

“Does your daughter watch Days of Our Lives?” the girl with lilac eye shadow asks me.

I’m pretty sure it’s Mindy’s hair I see in the window, but it’s so dark inside it’s hard to tell. “I’m not sure,” I say.

“I wonder what happened to Sami.” The girl studies her fingernails again. “I used to watch every day before work.”

“I know it was me because they said they saw my yellow blouse,” the woman says. “I’ve still got it, but I’ll never wear that blouse again.”

The baby works his way to his feet like he’s preparing for a walk. The boy makes clicking sounds through his teeth.

“You mean somebody interviewed you?” I ask.

“God, no. No one came close. I was on my roof, me and the kids. The Parsleys, too.” The woman’s eyes are a muddy yellow, and her big arms reach out to me like I can help. “There were helicopters flying over and someone said they saw me on TV waving my arms and yelling. I don’t usually yell.”

Mindy’s face is clearly in the window now, looking out, watching.

The woman’s arms begin moving in a circular rhythm above her head. She’s gazing up at the flat sky above Seascape Motorhome Park like God lives up there. “Four days,” she says, her yellow eyes brimming with tears, her body rocking. “We were on that roof four days.” After a while the woman’s hands close up like wilted flowers and settle on her face.

The girl rolls her eyes behind the pink glasses but doesn’t make a sound.

“I hope they took my picture on day one or two. After that was ugly.”

“Ask her,” the girl with lilac eye shadow says. “Ask her if she knows what happened to Sami.” She chews at the side of her finger.

I look at the closed door of #61. It’s down to raw wood near the jamb where Surfer Dude tries to get in. It’s the same raw wood on the inside of the door, too.

“Wait,” I say. The rotten steps to the rotten porch crackle under my shoes. My chest feels like I’ve traveled a thousand miles by the time I step inside the trailer. Mindy’s standing in the cold light of the open refrigerator. “Why don’t you come outside?” I say. She doesn’t answer, doesn’t look my way. “The girls want to know if you watch Days of Our Lives.” Nothing. “The boy, too.”

Mindy closes the refrigerator door, but there’s a pause, an automatic resistance to anything I say. Suddenly she pushes past me and out the scratched-up door. I hurry behind her before Surfer Dude bolts. By the time I make it back to The Crowd, Mindy’s sitting on the short end of picnic table #62 like it’s her daily routine. Her feet kick playfully near where the baby plays in the dirt. The boy stares at her. One hand comes out of his pocket and scratches at the stubble on his chin.

“Do you watch Days?” the lilac-eyed girl asks around her finger and teeth.

“Sometimes.” Mindy’s voice is different than the one she uses with me, but not much.

“Did they ever find out about Sami?”

I sit on the rotting boards beside the woman with the star shorts. “I was praying like crazy,” the woman says like I’ve never left. My eyes are on Mindy. “Praying for anything with wings.”

The baby’s managed to find his way out from under the table. He holds onto the corner of the bench beside Mindy’s paddling feet and balances on his twig legs.

“Nothing. Not even God’s little whisper.” The woman’s voice deepens. “Finally, after we gave it all up, the helicopter came.”

There’s a sudden rustling sound, and everyone stops to watch a ragged squirrel scamper across the picnic table behind Mindy. She freezes up before letting out a squeal. “He’s back,” the boy with the shining tooth says sing-song. He smiles at Mindy like he’s given her a present.

An assortment of insistent, metallic twangs precedes Surfer Dude’s arrival, who bursts through our open kitchen window like water from a clogged hose. I see him in slow motion, riding the screen like he’s caught himself a wave. “Dude!” Mindy yells. The cat takes off, or rather, tries to take off with the screen attached to a back claw. He heads in the direction of the squirrel and under table 62, dragging his new appendage with him. “Stop!” Mindy hops down from the table, but before she lands she kicks the baby’s head.

It seems impossible, but the big-eyed boy’s eyes get even bigger. “Oh no, I’m sorry, I’m so sorry,” Mindy says, reaching for the baby. The older boy rushes over and clamps him under the arms. No longer wobbling, the baby takes note of things and screams.

But the scream gets carried away by a wind to beat all winds. It blows along the strip of land between 61 and 62 like there’s something huge behind it, banging the open door, whipping at the tree, stirring up papers and dirt and sticks. The garbage cans rattle their chains and even the picnic tables shift. Everybody squints and hangs on; the boy uses his long fingers to cover the baby’s eyes.

We all jump when what looks like a tumbling tumbleweed bangs off the corner of a trailer across the lane and does an awkward pirouette. The dried-up thing tosses along the busted-up macadam toward us. Turns out it’s not tropical tumbleweed after all but a scrawny tree with a jagged trunk. Not much more than an overgrown stick. I’ve got just enough time to wonder what poor fool in Seascape Motorhome Park got stuck with that pathetic excuse for life before everyone scrambles. “Down!” someone yells – I think it’s Mindy – and in a flash we’re huddled between the tables, arms banded across each other’s backs.

Clumps of dirt and debris batter us. The group shifts until the baby’s protected, surrounded by our connected selves. The baby’s mouth contorts, pleading, before he gives up and sucks his dirty thumb. The air’s turned hard around us, but within our little nest we manage to breathe. I notice Mindy’s lips moving and try to make out what she’s saying, but the wind’s too much.

I lift my head to take a peek in time to see the tree flipping over our heads, so close that something sharp and prickly catches me above the eye.

And then it’s over. Not even a breeze. The blanket of heat’s back on.

We stay huddled for a minute like we’ve turned to stone, like the world will find us if we stir.

We pull ourselves apart and as we do Denton picks up the baby, who wails and kicks. Big drops cling to his eyelashes. “Another lump,” Denton says, rubbing at the spot where Mindy kicked him. Denton tucks his arm around the baby’s soft skin.

“That sucked,” Mindy says, flipping her hair away from her eyes. She laughs until the other girls laugh, too. The girl with glasses takes them off and wipes them on her shirt. Mindy studies the baby. “Ooooh, I’m so sorry,” she says, resting her orange fingers on his head.

“My, my, another lump,” the woman with star shorts says. She places her face so close to the baby’s face she could kiss him. “That was windy like the big bird, right Sean? Like the big bird that saved us.”

The baby rests his hand on the woman’s cheek. “Bird?” he says, as if he remembers.

“He didn’t want to get in that bucket,” Denton says.

“She wouldn’t let anyone else take Sean,” the girl says, glancing at the woman without using her glasses. “Not even Denton.”

“I cried and cried, but we made it up into that helicopter first. I didn’t want to leave anyone behind.” The woman’s eyes lock onto my face. “Looks like you got nicked,” she says to me, laying a heavy hand on my hair and rubbing my forehead with her thumb.

“It’s nothing,” I say, trying to back away, wanting my own hand to do the soothing, but her thumb won’t allow it. Her skin feels calloused, or maybe it’s dirt giving way.

Mindy looks like she’s going to say something to me, but then Surfer Dude peeks out from under the skirting on 62. He fights his way out with the screen still attached to his paw. “Stupid cat,” she says, approaching him gingerly like he’s wild.

The girl with lilac eye shadow sits on the picnic table and nibbles at her thumb. “So did Sami get caught?” she asks.

“Of course.” Mindy detaches the screen and hugs a wiggling Surfer Dude to her chest. “But she got away with it, too.” There’s a hint of struggle in her voice.

The woman takes her hand away from my head and dusts it on her star shorts. She boosts herself onto the picnic table with a sigh. “The Lord answered my prayers, ma’am. I was scared, but I held onto that basket and it lifted us…” The woman’s arms stay at her sides this time, but I swear the air around her rises. “…up under those howling, frightful, twirling wings.”

“I’ve never been to Disney World,” Mindy says. Surfer Dude has settled down and rubs the wrinkle of his absent eye against my daughter’s chin. “I’ve always wanted to go to Disney World.”

“Maybe someday,” I say, wanting it badly, a little bird struggling in the wind. 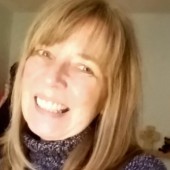 Sharon A. Pruchnik’s work has appeared in The Feathertale Review, and her stories have won recognition from various organizations such as the Westmoreland Arts and Heritage Festival and The Writer’s Center of Indiana. She lives the small-town life in southwestern Pennsylvania where, when not writing, she can be found feeling guilty about not writing.