The apatosaurus looks over at her lover as the ashcloud descends. Somehow, she knows that his bones will be uncovered, and hers will not. Their faces are near but their bodies sprawl out in opposite directions. She envisions the way he will be found by future creatures: small tools in their hands, even though she doesn’t have the words for chisel or brush or hand. She sees him in transit, moving across whole landscapes, great bodies of water. Bones crying out motes of dust all the while. He will be proud-tall, tethered together and propped up with something stronger than cartilage, something that can withstand the epochs. There is a museum that gets tangled on her tongue. She doesn’t yet know the word for paleontologist or child but knows they will someday stare up at his bones in wonder. In his future, she sees a piece of metal near his bones that will give him a name: apatosaurus. And some words: “It is still not known by scientists how the apatosaurus managed to pump enough blood to their brains, or how they managed to breathe, considering how large they were.” She whispers this name to him—apatosaurus—again and again as the ashcloud envelops. This is how she makes his future come to pass. She wants to touch him but her bones are already turning into stones, and he blinks once, slow, like he is struggling to swallow her image for a long safekeeping. 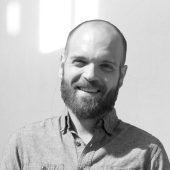 Joel Hans is an MFA candidate in fiction at the University of Arizona in Tucson, and the managing editor of Fairy Tale Review. His fiction has been published or is forthcoming in Caketrain, West Branch, Redivider, Booth, Necessary Fiction, and others. He is also a co-editor of Cartridge Lit, an online literary magazine devoted to literature inspired by video games.