My beloved husband says, no poems

about poems, declaring them as useful

as rhubarb, which was a plot device

in a horrendous made-for-TV movie we watched

instead of writing poems about poetry, which,

I argue, can be fruitful and necessary,

unlike this movie which would have viewers believe

the sweater-wearing professor next door

is actually a sick psychopath with a hidden

bunker of kidnapped women beneath

his suburban ranch-style house. This plot,

I assert, is far less plausible than your

imagery. In this movie, which we watch

aghast at its Mack-truck-sized plot holes,

forces her to swap her Portlandia threads

for the crinolines and lipstick of a 1950s

sitcom housewife. They carve a lot

of roasts in his hidden bunker,

which is protected by a security system

no untenured essay-grader could afford.

Anyone can afford an ars poetica though,

I maintain–a few lines, a turn of phrase

or two, some shuddery slither of insight

for an ending. By the time this movie

is done, there are multiple dead bodies,

the rhubarb has become pie, the prof’s

languishing in prison, and the hunky

dude’s fiancé has penned a tell-all

about her ordeal. It will be seen by more people

than will ever read this poem. But I declare

this poem has reason to exist, if only

to warn you of the time-suck of Lifetime movies.

I should be happy the psycho prof

and I don’t need a stint in some knife-wielding

anti-Modernist’s basement to ward off all

the darkness above, all the pastel chaos. 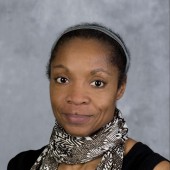 Allison Joseph lives, writes, and teaches in Carbondale, Illinois, where she is part of the creative writing faculty at Southern Illinois University. She serves as editor and poetry editor of Crab Orchard Review, moderator of the Creative Writers Opportunities List, and director of the Young Writers Workshop, a summer writers workshop for teen writers. Her books and chapbooks include What Keeps Us Here (Ampersand Press), Soul Train (Carnegie Mellon University Press), In Every Seam (University of Pittsburgh), Wordly Pleasures (Word Tech), Imitation of Life (Carnegie Mellon UP), Voice: Poems (Mayapple Press), My Father's Kites (Steel Toe Books), Trace Particles (Backbone Press), Little Epiphanies (Imaginary Friend Press), and Multitudes (forthcoming, Word Tech Communications). Her awards include fellowships from the Illinois Arts Council, the Bread Loaf and Sewanee Writers Conferences, the John C. Zacharis First Book Award from Emerson College and Ploughshares, the 2009 Aquarius Press Legacy Award, the 2012 George Garrett Award for Outstanding Community Service in Literature from the Association of Writers and Writing Programs, the 2014 Paladin Award from RHINO for "extraordinary longtime contribution to poetry in Illinois," and an honorary doctorate from Kenyon College in 2014.