We wake up the morning after a game with scratches from needle bushes and other aches and pains. The good hiding spots are the uncomfortable ones because a seeker won’t try to tag anyone beneath the knives of a mini pine tree. But this summer, the boys are the most likely culprits. I’ve been finding bruises in the mornings, sometimes even welts, long red lines from the snap of a towel against my arms and legs. Steph and I compare wounds and discuss which boy made which mark. Steph likes to reenact the poses she is put in, like when she was forced to kneel in front of James while he smacked her shoulders with a baseball mitt.

“When I went for the hut, he tripped me and then did this,” she says, holding out her wrist covered in little red marks caused by his nails digging into her. “Tonight we’ll get revenge.”

The boys run to hide while we count backwards from 100, sitting on the swings near home base. We pump our legs and glide back and forth past each other, leaning back and looking up at the darkening sky. After counting, Steph leaps off her swing first, not afraid of being airborne, and runs out the gate of her yard and down the street. She is in pursuit of James and I, bringing my swing to a slow stop, am going to look for Shawn.

Every summer night we play hide and seek, and now that we are in middle school, our parents call us home later. The neighborhood is a safe place, a cul-de-sac where two short streets meet at a circle, and a dead end stops cars from passing through. At sunset we gather on my front lawn since it’s the middle house on the street. The younger kids gather, too. We play boys versus girls even though there are more girls than boys and once a member of each team reaches the hut, they are safe.

The hut is the centerpiece of Steph’s swing set. Unlike the rest of the ones on the block with two or three swings and a slide, hers also has a balance beam and this wooden triangular house held up by four wooden poles that we call the hut. When Steph and I were small, we treated it like our own private tree house. Now it has decayed to the point where we won’t go inside it—too many splinters poke out from the wood and it’s a frequent home for bees and wasps—but to win at our games of hide and seek, we have to touch the inside of the hut and yell “Olly olly oxen free.”

The game changes as the sun goes down and one by one the smaller kids are called home. Then it is just the four of us like it is now. I can hear Steph’s feet running down the street as I creep along the side of her house, passing the empty cage where her pet rabbit used to live. There is long grass climbing up around it and probably ticks in the grass. I won’t go near it, and instead I check the shed filled with bikes and rakes. Shawn probably wouldn’t hide here with all the clutter to trip over. I would have heard him from the swings.

Shawn only moved into our neighborhood a few months ago, but he is already embedded in our games. He fell into our routine quickly and he and James make a united front against Steph and me. It’s different having another boy our age on the block. He doesn’t treat me like the other kids treat me. James and I have been neighbors since we were three years old and he teases me like a sister. He likes to remind everyone how I used to cry if nobody held my hand when I crossed the street, a silly notion on a dead end. Shawn doesn’t know these things about me.

In Steph’s front yard, I walk down one side of the U-shaped driveway and look in the small cluster of trees to the right of the house. Then I check the rock garden next to the driveway and underneath the family van. Seeing nothing, I cross the street to the Fieldings’ house. Below their darkened windows are manicured bushes and a row of red, white and blue flowers. We don’t usually hide near their house because of their two Doberman Pinschers who bark at the slightest sound, but since they are out of town I run over their lawn to the driveway and check behind the bushes. Next I cross the street again, this time diagonally, to look in my own front yard.

Steph and James are chasing each other in the middle of the street. James runs one way and when Steph starts to chase him, he spins on his heels and runs toward the woods behind the Dead End sign. We aren’t allowed in the woods at night because our mothers say there is an apartment complex on the other side where bad kids drink and smoke. James is backing into the woods to taunt Steph and hide where she can’t catch him, and I run past her to check the Martins’ house with its backyard gate left wide open. Their built-in swimming pool glows within the low chain fence surrounding it and a yellow towel is crumpled on the ground next to one of the lounge chairs but there is nobody in sight.

I don’t find Shawn until I’m back in Steph’s front yard looking past the plants with long green leaves and yellow stripes down the middle. In the rock garden, there is a puddle of darkness—black jeans, white shoelaces, his leg—stretched out amongst the pebbles and I drop flat to my stomach to avoid being seen. I crawl on my knees and then I’m up on my feet, quietly at first, bare feet sliding through the wet grass. Once my feet hit the driveway, he can hear me coming, but it is already too late. I leap as he is getting up and hit him head-on and he falls backwards with me on top, straddling him.

I don’t move right away. My face stays close to his and I smell the mint of his gum and the manliness of his deodorant.

I pull myself off him, embarrassed, and when I stand up I see he holds a long branch in one hand. A weapon. Without thinking, I turn and run toward the gate of the backyard, and once through it, toward the hut. He catches up and grabs me. His arm pulls me back into his chest and he turns me around, slamming me into the hut’s frame. With one hand pressing against my shoulder, he pins me into place, and snaps the branch in half to make it more manageable. He begins to poke at my belly, pushing the sharp wood into my skin. I close my eyes and pretend it hurts. He isn’t using it as hard as he could be, and when I peek from under my eyelids, I see the glistening sweat on his forehead and the longish blond hairs sticking against it. He is tall for his age and his chest is wide.

He scratches me with the branch, moving it across my stomach. He is forming circles and lines. Letters.

“What are you writing?” I ask.

The scratching tickles and then becomes more painful when we hear footsteps coming toward us. James walks up alone.

“She’ll find her way back,” he says, smirking, and moves closer to watch Shawn’s torture technique.

Shawn presses the branch harder and it nearly pierces my skin. When I try to pull away, he grabs my hair and pulls me back, and as I pull away again, James comes toward me with his baseball cap, twirling it around his finger and then whipping it across my face.

I cry out in pain at the same time a voice rings out from down the street. Mrs. Krowski, James’s mother, is yelling for him to come home.

We hush and stand still.

I squint out of my sore eye and a tear comes out. Then another. Shawn loosens his grip on me and I reach up to test the tenderness of my eye where the dry fabric of the rim hit. My shirt rides up and as I reach to pull it down, Shawn’s hand also reaches down. His palm touches the bare skin of my waist where the shirt separates from the shorts. His other hand, the one that was pulling my hair a moment ago, is combing out the mess he made of it, taking the long strands and moving his hand over and through them, letting them slip through his fingertips. He is done hurting me.

James creeps away to where Steph is crouching at the gate of the yard. She looks like she is preparing to attack. I should escape now and run to her side. We could show our strength. 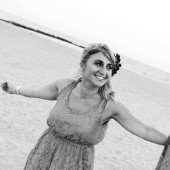 Melissa Skepko is a writer and educational publishing professional in the Boston area. She is on the staff of The Drum, a literary magazine for your ears, and Novella-T, a weekly publisher of serialized fiction. Find her on twitter @melskepko. This is her first published story.