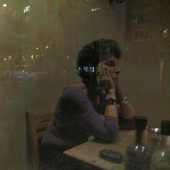 Laurie Stone is author of three books of fiction and nonfiction. A longtime writer for the Village Voice, she has been theater critic for The Nation and critic-at-large on Fresh Air. She has received numerous grants including two from the New York Foundation for the Arts, and she has been awarded the Nona Balakian prize in excellence in criticism from the National Book Critics Circle. She has published numerous memoir essays and stories in such publications as Open City, Anderbo, Nanofiction, The Los Angeles Review, New Letters, Ms., TriQuarterly, Threepenny Review, Memorious, Creative Nonfiction, St Petersburg Review, and Four Way Review. She has served as writer-in-residence at Pratt Institute, Old Dominion University, Thurber House, the Kimmel Harding Nelson Center for the Arts, and Muhlenberg College. She has taught at the Paris Writers Workshop and the Summer Literary Seminars in St. Petersburg, Russia. In 2005, she participated in "Novel: An Installation," writing a book and living in a house designed by architects Salazar/Davis in Flux Factory's gallery space. She is currently at work on My Life as an Animal, a Memoir in Stories and The Love of Strangers, Flash, and Short Fiction by Laurie Stone. Her website is lstonehere.wordpress.com.

Outside the barn, moonlight bounced off April’s wedding gown. She said, “Keep my cake for me.” I...