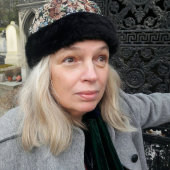 Leah Mueller is an independent writer from Tacoma, Washington. She is the author of one chapbook, “Queen of Dorksville” (Crisis Chronicles Press, 2012), and two full-length books, “Allergic to Everything” (Writing Knights Press, 2015) and “The Underside of the Snake” (Red Ferret Press, 2015). Leah was a winner in the 2012 Wergle Flomp Humor Poetry Contest, sponsored by Winning Writers. Her work has been published in Blunderbuss, Open Thought Vortex, Sadie Girl Press, Origins Journal, Talking Soup, Silver Birch Press, Cultured Vultures, and many other publications. She is a regular contributor to Quail Bell magazine, and was a featured poet at the 2015 New York Poetry Festival.