Auto-Drift, or A Devised Dérive – Part 4

That is to say…umm, bad, in a manner of speaking, so to speak. Not good if you think about it, really. In a sense, not a great situation. Not very good, especially when you look at it this way. Unfortunate, in a way. All I’m really trying to say is that, etc. etc. it’s kinda doubleplusungood.

In and around again. Yes.

Matt, urbanaut, autovoyeur, perambulated through downtown Ferguson, car wheels and steering wheel turnin’ ‘round and ‘round, and noticed a few bars and restaurants along the main street. However, few people were out on what he would assume would be a typically lively Saturday night. The absence of people out and about was eerie to him, and he continued on his way, leaving Ferguson for Normandy and Jennings, eventually finding North Broadway. Before that he passed by Lutheran High School North on Lucas and Hunt and looked far south to its counterpart.

But now, North Broadway, the edgelands, the northern path that leads east into the downtown city of St. Louis proved to be an old artery, abandoned of its red blood cells. The road and area were desolate of people and desolate of life. The place seemed to say, Go back, Jack. Factories stood as its guardians, its last chance at life.

And then, there it was…coming into the city, he saw it:

The Gateway to the West

How marvelous! And the pink Lumiere lights! And the Skeleton Bridge! And the billowing smokestacks…

Matt drove into the downtown of his city. Downtown, the city, urban: the antithesis of his suburban home, the wasteland, that entity that sprawled on the edge of the city in geometric Euclid order, no place fit for the dreamer or the misfit. Could he really call St. Louis his city though? Was any place his home? He was an outsider in all.

The city: the epitome of all that is culture; at least that’s what they’d have you believe. Things will be great when you’re. He stared out of his window at the various stadiums and kenning-characterized buildings, aka, skyscrapers.

He drove back a little, down the city’s market street, and found himself at his alma mater: Saint Louis University; a building located on one grand boulevard. I am now a student of life; or a student of Saint Louise University.

He pulled over to the side of the road where meter spots were available. The phallic clocktower on the campus donged that it was 9 pm at night.

My legs hurt, he thought.

Charley sat on a couch next to his Russian friend with a Budweiser in his hand, in the apartment of their mutual friend Kyle, who was a business student at SLU. The three of them were starting the night of drinking early.

—Where the fuck are Maurice and Valerie? Russ demanded of Kyle.

—What’s your rush, dude? Kyle responded. Maurice is only gonna agonize you about your fantasy team sucking this week.

—Don’t fucking renind me, Russ grinded his teeth. Fuck this! he said leaping off the couch, I’m taking a shot now. I’m getting fucked up tonight. Charley, you want one?

—Don’t you bitch out on me, Russ mocked Charley. We’re going hard tonight. Enough with this scissor fest.

Louise lounged in her armchair, lazily and sleepily watching one of her favorite movies. She lethargically gazed over at her large cup of tea sitting out of arm’s reach, sighed, and lefthanded stretched forth to sip a drink just as the hero of the film blasted his boomstick shell into an undead.

Matt zipped his fly and watched the toilet bowl water swirl round and down. He walked out into the Jimmy John’s restaurant proper. He thanked the patrons for allowing him the use of their facilities, despite the fact that he hadn’t purchased anything, and walked outside back to his car.

Earl lay on his boyfriend’s bed, laptop opened, and downloaded various parts of incredible New York City maps from 1947. He was enthralled by these maps and quickly posted them to his Facebook page to share with his friends; for them to delight in as well.

Russ downed the shot of vodka and grimaced a soured face.

Edwina sat with her mother at a Japanese grill named Kitaro Grill and Sushi Lounge, eating with relish steamed vegetables and dangling glazy noodles, as well as the inner organs of land animals and sea creatures. She enjoyed being on the customer side of the restaurant.

It was 50 degrees outside in St. Louis.

Matt was disappointed that he had missed the SLU protests: the rallys and situations near SLU’s International Building. He wanted to witness a little bit of history.

Following the drift, the car of Matt’s elliptically right angled south at the stadium and cruised down down into Soulard where he zoomed past the Social House club and the Mardi Gras parade route.

He found the brewery of the Busch brethren beer and continued on into the streets that share the names of the states: Ohio Avenue, Iowa Avenue, Utah Street, Oregon Place, and on and on.

He drove down the major interways and old trails of Gravois and Broadway, south straddling the might of Mississippi, as he witnessed the old industrial yards and rail yards.

He got lost in Carondelet but decided to take a different route than what he had originally planned. He saw the River City Casino neon lights.

Lemay Ferry lay deserted before him, and when he got to the end of South Lindbergh, he looked far north for any mystical glimpse of the old Jamestown Mall.

Night driving posed some advantages: less traffic, more solitude; but also offered some disadvantages: harder to see the roads wished to be taken. Matt zoomed up and down, and then down and up the various roads of Lemay, Tesson, Gravois, and Watson, eventually coming to Lutheran High School South. He looked north for its counterpart. He derivated through the outer edges of Grant’s Farm and Grant’s Trail, and he witnessed the bright full-bellied autumnal moon peeking through the tops of the trees at him.

Crestwood Plaza, another casualty of the political economy, lay silent and deserted, the older dead brother to the old Jamestown Mall.

He passed by one of the oldest living McDonald’s, skirted the closed perimeter of Laumeier Sculpture Park, and road to Powder Valley and along the lone Cragwold Drive bridge over highway 270 for the first time in his life.

Eventually going under 270, along Marshall Road (back where he had begun) again, he was almost finished. However, he chose instead to see more of the night sights and now used the stars as his maps: Arriving at the southern point of Telegraph, he found a hill and gazed out into Arnold and the lights below.

He drove by Oakville High School, where he had taught for a while, and then took highway 270, the interzone, one of the many unlivable spaces society had built, back home, arcing, majorly and minorly, over the curving turnpikes and under the oblique bridges, finally embracing the liminal spacings. His journey down small roads and pathways eventually led back to the main jugular vein. For roads, like rivers, begin as small, empty, unknown tributaries that eventually link in to major arteries of the nation. 90, 180, 270 just then, now 360 degrees. Come full circle.

It was now midnight. Louise lay lusciously lying leftward on her luxurious lovely liquid bed. She was snoring lightly, relaxed in her sleep of silence and peace.

Eyebrows, coming into the bedroom, sniffed a sock lying on the floor, and then leaped up onto the bed with her mistress.

—Meow, mewed Brows. Love me, pet me, rub my belly!

She purred lightly and then nuzzled up to her human, soft and fuzzy.

Out in the dark farm fields of the night, a train whistled its lonely call into the wind.

Matt pulled off his traveling shirt and put on his sleeping shirt. He collapsed into his bed and slept.

Two pink Moscatos: they were toasting to each other, Earl and his boyfriend, Floyd.

Russ played pool at the local bar/dance club called the Library Annex with his friends Maurice and Kyle. Scoring a critical shot, he celebrated by taking another vodka shot.

Edwina sat alone on her bed, with a laptop propped before her, watching a witchy movie and drinking wine.

Perpendicular to Russ, who was going off on a tangent about his lack of a significant other, the figure of Charley, a slumpshouldered, fatchested, weaklimbed, googlyeyed, brownhaired, free of freckles, scruffybearded, largemouthed, giganticnosed, lugheaded, deeppocketed, barelykneed, beefyhanded, pricklyhaired, redfaced, chubbycheeked, frailarmed hero sat lumbering on his bar stool, watching his Russian friend and other friends playing a game of pool while drinking a beer. He sat silent, to himself, and then noticed the attractive blonde girl walk onto the dance floor. Contemplating for a few minutes, he then leapt down from the stool and waddled over to the dance floor.

It was 44 degrees outside in St. Louis. 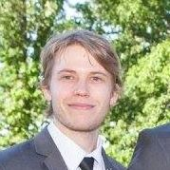