Ed, a widower in his fifties, walked toward the beach in Fairfield. A loan officer named Ed Green walked to the crowded beach from the parking lot. Ed, stepfather of a twenty-something daughter trekking across Australia who hadn’t spoken to him in six months, sat down on the sand at the high water mark. The tide was turning.

The ocean glared at him. He pulled a deli sandwich from his pocket. It was wrapped in waxpaper. Ed Green felt a small degree of relief to see that waxpaper still existed. He vaguely recalled an art project in second grade that involved waxpaper. The art teacher’s name was Miss Maddox. Gently rubbing circles on his broad forehead with the manicured tip of his index finger, Ed summoned the names of his grade school teachers: Miss Walsh, Mr. Hernandez, Mrs. Roper… Mrs. Roper especially would not approve of his situation. The sandwich was too messy.

Ed tossed it to the gulls. The gulls strutted exultingly around him. He was their new best friend. Ed Green needed a new best friend. He spoke to the closest bird. “The rules I have lived by are not necessarily the ones I would have chosen,” he said. Alarmed, the gulls took flight. Ed reached for a cigarette, and then remembered that he hadn’t smoked since his wife died.

Nearby, an older man in a canvas lounge chair turned and squinted and said, “What, you don’t like mustard?”

The man’s squint reminded Ed of his wife’s furrowed brow while thinking through a bridge hand. He heard her voice in his head, “Take your losers first.”

“Not anymore,” Ed answered, “I don’t like mustard anymore.”

The man fumbled for his sunglasses.

“I can’t place it. A familiar face out of context–” the fellow said.

“But, the jury is very likely going to let me off,” Ed said.

“Were you in the paper?” the man asked.

“The editors apparently liked my profile in the bank vault,” Ed said.

The wind seemed to blow his words away.

The man tugged at his sunhat and shrugged. “But I still gotta listen to all the garbage inside.”

Ed winced and nodded and lay flat on the sand.

Ed Green, third in his class with a master’s degree in finance from the business school at UConn, stared at the sky. One small cloud stained the expanse. Ed, who with his attorney friend, Randall, always walked eighteen instead of using a cart, flexed his shoulders and chest muscles, which set off an involuntary spasm through his body. Ed felt like a gill-hooked fish twitching on the sand. He pulled off his tie and opened his shirt to the sun and tried to ignore the trash talk inside and the buzz of the phone in his jacket pocket. He half expected the gulls to peck at his hairy belly and he half remembered a story from Mrs. Roper’s class on Greek myths about birds pecking out somebody’s liver and he noted that his high school yearbook lacked the award category, Most Likely to Become a Tragic Figure.

The blue of the sky resembled the blue of the swimming pool in his backyard and it beckoned for him to fall forward, face first, the same way he imagined his wife falling in moments after her stroke. The phone rang again. It was his attorney.

Ed yanked open the device and answered, “Are they coming back?”

“No, and that’s okay. The longer the jury stays out, the better. Where are you?”

“Down at the beach. I’m sorry. I needed a break from the courthouse. Those faces. What a bunch of punks. How is it that a line-up of nobodies, a plumber, a hairdresser, a secretary–all obviously with their own serious problems–get to decide my fate?”

A shadow from the small cloud fell onto Ed like a dark spotlight.

His attorney said, “That’s the system. A jury of your peers. I know that concept is hard for you to accept.”

“If they were my peers, they’d demand that the judge give us time for a two-martini lunch. I should have just taken a plea.”

Randall sighed. “Please don’t come back to the courthouse drunk.”

“Like I said, the longer the jury stays out, the better, probably.”

The wind created a rustle of static in the phone.

“Okay, so why are you calling?” Ed asked.

Randall said, “Just checking in. I’m a full service attorney. Just wanting to cheer you up.”

“Do I get charged for this?” Ed asked.

Ed closed his eyes. He said, “A mortgage is a mortgage. A foreclosure is a foreclosure. It was like killing ants. Everybody does it. Hey, you maybe have a little twinge of doubt about whether it’s the right thing, but two seconds later it’s forgotten.”

“I shouldn’t be hearing this,” Randall said, “Let’s think about Ellen. Let’s just be happy that she’s gone.”

Ed studied a burst of orange on the inside of his eyelids. He said, “Yes, that’s what I used to think too. But then I hear my daughter has been telling people on Facebook that the reason I did it was to support Ellen’s lavish lifestyle.”

The old man in the canvas chair threw in an unsolicited comment: “Cherchez la femme.”

Ed waved at him to shut up.

“Could be some truth in that,” Randall said, “She did gravitate to the ritzy lane.”

Ed shook his head and sighed, “Ellen was like a town where the street names change. You think you’re on ‘Pleasant and come to find out that three blocks back it turned into ‘Division.’ No, sorry, we had our differences, but I can’t lay this one on her. I dream about contacting her on the other side. She’d give me the real verdict.”

“What are you talking about? I think you forgot to put on your sunscreen,” Randall said.

“The verdict from the other realm.”

Randall laughed and spouted, “That particular jury is definitely still out and will be for a long time. Hold on. I’ve got another call.”

Ed pressed ‘END’ and closed the phone. He sat up and hurled it into the ocean.

The old guy in the lounge chair coughed and said, “I know what you mean. Gotta wonder if any of this stuff really matters once we cross over.”

A candy bar wrapper blew up and stuck in the webbing of his chair.

“I thought you didn’t hear so well,” Ed said.

“It comes and goes,” he said. “By the way, you’re not planning to do anything stupid, are you?”

Ed Green shrugged. “Besides throwing my phone in the ocean? No, I’m too chicken.”

The old man leaned over and stuck out a hand. “Frank Hernandez,” he said.

“Frank Hernandez?” Ed chuckled, and supplied a quick handshake. “Mr. Frank Hernandez? My fifth grade teacher at School #34? The universe sure has it in for me today.”

The bronze, bald head smiled. “No. Me, a schoolteacher? No way. I wouldn’t last an hour. I’d be telling those kids the hard truth, instead of filling them with pipedreams. No, I wasn’t a schoolteacher. I was a restaurant inspector in Hartford and I took bribes and got caught and ended up doing five years on the state farm.”

Ed propped himself up on one elbow.

“Maybe the universe isn’t so crazy after all,” Ed said. “Maybe you’ve been sent to give me a real verdict. I’m certainly not getting one from those bozos at the courthouse and I’m not going to get it from my dead wife.”

Ed tried to soften his tone, sensing that–especially in his court testimony–he came off sounding too cynical.

Frank Hernandez coughed louder and longer than his thin frame looked capable of. He said, “Once you’re part of the club, this kind of thing happens all the time.”

Frank Hernandez gazed out at the water. “Not sure what that means exactly. It’s different for different people. Some get religion. Some volunteer at the community kitchen. Yeah, some way, somehow, you do have to settle up.”

“That’s not what I wanted to hear,” Ed said, “I wouldn’t know where to begin–settling up.”

A colorful beach ball fell out of the sky and bounced over Ed’s legs.

“You could tell me more about your daughter,” Frank suggested.

“I thought you didn’t hear so well,” Ed said.

A silence ensued, an uncomfortable silence, exacerbated by the rumbling of Ed’s stomach. Ed regretted throwing away his sandwich. He missed his conversational ease with strangers, the five minutes of hearty banter with clients before getting them to sign on the dotted line.

Ed Green, sweating now, pulled himself up off the sand and signaled for the old man to stand up too. Frank needed some assistance finding his flip-flops. Ed Green and Frank Hernandez slowly walked down to the water’s edge. A tanned ex-offender and an itchy, indicted banker slowly walked the length of the beach. The sandpipers followed, cocking their heads, as if listening in on the discussion. The ocean smoothed a path. Frank Hernandez accompanied Ed Green all the way to the boulders strewn with the latest deposit of tidal flotsam. The older man in the floppy hat reached down and selected a broken piece of lathe and waved it around the banker’s head and shoulders in a gesture that, from a distance, looked like some kind of initiation. 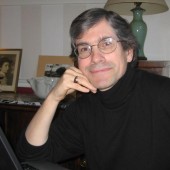 Ian Woollen lives in Bloomington, Indiana with a very musical wife and son. His day job is psychotherapy. His short fiction has appeared in Juked, decomP, The Massachusetts Review, and The Mid-American Review, from which came a Sherwood Anderson Prize. His first novel, Stakeout on Millennium Drive, won the 2006 Best Books of Indiana Award. A second novel, Hoosier Life and Casualty, is out from Casperian Books.