Caleb has only been awake four minutes when the refrigerator calendar alerts him that his wife is ovulating again. Though he is comforted by the predictability of her body, its rhythms and cycles, he knows this guarantees nothing. Just as the disturbance in the tropics is not a guarantee that it will rain, no matter how badly the city needs it, no matter that people have begun praying for a hurricane to thrash some poor island in the Gulf in the hope that their own trees might benefit.

Caleb pours himself a glass of milk. When he returns the carton to the fridge, he is reminded, by the absence of a circle around today’s date, of the water ban the city has imposed to help combat the drought. Though their lawn is scorched and thirsty for it, Caleb and his wife can only water the grass two days a week, and today is not one of those days. Caleb briefly considers adhering to the rules, but then he is outside on his front porch, the lawn he has seeded and soiled brown and begging. He uncoils the hose, throws it like a buoy to the grass, then checks to see that his neighbor across the street is not watching through her old lady blinds, ready to report him.

He plays out the scenario in his head. If anyone were to question his behavior, Caleb would be ready with the following defenses: he works full-time while also attending graduate school and therefore lacks the flexibility to tend to his home on someone else’s schedule; his next door neighbors, who are allowed to water their yard on Saturdays, do not have a need to water on Saturday or any other day because theirs is a yard made of rocks; and lastly, he does not make a habit of breaking rules. Caleb is considering this last defense when he notices that the sprinkler attachment he uses to water the lawn is gone.

Caleb walks around the side of the house, checks the part of the yard he cannot see from the front door. He considers waking his wife to ask if she moved it, but he is  certain she hasn’t. Almost as certain as he is that she does not want to be woken to be asked about a sprinkler attachment unless the question is accompanied by a prepared mug of coffee and an offer to deposit his sperm inside of her body. He returns to the front porch. The sun is already working overtime, sending out smaller suns to do its work. There is one on the roof of Caleb’s car, on his wedding ring, on a piece of tinfoil stuck in the asphalt. Even with his hand as a visor, he can only make out the white shadow of things, the things themselves obliterated.

In his peripheral vision Caleb spots his neighbor, a man who Caleb almost never sees working outside, kneeling beside his driveway with a small shovel. To Caleb’s surprise he appears to be digging something out of his yard of rocks. The neighbor waves. Caleb nods. “You didn’t happen to see someone run off with a sprinkler attachment?”

The neighbor swipes his forehead with his forearm. “Don’t think so,” he says. “Any interest in a couple of these baby agaves?”

“No, that’s okay,” says Caleb, wondering if possibly the sprinkler has fallen over in the grass somewhere and he just can’t see it.

“You sure? I’m just gonna dump them.” The neighbor stands facing Caleb, his shovel at his hip. “Last chance.”

Caleb realizes he hasn’t been listening. He rewinds the sound reel in his head several seconds. Somehow he locates his neighbor’s voice, which sounds mysteriously like his own. Baby agave. The words register separately, then together. Though it is a new sensation, one that he is still getting used to, it is almost impossible for Caleb to hear the word baby without feeling a simultaneous kick in his throat, or more accurately in the hollow groove just below his Adam’s apple.

“I’ve got these baby agaves. Just shoots from the bigger plant, but they’re taking over. Figure I’ll toss them if someone else doesn’t want them.”

Caleb waits for the kick but this time it doesn’t come, perhaps because he is anticipating it. It is not unlike a hiccup, or the feeling that he hasn’t fully swallowed a pill. “Nah,” he says, “I mean thanks though, that’s—”

For months now his wife has indeed envied the large twin agave plants presiding over their neighbor’s pebbled yard. Ever since the day they were offloaded by truck and placed in the ground, she has mentioned them at regular intervals, how graceful they are, how their strong broad leaves seem like swords smooth enough to sleep on. That same day she accused Caleb of lying when he told her how much, given their impressive size, the plants must have cost. On a different day, his wife took pictures after noticing one of them had bloomed—like something out of a science fiction film, she said, and Caleb arrived home to confirm the appearance of an asparagus-like stalk at the plant’s center shooting skyward. The day after that, the two of them reclined in front of Caleb’s laptop screen after lovemaking, his wife’s legs in the air in a last-ditch attempt to seduce gravity. They looked at the pictures of the alien yellow sprouts that sat bird-like on the branches, then went outside to look at them again. Later the same day Caleb decided against telling his wife what he’d read on the internet, that the agave blooms only once, at the end of its life, leaving behind small shoots at its base before it dies. Though he is no longer sure he agrees, Caleb remembers thinking what a wonderful way to go.

Caleb’s neighbor crosses his yard with a mound of the small gray shoots. They sprout from his open palms like fingers. “Please,” he insists. “They’re taking over my lawn.”

Caleb thinks, but does not say, that baby agaves are not taking over his neighbor’s lawn. For one thing, his neighbor does not have a lawn. If he did, he’d have weeds to contend with, missing sprinkler attachments, the problem of when and how often to water.

“Where should I put them?”

Caleb looks helplessly around for a container of any sort. “The ground is fine,” he says. As he watches his neighbor deposit the plants at his feet, he is amazed by the surreality of the transaction. Four minutes ago he was a man who sometimes thought about one day purchasing one or more agave plants. Now he is a man who owns several. Only later, when he is driving to the store to buy a new sprinkler attachment for the lawn, does he imagine his wife’s reaction to this new discovery. On the way home, he drives faster. 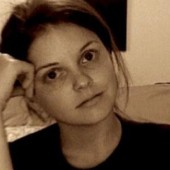 Rachel Howell grew up in Nashville and is now a reluctant Texan living in Austin, a city she loves in the six months that aren't summer. Though she misses rain and green things, she finds a certain beauty in the desert-like aspects of the landscape, and could not have written this story without it. Rachel received her MFA from Queens University of Charlotte where she began a novel that she will someday finish. This is her first publication.