Back Water – A Usable Distance On those days when I drive in to work in Chicago, my return along the Dan Ryan Expressway is guided by the signs: I-57 MEMPHIS. My heart quickens. I’m going to Memphis! Nothing intrudes but 530 miles and a broken radio. I’m musicless and heading south. When I exit west of Markham at 167th Street, south of Chicago and far short of Memphis, I’m reminded of the gulf between those “unfortunate” adverbs, here and there. Place is that which one awaits or is awakened to in the middle of the dream of America. We feel our way between there and here. There always imagined or recalled. Here always far too short. In Memphis, the Peabody Hotel bills itself as the beginning of the Mississippi Delta, but twentieth century history in the Americas intrudes. Why doesn’t the Delta begin with Chicago’s South Side?

American geography disrupts that dream. In a research writing course on Chicago’s history and geography, I push students to define the city by region: North, South, or West. I preclude “Midwest.” Too easy. Chicago as North, situated on the edge of a great, northern lake whose bend is glimpsed from Lake Shore Drive’s Chicago River bridge and reaches towards Canada. West, as in the point of purchase and capital on the edge of an expanding empire, William Cronon’s “nature’s metropolis.” Or South, as in terminus of the migrations by African Americans and Latinos throughout the past century and into the present one. The Delta cutting far north of Memphis. The US-Mexican border as one extended region running from Texas to East Chicago and “the Heights.”

Three narratives center my sense of the task of pinning down these American geographies—moving waters, the English language as it wraps itself around Native American names, and a more general sense of dislocation. Place works itself out between these greater stories and their tensions. Populations move with the waters, mapped or imagined. Jolliet first saw the Chicago region during floodtime and mistakenly assumed that the waters were connected. The Great Flood of 1927 sent people sprawling north. Closer to present, a history of escaping poisoned streams and shallow wells. The Great Lakes Compact claiming Lake Michigan’s waters for its surrounding states. The Lake itself strangely migrating west at the pace of one-quarter of a centimeter per year.

Second, the drama of naming. How does the English-speaker’s mouth accommodate the names of these places, even those that “have no name?” How does one “read the map?” The oldest “thoroughfare” in Chicago might be Milwaukee Avenue, as it approximates the path of a long-extant Native American trade route. As John Matthias reminds in “Facts from an Apocryphal Midwest”:

You can even drive

your Pontiac to Pontiac.

But only trickster Wiske’s brother

in a Tecumseh to Tecumseh.

The prairie’s new mythological machinery that names and blesses its latest commerce—the iron horse and pork, graft and real estate, fracking and potable water. Beneath these things, the dream that we give to place as we leave one for another. Dislocation the real condition in the Americas. According to Robert Kroetsch, between here and there, one is “in America and alone.”

I’ve attempted to use the long poem as an approach to burrow into the history here, the “complex occasions” at the heart of every journey into the Americas. How does one map a geography that never stays put? In a few miles of southern Illinois, one passes through a handful geologic features. Floodplain to bayou to sandstone bluffs. Then, prairie. How does one measure points of departure and terminus? Route 66 connected Chicago (and Springfield) to an eventual California, although does the highway itself move west or south? Riding the 80 Bus along Irving Park Road, I feel the thrill of glimpsing the prairie stretched out on an east-west street in Chicago. Flat west. Nothing intrudes. Then, I recall the West Side and its complex histories. The focus is a moving city.

For Twain, Melville and others, the journey west and south was on a river. So, Memphis-bound, I ask where’s the goddamned route? The poems here have only a canal for passage. Its “there” always a confidence game. A human geography, its history beneath the land. 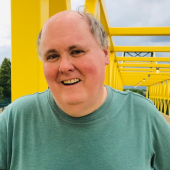 Garin Cycholl’s recent work includes the forthcoming Horse Country, a collection of shorter poems that reconsiders the iconography of the horse in American culture. Other recent work includes nonfiction in Heart</em., as well as a film adaptation of Walker Percy’s novel, Lancelot. Since 2002, he has been a member of Chicago’s Jimmy Wynn fiction collaborative.