Cherry Bomb was once a beauty queen. A long, blonde Barbie doll with sharpened nails, tattooed doves on her lower back and a smile painted on, a dewy dripping blood-red. She’d been young then, barely sixteen. She’d worked her hometown day and night, breaking cherub hearts for fun. Twenty-nine in count.

But she’s alone now and she’s not so young. She hangs around her mother’s empty house, pinned up against the mailbox, calling out to strangers, wishing one would holler back. She stands there, a wad of bubble gum wedged between her teeth. She waits, blowing perfect pink bubbles and snapping them back in a restless fury.

No one comes. Not the boys, not her mother, not her sister.

She looks up at the nighttime sky, at a golden light between two shapeless clouds. She knows this must be God.

“Where have they gone? Why have they forsaken me?”

And He speaks to her: “Ask and it will be given to you. Seek and you shall find. Knock (loudly) and the door will be opened to you.”

Cherry understands. She knows where she must go.

Before leaving, she kneels before her mother’s overgrown floral bed, now flooded with weeds and trash. Cherry collects a number of dandelions, weaves them together and adorns herself with a golden crown. Now, she is ready.

Cherry passes through the chained-linked gates and walks the fair at night, baby blue eyes drawn wide. She weaves between carnies without thinking. Makes her way to the tent like it’s the only path she’s ever known. She stops outside the entrance. Takes a second to finger the parted canvas, drag her heel against the pressed dirt floor. She stands entirely still.

At the very same moment, across the fairgrounds, the Big Wheel stops turning. Swinging gondolas freeze mid-motion. At the peak, a pair of teenagers caught in a kiss.

When Cherry starts moving, they all do. As she walks through the parted doorway, the Wheel begins again in slow circles. The teenagers pull out of their prolonged kiss and away from each other. They don’t speak for the rest of the ride. And when they part, they part for good.

Cherry walks deep into the tent. Inside, the freaks sit perched on their platforms, a burning spotlight on each one. Mobs of children and lovers press up against the stage. They reach out to the freaks, clamoring, calling, pointing, hoping to be touched. Cherry lifts her hands in prayer, stick-on nails pointed up like knives. The crowd goes quiet. They all turn to face her. Cherry separates her hands, and the crowd splits down the middle. They leave, mouths shut, dreaming.

The freaks look down at Cherry. They’ve seen her kind before. They know just why she’s come.

The Siamese Twins, Brother and Sister, step down from the stage. They reach four hands out to Cherry. She moves toward them.

Cherry touches the conjoined heads with reverence. She kisses the bridge, leaving a red, glossy mark on the tunneled skin.

“If it didn’t kill me,” Siamese Sister says, “I’d drive a spike through his neck. I’d sever the tie and become only myself.”

Cherry draws a line down the bridge with the sharp of her fingertip.

“It’s your fault,” she says to Siamese Brother. He tries to walk away but cannot move.

Cherry leans in close to Siamese Brother, her sticky lips against his ear.

Siamese Brother can feel the pulpy words. He closes his eyes. Thinks back to the moment of birth, never his own.

Cherry imagines taking a handsaw and driving the rugged pikes into the bridge, rocking back and forth until one is made whole again. She thinks of her own sister, a thousand miles from here.

“My sister,” Cherry says, “left home at sixteen and never came back.”

“You are lucky,” Siamese Sister tells her.

“If only I could have the same,” Siamese Brother says.

“I thought she’d call for me, but she never did.” Cherry leans into the Siamese Twins. They wrap their outer arms around her.

After a moment’s embrace, Cherry pushes away from their doubled grip.

“Don’t you understand? We have eyes of the same color, but she sees when I can’t.” She covers her eyes with her hands. “Like this.”

Siamese Brother and Sister cover their own eyes in unison.

“What do you see?” Cherry asks.

“Because you are together, you cannot understand.”

Cherry leaves them. She crosses the tent and kneels, still blinded.

The Human Pretzel steps off his platform. His dwarfed, flopping body falls a great distance to the ground. Without standing up, he crawls toward Cherry like a wave in the open sea. A contortion of limbs.

He sits before her, Indian-style, ropy legs bound up and tied.

“I know you’re there,” Cherry says. She uncovers her eyes and reaches for The Human Pretzel. She picks him up and places his twisted body in the palm of her hand.

“I need freedom,” she says.

“You won’t find it here,” he answers. The Human Pretzel loops his arms together, steps through the circle and rounds his arms back again. He keeps up the routine.

“How did you break the bones?” she asks.

The Human Pretzel pinches his forearm with ease.

“But how did you break free?”

Cherry draws The Human Pretzel from her palm into her chest. He melds into the cave of her slender body.

“I grew up in one place and never left,” she says. “And now, they’ve all gone from me.”

Cherry thinks of her mother’s house, blue shutters chipped to gray, the mailbox door crooked open, eternally waiting. She walks up to the front porch, sees her mother stringing tinsel along the tree, center-window. Cherry stands still, watching, fingers intertwined, and head bowed. After a few prayerful moments, she crosses through the front door. She searches for her mother, but the house is now empty. Her mother is gone.

Cherry drops The Human Pretzel to the ground, and he slinks away. He cannot help her forget.

Cherry places her hands flat on the dirt floor and digs her nails down.

King Cobra glides down from the stage, a closed wicker basket under one arm. He sets it down before her.

He opens his mouth wide to reveal a split tongue, spliced down the middle, two pointed prongs, each writhing on its own. A guttural hiss blooms from the back of his throat.

“Don’t be afraid,” he tells her. He touches the conclave between her breasts. “I can feel you beating.” They all can – the carnies, the lovers, the teenage kids, now circling a house of trick mirrors.

“What will I find?” she asks. She leans forward, reaches toward the basket.

King Cobra winds his way around her. Removes a black bandana from the sleeve of his shirt. With ease, devotion, he draws the bandana around her head, a tight knot at the base. She’s blinded once again.

He removes the lid. Takes her hand.

“Step inside.” And Cherry obeys. She steps into the basket, knows what’s there before feeling it, first, with the bare of her leg. Smooth, dry, the satin of her favorite dress. It winds around her, draws her in.

Cherry crouches down into the basket, lid closed behind her. She lets the thing slink along her legs, her belly, the soft of her pulsing neck. When the fangs bite down, they sink deep into her flesh. She doesn’t move or scream or cry. She stays still, lets the blood run down.

Cherry removes her blindfold. She can see it now. Black body, stained mouth, a golden crown to match her own. She slides her fingers along its yellowed neck.

And then she hears the music, quiet, luring. An ancient lullaby.

Cherry begins to sing. She stands, pushing the lid from the basket, and ascends to the apex of the tent. She levitates above them, her blood dripping a glorious rain over the freaks below.

And the freaks, they cheer and cheer. They call her back down.

She floats down from the ceiling, purpled and weak. She kneels, the blood still seeping from two pinholes in her neck. The freaks gather around her.

“Is this pain?” Cherry asks, placing a hand over the wound.

La Bella Muetre breaks through the circle. She lies down in front of Cherry, naked, palms up.

“Look at my body,” La Bella Muetre says. She is covered in Chinese dragons, pierced hearts, crossed out cursive, pin-ups and a single rosary, wedged between two holy hands, spread out across her ribcage. Every inch of her body, infused with ink – fading grays, burning reds and the deepest black of a newly formed name: “Joan” below the navel, now scarred.

Cherry thinks of the needles, of pierced flesh.

“But I feel too much.” She struggles to stand.

Cherry limps toward the largest woman she’s ever seen.

“Give me restraint,” she says.

The Fattest Woman on Earth touches her bloated hand to Cherry’s waist.

“No one loves you,” The Fattest Woman on Earth says, not asking. She reaches her doughy, dimpled arms around Cherry and drags her close. “No one ever has.”

“I was like you once, unloved, empty,” The Fattest Woman on Earth says, “and one day, I was filled up. My heart was so heavy I could no longer stand.”

The Fattest Woman on Earth rocks Cherry back and forth across her lap. She sings to her, strokes back her bloodied hair.

Hero The Hulk can no longer bear it. He leaps off his platform, a blooming dumbbell in one hand. With the other, he scoops Cherry up and lifts her high above his head.

“Nothing. My nails would break.”

Hero The Hulk sets Cherry onto the ground, center-tent. Her body is limp, translucent.

The freaks gather around her, all watching, faces pressed close.

Her breathing slows, sharpens. She slumps her hand over her chest. She is dying.

She crawls over to The Fattest Woman on Earth. Reaches her arms around a mammoth, swollen ankle.

The Fattest Woman on Earth keeps her chins up. “No one will look at you. There’s nothing to see.”

The Sword Eater pulls the knife from his throat. He makes a swift cut through the air. “I can help you,” he says. “I’ll cut off your limbs – the next Extraordinary Human Stump.”

“Then pierce every inch of your body and become new again.” La Bella Muetre runs her hands along her own colored skin.

Cherry looks down at her body, now clammy, graying and numb. She thinks of her former beauty, she thinks of what’s already gone.

Hero The Hulk kicks up dirt at her crumpled body.

And the freaks, they understand. They lift Cherry in their arms, and cast her from the tent without looking.

Cherry lies on the dewy grass, eyes wide, pupils ballooning. The baby blue iris dissolves to black. And the carnival, it all bleeds together, lights growing and faces blurred as children walk past.

It’s almost over, she knows this and smiles. She will be free.

She lies there, listening to the night, to a black, starless sky, but He does not speak again.

When her heart stops, the Big Wheel keeps turning. A new pair of lovers rounding the top, hands clasped and laughing. 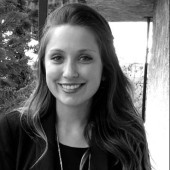 Currently, Lindsey is working on her MFA in Fiction at University of California Riverside, and writing American Candy, a collection of short stories that explores the loneliness, mysticism and magic inherent in the Midwest, and canonizes the bad girls that rule the land. Her fiction is featured in the current issue (#17) of Midwestern Gothic.