Pip signed P with prudent intention, even on the dotted lines designed for the business manager, the record attorney, the club owner. She didn’t have time for Pippin anymore. The effort seemed like an old responsibility. And now in letters to her mother she’d become just P, a deadweight daughter in the form of a skinny, girl­tempered rock star. At nightfall the tornado warning was announced over the radio, and the band waited to hear the sirens in the next county over with euphoric hankering. Take cover, they announced, but nobody took it seriously except Pip. She picked up a spiral notebook to write her mother goodbye in case they were ripped away out of the ground.

The band was Peace Fight, her band, and she’d locked down cheap rehearsal space in a room at the Little Pyramid Hotel in a town called Avalon in bumfuck. Forty bucks a night, thirty­five if they didn’t turn on the TV. They’d need the extra time with the new drummer. A girl drummer, and that was cool, right? People would respond. They’d expand their fanbase coast to coast, not just on the dodgy coastline bar scene, play on MTV, get an interview with John Norris, headline a tour with a stop at Radio City Music Hall. They’d have a fleet of band t­shirts, not just bumper stickers.

But with a careful voice she’d asked where Nate was, idling in the morbid presentiment. He wasn’t back yet from the gas station. And what kind of sign was it that their kinda­sorta hit song “Bad News Baby” was playing on the radio just before the weather break? Nate was supposed to fill up their van, grab some cheese doodles and a frozen pizza, back in twenty. It’d been an hour since he’d kissed her goodbye. The grandest gesture in the quiet prayer of drive safe, don’t you dare leave me! Their song, like a ringing phone, a dead birdsong.

Singin’ our songs now, hey that’s the way it is here

But boy, I don’t want you singin’ along

The first verse cut her down her spine. She hated the words, the phony way they’d made her voice sound in production. Her lyrics were cheap. That shared lesson on marching up the road less traveled, no more burning bridges, mind games out the window like old love, that special type of exodus only found in rock and roll. But this was the 90s. She had to write with purpose.

“How do you play a granddaddy daughter?” Their new drummer. Boots Scallywag. She lifted the acoustic instrument into the air.

During their first rehearsal at a studio in Bismark, Boots had referred to Bob Dylan as Bob Die­lyn. She had short blond hair with bangs across her forehead, a tattoo of a dolphin on her inner wrist. “They don’t even drink water – fish. They don’t. It’s ’cause they’d drown. Too much you can drown.”

Pip peeled her gaze from the window expecting fog or smoke. The shaking of the streetlights across the shadow road, the blinking green light like a warning. The last time she saw her mother she’d had writer’s block. It was last winter and the dog was barking on the porch, her nightgown with botanical print. Pink cheeks from rosacea, high as a kite.

“Am I in your flashlight?” Boots said.

Pip was positive this chick reserved questions like this to get in the corners of her nerves. “I’m thinking is all.”

How twenty­something of them not to flee to the basement but instead to sit on tops of instruments they couldn’t play because they couldn’t plug them in! How twenty­something to laugh at the unlikelihood that they’d rehearse by a cornfield that was getting hit by a tornado! Her twenty­five years were up. She’d be put in the ground, below the grass like a seed so her mother would have to talk to her through the stars. They’d find her body under the crushed roof.

Pip added to her letter, If I die will you be lonely?

“Will you let me watch you?” Pip gave her a careful look.

“Like, you’re working on a song? That’s why you’re holding the pencil, that right?” “I’m writing to somebody that loves me.”

When the tornado news flipped to their county warning, their indifferent lounging got a little more serious for five whole minutes. It was Pip and Boots, J.T., the bassist, their music friends, Michele, Donny, Britt, Tyler, and Gordy. Their dick manager, Jeff. Their new tech, C­Tag, and his girlfriend, Cheri. All of these people Pip didn’t know, sitting in vinyl chairs with their post­grunge looks. She didn’t want to die with them. She didn’t want to listen to the sirens with these people. If she had to die, why couldn’t it be at home in the sweet evening with supper on, under the covers with mom holding her hand?

“Do you dare me to wear a moo­moo on stage?” Boots said. She smiled with the face of a baby­doll. “I thought you were a pirate girl on stage,” Pip said.

There’s a soft side to me Mom. Like the way I loved as a kid?  Don’t fuss over me. If there’s always food, what more can you ask for but to live.

“When’s the last time you was scared?” Pip said.

Where had that come from, she wanted to know? Such a personal intrusion, Pip thought, treading on somebody’s experiences. The tornado, for crying out loud!

“I died this one time,” Boots said, lighting her cigarette. “They resuscitated me so I didn’t end up a ghost. Hey, you wanna taste?” She held it away at arm’s length.

Pip surveyed the room. Jeff was doing cartwheels. A grown man in his late forties doing cartwheels in the middle of a tornado warning, his flop of gray hair like a rag. She’d given him some lip two weeks ago about keeping their name in the magazines, how they needed a PR rep more than they needed him. She’d never done anything like that before, yell at somebody.

“I wonder where Nate is?” She’d meant to keep her feeling down, but looking out the window, he still wasn’t there and the streetlights were turned over.

And here it was again, “Bad News Baby” on high across the room. The single cassette. It had a little intro the album version didn’t. How could they play music at a time like this?

The lonely part of you

That’s lost on the lonely road

What did that line even mean? The lonely part of the road? She’d written it, she should’ve known. All in all, it meant nothing. And some poor soul would apply it to their own life and blow it up like a hot air balloon. There were cracks in it, it wasn’t worth identifying, it wasn’t anything.

They keep playing the song, Mom. The radio song from the tape I sent you. I can’t think about singing bad news baby not during the dumb tornado, not during a flood, no time anytime. When i’m gone away from you and you can’t write me anymore, just think to yourself she would have written back. I would’ve!

“How long you been with Nate?”

“Not long enough to talk about it,” Pip said, smiling. Smiling made his missing better. “He’s cool. He doesn’t give a shit what anybody thinks of him.”

Boots might have been brain­dead about Bob Die­lyn, but she was considerate and independent, a brand of musician Pip had never known outside of Nate.

The windows rattled as the wind echoed. Was this normal? She’d seen it in the movies and sometimes it ended up fine. The fragmented glass, she’d have to shake her hair out for days.

Take Cover Immediately, the radio automated over the calm over the wind shaking everything up.

“I don’t know how to sing,” Boots said. “You knew that when you hired me.”

“The letter you’re writing your mama. How’s she gonna get the letter?”

Pip shook her head, pretending to be unscathed by the question of how. Well now, Boots, she thought. The letter would be found in the rubble. That was the way these cataclysmic events became conditions you learned to live with, not suffer from. A budding rose in the abandoned cemetery. A healthy baby born to the war­torn village. The fog that lifts for the sun in midwinter. The last house standing when the tornado hits. The diary in the attic. Some things would survive this, the letter to her mother, with all of her I’ll Miss You Forever’s, being one of them.

“It’s hard not to end up dead,” Boots said. She strummed the granddaddy instrument with her cigarette still between her fingers.

“Nobody’s gonna die, shut up about it,” Pip snapped. Nate was fine! He was fine!  She was sure she could smell smoke, but maybe it was in her imagination. 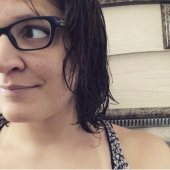 Kayli Scholz's fiction has appeared in The Fem. She writes gritty short stories and is working on a novel. She's a voracious reader from Ft. Lauderdale. Some of her work can be found at kaylischolz.blogspot.com and she tweets at @kaylischolz.