The Beauty of Objects, Tough Women, and Blue 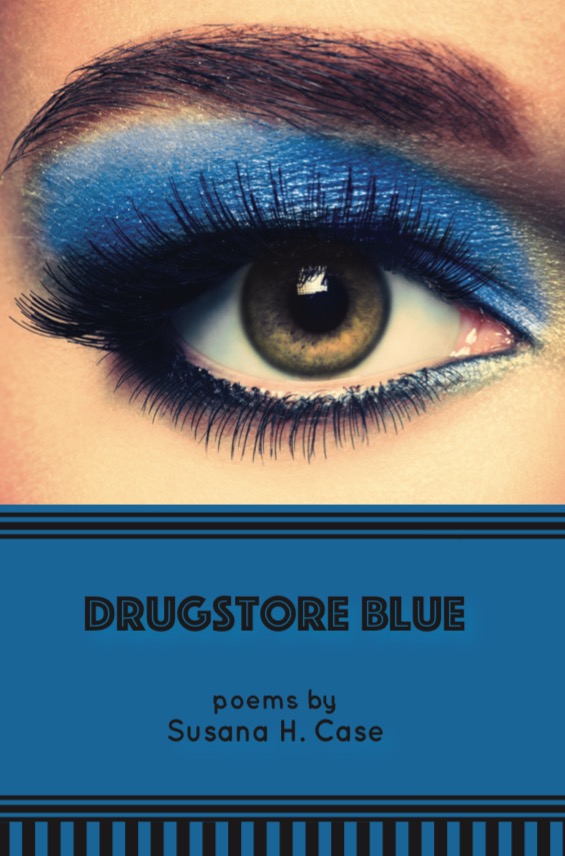 Before reading Susana H. Case’s delirious new collection of poetry, Drugstore Blue, pour yourself either a Pinot Grigio or glass of whiskey and, if you like, slip into a pair of blue stilettos.

As the title indicates, Case’s book is steeped in blue, with all of the color’s connotations of mystery, melancholy, lewdness, and impropriety. The title poem, “Drugstore Blue,” lays out Case’s main themes: love and sex with “reckless boys,” a world in which everything can turn from newness and possibility to “wet with wine, grief, or yearning,” with the passage of time. Many of the poems however, celebrate simple pleasures.. Love poems like “Don’t Talk (Put Your Head on My Shoulder,” “Road Trip,” and “Old Man with Beard” rejoice in both body and emotion, while others revel in simple objects such as pottery, rugs, jeans, and gardens. One of my favorites, “The Rare Blue,” takes the reader back to the 1970’s and 80’s, when brilliant blue eyeshadow, preferably brushed up to the brow, was the style. Here, the reader can tumble around in Case’s images and language: “woad and indigo,/cobalt,/cornflower,/ultramarine,/lapis lazuli.”

Case lists shades of blue that appeal to the eye, but her vowels also fill the mouth with rich “o” and “a” sounds. Blue eyeshadow, that most quotidian of beauty products, becomes: “tin-glazed/underglazed,/sancai lead glazed,/oxide blue glazed//the eye of God.”

In the most basic of objects, Case is able to discern the lavish art and beauty of the world. The eyeshadow shoplifted from drugstores is then worn by “warriors protected by blue” as they head to their battles: “the bowling alley, Cameo Lanes,/to Eddie’s Sweet Shop—into the fray.”

The book is populated with tough women: Hedy Lamarr, jezebels with no-good husbands, girls “who’d been singed by fire.” They suffer from failed relationships, the indignities of aging the risk of physical abuse and even murder because of their gender, and the sacrifice of their freedom and youth in exchange for money through marriage to wealthy older men. But, for Case, the risks that every woman faces, the choices between freedom and stability, are the necessary gristle of life.

In the poem “Protocol,” Case begins “For you, the choice is the sharpened knife/or the bandage,” then proceeds to ask questions and presents scenarios, challenging the reader to reach their own conclusions, often simply providing an image or figure of speech for unpacking. “Protocol,” for example, ends ambiguously: “The knife is nightmare,/and yet, necessity and beauty. The bandage/winds itself around the wounds/of your body and you, you try to love.” Case’s conclusion brilliantly turns the bandage sinister and suffocating, while the ostensibly nightmarish knife provides life’s beauty. And beauty is, after all, one of the main rewards of living.

Beauty is important to Case. It’s inseparable from desire and pleasure, and it isn’t sentimental. Her beauty consists of Vivienne Westwood’s “studs, chicken bones, nipple zips,” inseparable from rebellion and wildness. In “Bleached Blonde with Spiked Dog Collar,” beauty means “wearing bruise-colored/makeup and a latex négligée,” challenging the conventions of femininity and beauty that keep women coy and submissive. In this poem, the bruise is makeup applied by a woman herself; Case clearly distinguishes that mark from the actual mark of an abuser. The poem “Acid,” about an acid-burned woman who used to be a dancer and is now a “monster wife-wraith” sobbing in the kitchen, turns the search for beauty more overtly political, exploring how men threatened by female beauty and sexual autonomy retaliate against it in the most brutal manner. Even in such a horrifying poem, Case controls the narrative with her fine similes and sounds, such as the rough consonants of “scrape and graft” when describing a surgery, and the half-rhymed juxtaposition of “flight” and “wife.”

“Every one of us is a bralass goddess,” Case declares in one of the last poems of the book, “What Is It About Women Who Like Snakes?” “We are desire,/renewal. We are aligned/under the naked evening star,” the speaker concludes. Drugstore Blue is a book for goddesses and the men who love them: women who are gritty, imperfect, no doubt infuriating, but soaked through with exuberance and the never-ending search for pleasure. Case doesn’t ignore life’s inevitable pain. But she realizes that life is what we’ve been given. Put on those blue velvet stilettos, stride into the world, and don’t look back. 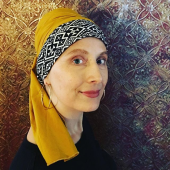 Anya Krugovoy Silver is a poet living in Macon, Georgia. She is the author of three books of poetry, The Ninety-Third Name of God (2010), I Watched You Disappear (2014), and From Nothing (forthcoming in September 2016), all published by the Louisiana State University Press. Her work has been published in many literary magazines, including Image, The Harvard Review, The Georgia Review, Five Points, Crazyhorse, New Ohio Review, Witness, The Christian Century, Poet Lore, Prairie Schooner, Southern Poetry Review, Shenandoah, and many others. Her work is included in Best American Poetry 2016. Her poems have been featured on Garrison Keillor's "The Writer's Almanac," in Ted Kooser's syndicated column, "American Life in Poetry," as an Academy of American Poets' poem of the day, and on Poetry Daily. She was named Georgia Author of the Year/Poetry for 2015. She currently teaches in the English Department at Mercer University. She shares her life with her husband, son, and cockapoo. Since 2004, she has been living and thriving with inflammatory breast cancer.