Every sentence from the novel Because containing the word “god.”

Because I wanted to explain the complicated feelings I think we all have about home, or at least the places we come from, and about having children, and about God and about living and then dying, about everything we all want.

I want to remember singing at God in the aftermath.

I want to tell you about the atheist owner, who tolerated the church music so long as we didn’t proselytize, Just love each other, he said, You don’t need a god to know love’s the way to live, he said.

I want to know if it was God who made music then so bright and full, sparkly with love and hope and joy, whatever it is that makes born-agains glow as if pregnant with faith. I want to tell you how I bent and howled over that guitar, singing praise songs to God or just that feeling of goodness I believed was Him.

I want to know if I really believed in god or if I just liked believing in something.

I want to see a god in the wilderness sky.

I want to tell you how that first friend I played guitar with is gay now, how he told me over a cup of coffee last year, and how I wanted to ask him if he still believes in god, and if so, if it’s the same god he believed in back when we used to sing together.

I want to know if we all believe in the same god, even if that god is an absence or fiction, capital or lowercase.

I want to tell you how they always end rhyming “lots of love” with “God’s blessings from above.”

I want to meet the Pope and ask if he felt closer to God the moment the smoke went up declaring him Pope.

I want to believe in all the Hindu and Roman and ancient gods.

I want to know about their god or Gods. 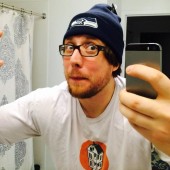 Joseph Riippi is the author of six books, including the novel Because and chapbook Puyallup, Washington (an interrogation). His next novel, Research: A Novel for Performance, will be published in October by Civil Coping Mechanisms. He lives with his wife in Fort Greene, Brooklyn.