Bees, Service and Privilege: How I Justify Writing in Dystopia There are many voices telling writers to stop it, stop it right now. There’s the ego, telling us we’re not good enough. Consumerist culture tells us we’re not producing enough and we’re never going to earn enough to consume enough to be happy. There are publishers telling us that we’re just not what they’re looking for. Our parents worry. The usefulness of our degrees dwindle. We continue to grow in number, increasingly aware of one another’s jostling elbows.

And let us not forget the Problems. Education fails the populace. The wealthy ruling class grows more and more bold in its corruption, no longer able to hide the degree to which it steers affairs, and yet continuing to set jaunty course for a bleak totalitarian future, as though there’s nothing the rest of us can do about it anyway.

How dare we write? Shouldn’t we be engineering clean water, teaching ourselves law, swooping into America’s schools and preparing the youth for the revolution? Shouldn’t we be fighting for our share of capital so we can make our voices heard in the only way this country knows anymore?

It was this line of thinking that found me in front of a classroom of sixth graders. I battled it out with cheerful optimism for the better part of a year, subsuming myself to the cause, but in the end my primal nature won and I spent night after guilty night using precious Save the Children hours perfecting a screenplay instead.

There’s a well-understood balance down in the trenches ofhumanitarian effort, especially in places where human beings struggle to replace with their frail bodies the creaking, breaking timbers of systems giving way under the weight of enormous need and insufficient funds, i.e. teachers, aid workers in war torn countries and inner-city social works, etc.

This is the balance: you have to find ways to take care of yourself or you will burn out. You will not be able to help others anymore because you yourself will be wrecked. Sustainability of service, is a good way to think about it. You can serve unsustainably for a couple of years maybe, or you can sustain yourself and serve for a lifetime.

I cannot serve sustainably as a teacher. That was the first realization that soothed my conscience as I struggled with the decision to cut short my contracted two years minimum, at the midway mark. I had two separate breakdowns while teaching; no matter how tired, I find a way to write. No matter how little encouragement or material reward. On more than one occasion, the desire to transcribe some idea or another has brought me back from the edge of doom. I don’t have to sustain my writing; it sustains me.

My second realization has been unfolding my entire life long: stories are transformative. They help us make that extremely difficult leap to a higher orbit of understanding. They plant seeds in our brains that mature for years and years and then bear fruit. They connect all of the everything to everything else. I have learned a great deal from stories of all persuasions. The theologically motivated stories of my childhood have been no less useful to me than the most objective or progressive scientific and philosophical texts of my adulthood. I’ve learned things from sitcoms on the level of things I gleaned from my wisest professors. Even the stories I write teach me things about myself and the world; the solutions presented to me by the novel I’m working on show me how narrow my vision is when I’m not reaching out to other perspectives.

My mother and sisters and I have a running joke about our headstrong, argumentative natures. It’s quite simple; only the punch line is needed or remembered. During a heated dispute long ago my mom burst out, “You’re WRONG!” in the most forceful, obnoxious way imaginable (go ahead, imagine it). Ever since, when emotions are escalating out of control, it is often necessary only for one of us to yell “You’re WRONG!” to dissolve it all into laughter.

Of course it’s never as simple as someone being wrong. Not for the religious or the scientists, not for the right or left, not for the wealthy or poor, not the humanitarians or the self-obsessed. And writing is like that, too.

A few months ago I wrote of the “priv-lit” book Eat, Pray, Love, disparaging its spiritualist aspects by calling it a beach read. I was upset from this position by a recent viewing of Under the Tuscan Sun, same genre, same idea: wealthy white woman recovers from psychic angst in exotic settings by pampering herself with a variety of pleasures of the senses and spirit. Yet it kept resounding with me because the universal is the universal, no matter the setting or privilege level.

I have to admit having been caught in the inferiority/superiority trap, which affects everyone, every single one of us with unconquered fears and unmet desires. And so, Elizabeth Gilbert, yes. If you felt the divine moving through you, and others felt it too, I concede to you your right to claim that moment. More and more I am coming to see how irrelevant ideology, class, and ontology are when it comes to the phenomenon I like to call the “truth shivers.” It gives me hope.

The third and final piece to my puzzle—why write?—comes from the bees. We all know that they are essential to the functions of every other living thing. Do they know this? No. They are equipped by their natures to desire to do the things that pollinate the plants. They like nectar. They can see the flowers they’re supposed to land on. They like to dance. They get a kick out of following the queen’s orders. And they sustain all life on this planet.

So if my nature pushes me irresistibly to do something, it seems worth taking heed. Our society is set up to channel our collective labor towards the desires of a tiny group of megalomaniacs. If we heed the dictates of consumerist society, that’s where our efforts will go. I would prefer not to align myself with their goals.

Sometimes it seems that only by denying all that is going on behind closed doors, only by denying the rapidly approaching death of our planet as a result of these secret meetings, the stockpiling of weapons and the increasingly insidious assaults on our privacy, free speech, and access to vital things like water and the internet, only by living in blanket denial of all that is wrong with the world can we keep our faces pointed towards a new day, keep building family units and planting gardens and putting words down on paper.

Major life changes, it turns out, can throw you radically off-balance. A recent series of events left me floundering in an ocean of fear, my optimism nowhere in sight, alone and directionless, my strong, independent spirit drowning in the certainty that my goals and desires would float forever on a distant horizon, as unattainable as tomorrow. This great irresistible terror sent me reaching back through the years for God, for parents, for a lifeline; anything.

Humility can go a long way in affirming exactly what is important, exactly what you believe. Here is what I believe: there are forces that guide us, forces that exist outside of us and beyond us. I believe that we need each other more than we can possibly know. And I believe, as Joseph Campbell does, that our stories are ancient and beyond us and telling all of us the same impossibly complex and impossibly simple story, over and over again.

My anxiety did not recede because I told it to. Life handed me, time and time again, in neat little packages, exactly what I was reaching for in the darkness. Because of this I found my will to live, to laugh yes in the face of the great stifling no of the void, learned again what faith means; gained enough of it to keep writing.

My reclaimed (and in some ways newfound) faith tells me to keep doing my little bee dance and trust in the bigger picture. Life will find a way. It always does. 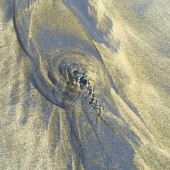 Rachel Adams studied fiction at the University of Alabama. Currently she resides in San Jose, where she teaches sixth grade English and Social Studies. You can find excerpts from her novella, Between You and I , in Volume 3, Issue 5 of Atticus Review (Feb. 5, 2013) and Issue 3 of Parcel.