I was twenty two, and it was Christmas Eve. I drove through thick, lazy snowflakes that weren’t so much falling as drifting down. My arrival at home would be a good present for my mom. Truth be told, it would be a good present for me too. I’d be home in time to see my sisters hang their stockings and to join my grandpa when he started on second dinner. It would be roast turkey with all the sides. That’s what it was on Christmas Eve. The breast meat was always gone for second dinner. We’d work on the drumsticks. Despite my age, he’d wait until my mom left the kitchen then put some bourbon in my glass. Afterward, I’d help her stuff the stockings, and she would make me wait until morning to see my own.

The car stereo scanner found KROQ, my hometown classic rock station, and Motley Crue “shouted at the devil.” I knew I was about fifteen miles from home, and the Big John river bridge was coming up. I banged the drum beat on the steering wheel and shouted along. I was driving slowly in the snow and just wanted to get across the bridge. The sign on the right warned me that the ridge iced before road. The “B” had worn off years ago. The rumble strips shook the car, and I slowed some more and honked. People always honked when entering the bridge.

I looked down but couldn’t see the river in the darkness. My dad and I used to fish for rainbow trout under the bridge. They liked the cool water in its shadow. It had been ten years since the last time we went fishing. I turned up the stereo and returned my gaze to the road in front of me.

There was a truck stopped on the bridge. It was an older model and looked to be two wheel drive. I thought it must be a farmer’s truck. They had tractors for when they needed traction. It wasn’t unusual for people to stop on the bridge. Some made wishes and tossed spare change into the river below. It was a little odd to do it in a snowstorm though. Maybe it was their Christmas Eve tradition. I slowed to a stop.

There was a woman standing at the railing. I could see her clearly in my headlights. She wasn’t wearing a coat or hat, and the snowflakes were turning her sweater and hair white. She didn’t even turn to look at me. I thought I could probably squeeze past the truck but maybe I should make sure she was okay. I climbed out of my car, and a big snowflake immediately landed on my eyelash. I laughed and brushed it away so I could see again. The woman was climbing over the railing.

“Ma’am?”  I said. She said nothing and still didn’t look back. The night air was still and just cold enough to sustain the snow. The moving river below us murmured in the dark, and my car engine idled. The woman stood on the other side of the railing and released her hold.

“Oh Jesus, lady. Don’t jump.” I rushed toward her, and she finally turned her head to look at me.

“Please stay away from me,” she said. Her tone of voice was completely calm. I stopped short, slipped, and fell. I could see her smiling as I stood back up. She was about my mother’s age.

“I’m fine. Are you?” I rubbed the hip where I had landed. She turned back to the water. I considered trying to run and grab her. It was just a few feet.

“What can I do to help?” I asked. She ignored me. My cell phone was in the car, but I was scared to move away from her. Maybe just talking to her would help.

“My name’s Dave. Well, really it’s John David, but everyone calls me Dave,” I said, and she glanced back at me. That was encouraging so I kept going.

“I’m on my way home for Christmas to surprise my family.”

I heard her sob, and I could see her shoulders wrack from it. Okay, Christmas was bad.

“Um, that’s my car,” it was the only thing in my head. A little wind had picked up, and the snowflakes tossed about between us.

“I know things seem bad, but this isn’t the solution. It will get better,” I said. I remembered that stuff from a suicide prevention video we had to watch in high school. It got no response from her. I wanted to move. I thought better when I was moving, but I was afraid to advance or retreat.

“Lady, I don’t know the right thing to say to you, but I know you’re doing the wrong thing.” I paused and looked up at the bridge spans. They curved up into the darkness.

She turned around and faced me.

“I was twelve. He did it in the fall after our crops went bad.” I remembered looking at the fallow fields when my mother had told me. She left me on the porch. My baby sister had started crying in her crib. I remembered hating those fields.

“That must have been very hard for you.”

“It was selfish,” I said. I felt a little of the old anger.

“You’re right. It is a selfish thing to do.”

She switched the hand she was holding on the rail and blew on it.

“I can get you some gloves or a coat or maybe you can come warm up in the car.”

Standing in the snow on a bridge on Christmas Eve, I talked to a woman standing on the wrong side of the railing. I told her about my dog, Bear. He was a mutt we rescued from the pound. I went to the state university and was graduating in the spring. My little sisters were eleven and fourteen years old. My mom made the best pies, she even won a contest once, and my grandfather cheated at gin rummy. I didn’t know what to say so I kept talking until I just ran out of words.

The snow had stopped falling, and the sky was opening up. A few stars peeked down through the clouds. It would be a clear Christmas night. I was shivering and imagined she must be freezing.

“Thank you, Dave.” She held her hand out, and I stepped forward. She held my hand for a moment, and I exhaled and offered a small smile.

Then, she turned and stepped into the void.

The red and blue lights reflected off everything as they flashed; like the bad decorations at the mall. I sat in the front seat with a blanket around me.

“She just,” I made a gesture to imitate it with my hand, “jumped.”

My mother and grandfather arrived. She had a piece of pie for me. 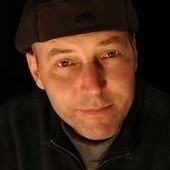 Darren R. Leo received an MFA in Fiction from Southern New Hampshire University, and he is currently querying agents for his latest novel. He is the author of the novella Keeping Score; a short heroic journey. He lives in Rhode Island with a menagerie and a very tolerant woman.