Dogbelly is a creation of the poet Edward Schelb, and the persona—a burnt-out rhythm guitarist for a Texas swing band—is the subject of his Angelic Meltdown.  Dogbelly is also visible in Schelb’s graphic poems, where Dogbelly sports Elvis’ rhinestone suit and Frank Zappa’s moustache. They form a deadly serious philosophical burlesque, with equal parts vitriol and honky-tonk jouissance.
Edward Schelb (words/images) has published widely in both poetry and literary criticism, including recent essays on John Yau and Robert Kelly. His homage to futurism, “Portrait of Five Composers,” was just nominated for a Pushcart Prize.
Christopher Schelb (flute/sounds) is an accomplished flautist who is passionate about avant-garde music, particularly the work of Salvatore Sciarrino. He and his other ensemble members—clarinetist Joel Wezska and pianist Michael Tan—shrug their shoulders at the transmutation of their musical improvisation into the soundtrack for a spaghetti western.
***
Bird Call Dance Hall
I washed out seven birds from the bus front grill,
their bodies twisted, their feathers ruffled from the wind,
and I had to nudge their bones with the wand
toward the drain. The east Texas hills
are full of suicidal sparrows playin’ chickie
with semis. In a few millenium they’ll be drinkin’
antifreeze and shining like glowworms, makin’
their nests from fan belts and distributor caps. Dixie
chickens, Tennessee lambs – that’s the extent of nature,
‘cepting birdfeeders and dog crates
for skinks and ferrets, epiphany templates
that, like the soliloquies of Tantalus, insure
we evade the truth. Audubon stuffed his curlews
and peewits – he didn’t mistake diagrams
for soulfulness. He didn’t dig for clams
and claim the spirit of gulls, drink booze
and crown himself the barleycorn king, the soul
of the finest hops and purest spring water.
The delicate line arises from slaughter.
Botticelli dumped his piss-pot in the Po.
Da Vinci designed tanks. So what if I’ve grown hard
and waterbug shadows no longer form Christ’s cross?
The essence of birds is in the sauce
when Umbrians eat petite oiseaux in St. Francis’ backyard.
So now I sit on my porch, fillin’ up my hibachi
with cigarette butts, cataloguing the sound:
weed whackers spray bottles gangsta rap hound
dogs purr of engines hellfire backfire mariachi
tunes from the grape-picker trailer park.
I add my guitar whammybar wah-wah pedal
to a vintage Black Oak Arkansas medley.
Dogbelly to the rescue in his Buick Skylark.
Anyhow I’ve just sent in my matchbox cover
Forestry exam – draw this bighorn sheep
to qualify for a government issue Jeep.
Name the nature poet’s survival kit: windhover
hidden rivers and kingfisher flight,
Bach fugues rhizomes honeysuckle lovin’
or stones in an empty field, za-zen pin-
heads who rhapsodize over beetle-blight.
Then I can practice my Chinese brushstrokin’
and drink root-broth. Goat-hop bebop
in my treetop – then go shop
for designer binoculars and oil for chicken-chokin’
on those lonely mornings on Lookout Sourdough
solo Kama Sutra when the booze runs lean
and all the ashtrays been done picked clean.
Remember: Kerouac got the DTs and had to blow.
Photo By: Billy Curtis 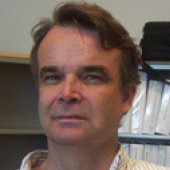 Edward Schelb (words/images) has published widely in both poetry and literary criticism, including recent essays on John Yau and Robert Kelly. His homage to futurism, “Portrait of Five Composers,” was just nominated for a Pushcart Prize.