For the past five years, I have driven to Washington every other weekend to visit my wife. Ninety percent of the time I make haste, knowing that eight hours later a hot supper cooked by a hot lady awaits. But on those long summer days when I manage to get an early start, I go off the beaten track. At Sandusky, Ohio, I exit the Ohio Turnpike, swing onto US 250 and set in for a long, demanding ride through some of the most beautiful countryside in America.

My 2007 Ford Fusion is not an audiophile’s dream. The stereo plays CDs but only if the road is glass smooth. Its display went dark the first week I had the car. No matter, there’s FM radio. I punch scan and cock an ear. Just outside of Elkins, West Viriginia, as a rain shower is finishing, I hear the telltale piano opening of Michael Murphey’s 1975 hit, “Wildfire,” and give the volume nob a tweak to the right.

The song concerns a homesteader, down on his luck, who dreams of a young girl with a horse. The girl dies and the pony disappears into a blizzard. The homesteader hopes that she will return and he can ride off with her and leave sod-busting behind. The song, like so many AOR singer/songwriter works of the seventies, is impeccably produced and played, complete with that delicate matching intro and extro on the piano. Despite its optimistic conclusion, the song exudes a sense of loss and longing. Murphey sets the action on the plains of Nebraska but it is really a cowboy song about being free on the land as opposed to working the land in joyless toil.

But, read at ground level rather than parable, “Wildfire” is a boomer midlife crisis song–the mystery girl on a ghost pony comes to save a gent in need of saving from a life he thought he was obligated to live. Little wonder David Letterman, a man never comfortable in his own skin or routine, became fixated with “Wildfire” a few years back. After weeks of build-up, Murphey was invited on the show to perform the song live. Letterman described the song as “haunting and disturbingly mysterious, but always lovely,” and promised the studio audience they’d be left with “a palpable sense of … mysticism, melancholy … and uplifting well-being.” Indeed, the American Roots imagery of “Wildfire” is seductively innocent and pure in the same vein as Gene Clark’s “Polly.” The song invites the listener to inhabit an idealistic vision of American masculinity in which there is movement without the burden of staking a claim, love without the risk of pathos. The woman is in touch with the spirits of the animal world and the man needs her magic to regain his freedom. It is a masculine escape fantasy that is far more noble and ennobling than a romp with some plastic-titted ninny in Vegas or a lost weekend with a Rielle Hunter kook in Key West, wasting away in Margaritaville.

Murphey, a Texan and a Christian, began his career playing coffeehouses in Los Angeles during the early sixties. As  was the case for Bob Dylan, the coffeehouse provided Murphey with discriminating audiences tuned to lyrics rather than tipples. By the time his first album, “Geronimo’s Cadillac” was released in 1972,  he had decamped to the San Gabriel mountains and become active in both the Native American rights movement and environmentalist initiatives. In this, Murphey solved the riddle that would haunt so many youth of the Age of Aquarius–how to live out the progressive ideals of the sixties without selling out or burning out as the country slogged through the grim confusion of the seventies towards the inevitable conservative counter-revolution of Ronald Reagan. “Wildfire” was his pop cross-over hit but the Murphey catalogue spans almost five decades with the same message delivered with the same integrity of conviction and commitment.

When I hear “Wildfire,” I instantly associate it with Edward Abbey’s 1971 novella, “Black Sun.” It allegedly was Abbey’s favorite book, the only one that he really labored over to get right in his shambling way of composition and editing. Will Gatlin is thirty-seven and, disillusioned with teaching college, takes a job as a fire lookout at the edge of the Grand Canyon. Occasionally he romances a Mexican woman in a nearby town and goes drinking with some Indians. One day, he runs into a young woman while on a run for provisions. At first he is indifferent to her but before long they’re between the sheets. Although Abbey is sublimely awful at writing sex scenes, he nonetheless manages to conjure a beguiling air of Southwest mysticism. Gatlin is a lost soul, a refugee from the sixties too old and too wise to be a hippie. The center could not hold, but in the arms of his spirited minx, Gatlin finds some solace and inspiration. She is not just curious about him; she wants to learn about the landscape to which he has escaped. The most affecting passages in the book take place outdoors “in country.” The lovers achieve a Rousseauian ecstasy above and below the waist. Abbey was a conservationist who knew exactly what he was trying to conserve. One day the girl disappears on the canyon floor and Gatlin spends the rest of the book looking for her. We learn, in a twist, he’s already spent three years on the hunt.

In a recent interview, Michael Martin Murphey contended that his best songs come to him in dreams and the song itself has to have a “dream-like quality.” As I read “Black Sun,” I can pause and imagine lens-flare and the perfume of woodsmoke and pine needles in almost every scene. Abbey’s dream is a dream that is uniquely American, trying to make sense of an inscrutable ancient land that beguiles with its beauty and confounds monotheistic faith with its rugged lack of remorse for man’s concerns.

At last, grief and longing move Gatlin to abandon his exile and return to society. Unlike the narrator of “Wildfire,” Gatlin will not leave sod-busting behind when she re-appears; his girl is gone for good, if not to death then to the land and its creatures. 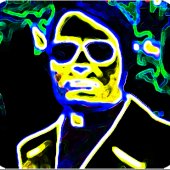 Stirling Noh is a Canadian author of existential novellas and poetry. He also is an essayist and amateur electronic musician. Visit him at http://noh.atomicquill.com.