Last February, author Kim Fu’s “Scissors” made an appearance in the Garth Greenwell-edited anthology Kink: Stories (Kwon, R. O. et al., editors, Kink: Stories, Simon & Schuster, 2021), with genres of erotica and suspense involving two stage actors (women) and a pair of scissors. Pun possibly intended. As you read “Scissors,” you admire the detailing of the set and the characters, you can sense the sweat trickling down the back of Dee, as she sits naked on a wooden chair on a cabaret dais, and you can taste the edge of the blades traipsing along the length of her spine, tense, dangerous, as if sliding down your own back. Fu has perfected the sexuality required from a story such as this and has even nailed other elements that make a great piece, such as a conflict. But the reason why “Scissors” stood out for me, was the way it ended. Ambiguously. In a very Schrodinger-Cat-esque way, leaving her readers—me—to guess if the audience to the stage act put on by the couple was real or imagined. The act can’t be performed without the blinds, and the audience can’t be determined with. I’d found myself confused at that juncture, wondering if the ambiguity was deliberate, a literary weapon wielded by Fu to secure a befitting ending to the tale, or if it was mere reluctance on part of Fu to bring closure to the piece. I was convinced it was the former, but I needed more material to test this theory.

When I heard “Scissors” found another home in Fu’s latest book Lesser Known Monsters of the 21st Century (Fu, Kim, Lesser Known Monsters of the 21st Century, Tin House Books, 2022), a compilation of soft sci-fi stories, twelve—well, eleven—of which I haven’t read, I could not wait to get my hands on it. As I devoured them, one by one, my doubts were confirmed:  If you push back the delicately laid sleeves, the veins from Kim Fu’s stories reveal a pattern. Most of them—if not all—end in that same uncertainty, leaving the reader to stumble around in the haze, figure out the route out of the maze based on their own subjective considerations.

Starting with the piece titled “Pre-Simulation Consultation,” which allows one to enter a simulation of their choice, provided it didn’t feature someone dead or someone they knew—does the character break the rule or does he not?—through “Liddy, First to Fly” about an adolescent girl growing actual wings on her ankles—or did she?—and “#ClimbingNation”—was the character killed or was it an accident—questions linger in the air like burnt tyres for all of the twelve stories, including “Scissors”. By the time you flip over to the last page, the fog has settled so comfortably on parchment, I can only conclude: The ambivalence is intentional, a careful and brilliant construct by Fu, almost like a treasure buried in each of her stories to mark them with her nom de plume, her signature style, which may come to be seen as synonymous with her writing or herself in the years to come.

While that may be the prima facie take away from Lesser Known, I dug a little deeper and came to another startling epiphany: Not only her stories, but Fu’s characters share a commonality, as well. They are all misfits, unicorns, beautiful or grotesque in their own category, but determined to push themselves through round holes, to conform. Be it the protagonist of “Sandman” from Lesser Known who rejects the secrets of the universe to ‘just get some sleep’ like everyone else, or nearly every character from How Festive The Ambulance (Fu, Kim, How Festive The Ambulance). All of them reflect the trademark of Fu. Whilst you wonder where it originates from, her debut novel ‘For Today I Am a Boy’ (Fu, Kim, For Today I Am a Boy, HarperCollins, 2014), the story of a transgender child coming to terms with their place on the spectrum stares you in the face. This latest revelation does not disappoint you, as a reader. Au contraire, since her characters’ motivations seem to emerge slowly, ghostly shapes turning corporeal as you read along and read again and again, the discovery excites you into reaching for more material from her ink, material you can relate to.

Once you have these results in hand and you are completely sold on Fu’s abilities to envelop you with her words, you are free to read and just enjoy Fu’s writing for what it is, and that is when some more figures emerge from the mist. Fu’s stories croon of nostalgia, an aching for simpler times, particularly with her piece “Do You Remember Candy,” a story about climate change deleting one’s sense of smell and taste inviting the protagonist’s maniacal efforts to resurrect them through tactile and visual ones taking centre stage. “Twenty Hours” boasts of the logline: Man, who has a machine that re-prints bodies and consciousness, kills his wife repeatedly, only to realize what he’s losing in the game. “Time Cubes” stars a man who can build cubes that can turn time back and forth for all living things entrapped in them, including humans. Which can only go wrong, if used by a person unwilling to occupy space in that time. In this way, Fu plays with the threads of time frequently, revealing deep anachronistic tendencies that are yet to find stable ground. Sexuality is another open strand you find while reading her work, except in Lesser Known, it seems like a shy strand, a hard tug, appearing only here and there such as in “Scissors” or a passing reference in “Liddy, First to Fly,” References to Canada, her home-country, or her ethnicity, on the other hand, are noticeably absent from Lesser Known, which makes it hard to associate this influence with her writing as of now. All in all, this latest collection of stories from Fu, when read with her other books, throws light on Fu as a writer, and solidifies her command over the craft and her understanding of storytelling

If I have a bone to pick with Fu, it is for the stories from Lesser Known I haven’t already named, that seem to have lost their way while being written. For example, “June Bugs,” about a woman escaping an abusive relationship who finds shelter in a Victorian mansion reeking of June bugs, an allegory for the relationship and her resilience. Or “In This Fantasy,” about a modern day woman with escapist fantasies, striving to become ‘infinitely small… indistinguishable from nothingness’, her fantasies carrying a faint whiff of the characteristic discomfort of Fu’s people, but also, of confused gender roles. These stories, although well-intentioned, do not display the tell-tale vision of Fu, but read like short-hand articulations of Fu’s stray thoughts about women and their position.

All the same, the collection in toto is a fantastic foray into the genre of sci-fi, promising us that there is more where it came from. One needs to only wait and watch. Or flag her movements. 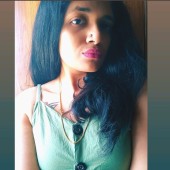 Manasa currently works as a disputes resolution lawyer in India, while leaning heavily towards the write. She has completed certified courses with Michigan State University and Wesleyan University in creative writing and journalism, and has published her works in an anthology brought out by The Archaic House in 2021. In her spare time, she writes about films and memory loss and about films.