The Fracture & the Fusing Carolyn Guinzio’s collection, Spoke & Dark, requires a reader intent on the nuances of language and the way words and their meaning call to mind other words and their meanings in a nearly endless cycle of referencing. We look at a title that appears simple, two words connected by an ampersand, and then, as we read on through the poems, the title of the collection fractures time and time again, fusing over and over into new layers, new webs of meaning.

At one level, the word “spoke” resonates as Guinzio explores language at its best, facilitating human connections, and at its worst, failing to provide an adequate meaning to emotions out of bounds. More subtly, another definition unfolds, and we begin to understand “spoke” as the support structure joining the hub to the rim, with poems of connections and intersections, infrastructures and grids, all fluid and in motion. Finally, “spoke” becomes a near-miss of “spook” when set next to the connotation of “dark.” This becomes apparent as Guinzio delves into what separates the living from the dead, a thin veil to be sure.

As Guinzio investigates what covers and conceals throughout this book, “dark” is first and foremost understood as the night, with the light of day as foil. However, more layers emerge in the ominous undertones. “Dark,” then, is also a stand-in for sadness, loneliness, ache, a heavy emotional weight. That bleakness hovers in the background as the speaker searches for those binding, human relationships we seem built to need. And, following the thread of the word “spoke,” “dark” also works as that hint at death, which provides both haunting and connection.

Joining the two words, easily skipped over, is the ampersand. Guinzio highlights this typographic mark by offering up a list before the poems, a list that traces its multiple meanings. The reader, therefore, cannot skip lightly over but must call into question how this mark of “conflation,” “ligature,” and “and” influences the entire collection. Interestingly, Guinzio does not use the ampersand within the text of the poems, except on one occasion in the poem “Of Eye & Heart,” saving it for the titles of many of the poems that follow the pattern of the title of the book.

So, at the heart of this intense collection is the idea of joining one thing to another (one human to another, the living to the dead, the human to the natural world, one idea to another idea) and of overcoming whatever seeks to split those connections.

There is also mystery here among these carefully wrought lyrics. Often, there are losses that go unnamed, as in the opening poem “River of Feather & Web” in which a group of boys “have not found it yet” but “scour the ground” from the vantage point of a bridge. “After weeks of searching / with the dogs through the fields,” … nothing is left save “[a] dead lead dried into thinness.”  The reader speculates and wonders as all the clues indicate the boys are searching for a body, but what body and why? There is no answer. Instead, the rest of the collection features a speaker on a quest for comfort, for soothing, as she navigates a world “[w]ild and delicate / both” (from “Sky &”).

In order to face fracture and loss, Guinzio focuses on all the interconnections possible, of human to human, human to nature, and human to the spiritual world. We find a clear example of this in “A History of Stone & Shadow,” which begins:

Face turned to stone, face down in water.

When we run our thumb over the bones

of a fern in a stone, we know the sun

still was, heating a wet and living

It is an old trope, this use of the cycle of life as a compensation for the reality that we will all pass the face of this earth, and yet, Guinzio makes it new. She speaks of “the voluptuous pleasures of the grave,” all the while acknowledging that for those left living, “Something is missing that makes all the difference” (from “The History of Stars & Ghosts”).

Within Spoke & Dark, there are four poems titled “Shelter.”  Each is numbered and contains a descriptor that details the state of the shelter, from “Husk” to “Frame” to “Felled” to “Last.”  Within these poems we see the arc of the book, as the speaker attempts to find a shelter, both literal and figurative, does so, and then realizes that nothing endures. In “Shelter #4: Last,” Guinzio writes, “See what becomes of even stone- / carved letters.” These poems echo a reference in several other poems to an old, wooden shack perched on the edge of a creek, slowly disintegrating as the speaker observes. The shack becomes a comfort even in its demise, as the speaker recognizes that it contains and broadcasts the lives of others who have gone before her. This is a perfect example of the layering that happens within the poems and the webs of connection that form between the poems as they coalesce into the whole.

Finally, the collection ends with a long poem, “A Liss,” which previously appeared as a chapbook from Dancing Girl Press. While the poems in the first three-quarters of Spoke & Dark contain an ethereal lyricism, there is always something tethering them, anchoring the reader in their meaning. In “A Liss,” Guinzio lets that tether loosen and explores language and typography with more freedom.

“Liss” is not a common word, and the OED informs us that it is a “circular enclosure with an earthen wall, as in a fort” in the Irish usage, and it has an obsolete meaning, as in “remission, abatement, peace, rest, tranquility.”  Given the weight of the poems leading up to it, again, both meanings resonate. It also seems a play on “A List” as the segments of the poem are each headed with a descriptor: “an equation,” “a rite,” “sewn,” and so on. Here, in “sewn,” Guinzio implores,

Spoke & Dark requires much of the reader, a keen attention to each word, each placement on the page of each mark, but Guinzio rewards as well, offering up a new path, a new way of seeing and understanding the fleeting essence of this fragile world and the enduring remnants. 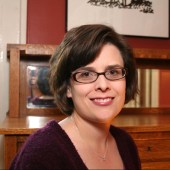 Sandy Longhorn is the author of Blood Almanac, which won the Anhinga Prize for Poetry. New poems have appeared or are forthcoming in Crazyhorse, Hayden’s Ferry Review, Hotel Amerika, North American Review, and elsewhere. Longhorn teaches at Pulaski Technical College, where she directs the Big Rock Reading Series, and she teaches for the new low-residency MFA Program at the University of Arkansas Monticello. In addition, she co-edits the online journal Heron Tree, is an Arkansas Arts Council fellow, and blogs at Myself the only Kangaroo among the Beauty.