Edward Hirsh once said, “Poetry never loses its appeal…the essential mystery of being human is always going to engage and compel us. We’re involved in a mystery. Poetry uses words to put us in touch with that mystery.” This mystery is what Michelle Brooks works to describe throughout the dingy alleyways and empty parking lots of her collection, The Pretend Life.

“You were a confection, a little / dead around the eyes, the kind / of woman people describe as / pretty in a hard way,” Brooks writes in one of the opening poems of the collection, “The Night Market of Ghosts”. These lines could describe the collection in total, “pretty in a hard way.” Brooks sets the scene of a bleak city, adorned with cheap stores selling everything at a discounted price, and the dreary atmosphere she creates only highlights the underlying themes within the collection. Brooks is sending a message about the loneliness she finds herself in, even in a densely populated city. Her descriptions of everyday life both capture the reader in a perpetually abysmal mood and explore the struggles of longing for a past that no longer exists outside of one’s own mind.

The collection explores several distinct experiences and overarching themes. These include but are not limited to the following: violence or death, loneliness, longing for the past, city life, and past trauma. The collection seems to be grouped by theme, and while the themes repeat throughout the book, Brooks is able to describe snapshots of time in fresh ways. One poem that seems to explore many of these themes simultaneously is “It’s Later Than You Think.” The speaker describes the scene of a run-down Dollar General the day before Halloween, just before closing time. The speaker states, “The cashier, a middle-aged / woman with Bitch tattooed on her neck asks me / if I found what I needed. I nod and say yes, thinking / does anyone?” (11). The poem goes on to describe the interaction between them when the speaker reveals that the cashier informs her of a strange man that has been following her around the store. The speaker states, “I glance back, relieved / no none is following me, noticing the sign festooned / over the door, Spooky Savings Inside, as if I wouldn’t know” (11). The general lack of concern in her writing and near disregard for safety only reinforces the depressed mood that spans most of the book. The desensitization described within the work creates a somber and nearly numb tone as the collection progresses.

Another poem that demonstrates a major theme of the book is “Notre Dame Is Burning”. Brooks creates a parallel between the cathedral burning and the painful process of a relationship dissolving until she is left with nothing but open wounds. The speaker states, “When they announce that they have saved / the crown of thorns, I think, That sounds right” (36). The remaining artifact being one of inflicting suffering, exile, and humiliation only furthers the writer’s despair that has already been previously established with the opening lines, “You left months ago, and I became / a ghost, haunting my own life for clues” (36). The placement of this work within the book is amongst other poems revolving around trauma and failed relationships as well.

A defining poem from the collection is easily “The Pretend Life.” Brooks offers readers imagery of trailer parks and cheap soda paired with descriptions of exhaustion and lifelessness. She also describes liminal spaces and feelings of yearning and loneliness with the lines, “… I’d live in the space before everything / begins. I’d be no one you know” (24). She states, “I’d be… a flash / of color you might see as you drove / by me on your way to somewhere else,” which only strengthens the feeling of solitude of going unnoticed and unwanted (24). Of all the spaces described throughout the book, this one is the most all-encompassing and transcends the mundane limitations of page numbers or line breaks. Brooks successfully captures the fleeting nature of existence within urban environments coupled with descriptions of the ghosts of our past relentlessly haunting us and the sense of dread that is born from this. While those familiar with Brooks’ work may be prepared for this type of read, those who are not may be in for a surprise.

Nearly every poem in the collection has been previously published in various literary journals such as Black Fox Literary Review, Sierra Nevada Review, and Manzano Literary Review. She seems to have a knack for writing about darker subject matter. While her online presence is sparse nowadays, she has published four other books: No Half-Measures Here (2003), Make Yourself Small (2011), Dead Girl, Live Boy (2011), and Pretty in a Hard Way (2019). Taking from other brief reviews online, the subject matter of those works seem to follow the dark themes presented in The Pretend Life.

At the heart of the work is an overarching narrative around living as a young woman in the city, grappling with the ending of relationships, violence and threatening situations in everyday life, and the pervasive concrete grey environment. The persevering nature of the speaker takes readers along an emotional journey, primarily of general dread. The synopsis on the back of the collection describes itself as a sort of “elegy for the living,” and I would have to agree. 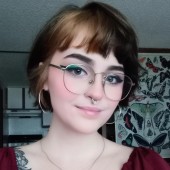 Susanna Skelton is an MFA student at Western Kentucky University studying poetry and rhetoric. She has had work featured in the Sequoya Review, Eclectica Magazine, and STRIKE Magazine.