Ezra swings hard until his body right-­‐angles to the earth. Almost too big now to fit the chain and rubber sling, he swings until the bar rattles at the apex, until all I can see of him is a curve with a face, a grinning ray about to shoot off through the sky.

A small Indian boy, olive-­‐skinned, walks up to me on a bench at the playground. He looks me in the eye. There is a circle of children behind him, quiet and waiting like stars on an arabesque. ‘Do you have some bread?’ he asks. I can see myself fish-­eyed in the domes of his thick glasses. I’m not sure what to say.

‘Pretend,’ he says with a flick of his wrists as if tossing a doll into the air.

I can’t understand him, and he reads that in my eyebrows. ‘Pretend,’ he says again, flicking his hands, the doll turned to a juggler’s pin.

I still don’t understand him. Annoyed, he says, ‘Pretend you have bread,’ the juggler’s pin turned to a weightless boulder in his powerful fingers. I see now.

I reach into my pocket and pull out air, cupping it in front of his face. The other children watch us closely, their eyes ticking to each movement we make. The small boy reaches into the warm concave of my hands and pulls out the air. Pinching it in front of him, he walks back to the circle and fists out loaves to his chuckling friends.

In a few minutes, they’ll be back for more, for soda and spaghetti and hamburgers, and, now that I know the game, I will give them everything they ask.

Ezra swings higher and higher, almost gone now. There are his eyes for a second, the quick half-­‐moon of a smile, and then he is nothing more than a pendulum blade. He is a threaded spider in a doorway; he is a stone about to fly; he is the long, centuries­‐long, ellipsis of a comet. 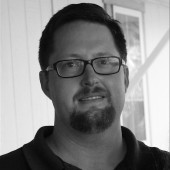 Micah Chatterton's poetry and prose has appeared in a number of online and print journals, including Coachella Review, Atticus Review, Mosaic, and Main Channel Voices. His work also appears in The Cancer Poetry Project 2 (2013). Micah earned his M.F.A. in Creative Writing and Writing for the Performing Arts from the University of California, Riverside. He is currently perfecting his funny reading voices as an elementary school librarian.