Susan Triemert’s brilliant collection of flash essays Guess What’s Different opens with Triemert strapped into a slow-moving ambulance: “Ambulances are for emergencies, right? You realize that yours, the one you’re strapped into, has two jobs: to carry you from one hospital to another. And to keep you safe—from yourself. …” Triemert is being transported from the ER to a psychiatric inpatient ward, where she will be spending her wedding anniversary and July 4th hospitalized for anxiety.

Triemert’s compassion for the other patients is palpable:

You’re admitted in rust-colored scrubs and have nothing else to wear, so your husband heads to Target to buy clothes, safe clothing—no zippers, no strings. You recognize a woman from the ER, admitted on the same day as you, and by midweek she is still wearing those same scrubs, now rolled up to look like cargo shorts. You tell her you’ll lend her a pair of black leggings. When you deliver them to her doorway, her eyes fill with tears, “This may be the nicest thing anyone has ever done for me,” she says.

Compassion for others and for her own experiences are hallmarks of this incredible body of work. Triemert herself is a body at work. Analytical and self-aware, she seeks to understand her past and how it impacts her present, and she invites us to join her on this journey of making sense of family secrets and loss. We can’t help but cheer her on in her quest to end the cycles of silence and shame.

There was great trauma and loss in Triemert’s family—none of which was spoken about. In “Second Summer,” Triemert confronts a tragedy she’d only learned of when she was in high school: her grandfather accidentally hit and killed his 18-month-old son with his truck. Because the accident—and, in fact, the very existence of this child—became a secret held so close, Triemert had many blanks to fill when relating the account. She does this masterfully with speculative elements and gut-wrenching questions: “His father must have been accustomed to checking for children… What had been different this time? Had the boy been in his blind spot? Had the shards of sunlight blocked his view?”

In the essay, Triemert moves back and forth in time—from the accident, to her childhood memories of sitting on her grandfather’s lap, to her own mother’s death when Triemert was an adult, to her dad’s when Triemert was just nine. This time travel parallels the nonlinear path of trauma, marked so often and so powerfully by silence. Triemert, at nine, quickly discovered she was not welcome to speak about her father or his death: “I learned not to ask questions or bring up memories, as my mother’s eyes would turn glassy, her nostrils moist and red, her downturned lips quivery …” While Triemert writes compellingly about the price she and other family members have paid for the silence, she observes with empathy and without judgment: “My mother had not been taught to deal with death, to speak of grief. When nothing is said of the sibling who died before you were born, how do you learn?”

The essays in the collection are varied in form, providing an engaging lesson in craft. Several are told in second person point of view. There are micros about her mother and their complicated relationship, each a potent little snippet that haunts. Triemert also includes several hermit crab essays. One of the most effective is “How to Activate Your AncestryDNA Kit,” in which Triemert lays out the steps involved in taking the test, discovering her dad had a son she (and he, apparently) hadn’t known existed, and of meeting that son—her half-brother. As in many “how-to” manuals, there are warnings. For Triemert there are also great disappointments beautifully rendered through instructions:

Shake the tube for at least five seconds.

Shake (and cry) for five seconds. Five minutes. Five hours. Two months after you have met, he will tell you he no longer wants you in his life. By then, you will have created a bond with his daughters—your only nieces from your side of the family. He looks like your father, and it feels like you are losing him all over again.

Triemert writes about her mother’s boyfriend, a demanding and often cruel man who entered the family’s life while the grief of her father’s death was still new and raw. Triemert writes about her dad, a complicated man whom she knew for far too short a time, a man who held secrets of his own. And she writes about her two sons adopted from Siberia, about their losses and her determination to create a family where memories are celebrated and where secrets are not given oxygen to thrive, “a place where every being who lives here has been chosen, a place where everyone belongs.”

Guess What’s Different is a powerhouse of a collection. Triemert unapologetically, with unsentimental honesty, and with great skill writes the experiences people most often choose to hide. While the essays deal with enormous pain and trauma, the collection speaks most forcefully to resilience, hope, empathy, and love. It is a brave excavation of a past and an inspiring examination of how to change a long-held family script. Triemert’s writing is truly a gift. By sharing her stories, Triemert opens the door for others to release their own pain and hopefully share their stories as well. 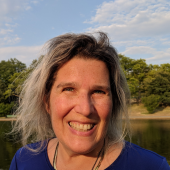 Diane Gottlieb’s writing appears or is forthcoming in River Teeth, SmokeLong Quarterly, Barrelhouse, The Rumpus, Hippocampus Magazine, Atlas and Alice, and 100-Word Story, among other literary journals and anthologies. She is the winner of Tiferet’s 2021 Writing Contest in nonfiction, a finalist in SmokeLong Quarterly’s 2022 micro contest, a 2023 nominee for Best of the Net and Best Microfiction, and the Prose/CNF Editor of Emerge Literary Journal. You can find her at https://dianegottlieb.com and on Twitter @DianeGotAuthor.