“Metal up your ass!”

When future glue­head Buddy Litwiller showed up to class pictures in a Metallica shirt, I think I was the only one who thought it was hilarious.

Metalli­cut, razored edges­­the classic logo I spent most of Pre­Algebra writing on my notebook in lieu of figuring out what X represented. Below the band’s name, a switch­blade rose from a porcelain bowl­­like a low rent Excalibur­­driving the message home.

Buddy didn’t even get the option to turn his shirt inside out. “Cliff Burton died two years ago today! Fuck you! That’s way more important than a school pic.”

The doctors’ kids put their heads down. I got red hot embarrassed for him. At first I thought like everyone else thought, Buddy was lying. Nobody cares about class pics, and no one makes up an excuse like that to get out of them. Poor white trash kid, probably never owned a shirt with a collar. My collar had a hand­me­down stain to it. I sweated quietly in the back of the room.

It wasn’t until 7th grade social studies that I learned “Fuck you” could be a poem. 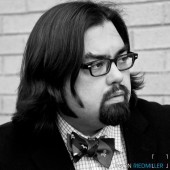