I.
The technique for throwing knees in quick succession is quite similar to the Running Man—that ubiquitous late 80s, kinetic dance craze popularized by crossover rappers like Oakland’s MC Hammer. Actually, it’s exactly the same. As children in the basement of my grandmother’s house, my double-first cousin, Keith and I would create dance routines whose foundation and major content was the Running Man to the hip New Jack Swing of Bobbie Brown’s “Every Little Step,” or Neneh Cherry’s sassy “Buffalo Stance,” or even Stevie B’s sweaty “Spring Love.” Who knew all those weddings we went to as kids in our black turtlenecks (so as to better set-off the gold chains) layered beneath our matching V-neck sweaters, which cleverly rhymed with our gold-tipped dress shoes and pegged, knockoff Z Cavarichi parachute pants, would come so in handy later in life. If only I could find the practical applications hidden in the Hully Gully or the Electric Slide—find the missing steps to bridge the dance floor and the cage door.

II.
The real test of a fighter’s resolve happens back stage while waiting his turn. Some prefer to fight right away, others need the time to relax and focus. Usually I am openly and unabashedly almost dramatically nervous—so nervous my parents would call it “nerves,” a not-so-subtle euphemism for emotional instability—so the longer the night goes on the worse off I am. It is tedious to have to interrupt hand wrapping, pad hitting and teammate bolstering to make frequent trips to the toilet, especially while wearing MMA shorts— which have vertical and lateral Velcro straps plus laces—and then there’s the cup to deal with. And there is often a line of other dudes trying to look calm while simultaneously not shitting their pants and avoiding the nervous talking that sometimes overcomes new fighters. Every fight was like this, except, that is, the first one. For this fight, I wasn’t nervous at all. I was bored, ready to be done, unconcerned like I was in line at the grocery store. It wasn’t confidence, I don’t think. If you’d asked me how I was feeling, I would probably have shrugged. All night, I could hear narration, a voice-over louder than my coach’s instructions. I nodded at the correct moments, not really following along but not confused either. The desired outcome was clear even if the steps were lost. Maybe I was too old to be embarking on a fighting career, but I knew what it was like to perform under pressure. I had been a pitcher as a kid, always getting picked for the second-to-worst team—teams so bad that if the ball left the infield, it was at least a triple and probably an in-the-park homer—and yet I did manage to win a game or two. In high school, I was a tennis player better known for my screaming tantrums and racquet throwing than for my skills on the court. I wasn’t the kid who ripped his team shirt Hulkamania style when he lost a match, but I was close enough. I knew how to perform under pressure and I knew how to crack under it too, but here I was waiting in line, cashing a check or making a money order for the groceries like my parents used to do on Friday nights.

III.
I don’t remember walking out to the cage. I don’t remember what song was playing. I don’t remember the cage door locking. I remember the bell ringing and then getting hit with a wild right. It was a really lousy punch, yet he caught me on the temple and then the mat began to tip towards my ear. And, for some reason, instead of defending myself I’m thinking about the standardized test I took in second grade where I misread the word, “sweater” as “sweeter.” The whole time I’m reading about this kid’s new sweeter that he ultimately leaves at the park or something, and I have no clue what is going on. I don’t even know what the test is for. I’m just following along, filling in little holes, and thinking about the seesaw balancing record my best friend Craig and I are going to break at recess. It’s at this point that I became vaguely aware of my opponent trying to choke me. A couple of weeks after the test, my teacher tells me I should go to this special room where Craig and I would prepare presentations on space shuttles, write papers about California condors, and perform puppet shows like the Three Billy Goats Gruff for the kindergarten and first-grade students. And I could read all the books I wanted instead of copying sentences off the board. The choke got tighter. If he blew out his arms on this choke attempt, he’d be left with empty sweeter sleeves, waving to no effect like those one-legged air dancers car dealerships were so fond of. The choke, however, was dangerously tight now. Some part of me was aware of being in trouble; I got the gist but by the time I made the move to get out, it was too late. And then I’m waking up.

IV.
He walked in but not out. I was calling the fights that night because I had broken my right hand a couple of weeks earlier getting ready for the finals of the 2011 Team Challenge. Our team went up 2-1 quickly. “The Mechanic” tuned-up his overmatched opponent in one round. “Too-Tan” was in a dogfight until he caught his opponent’s chin with a knee that blanked him in round 2. “No Mercy,” sadly, pled for clemency after running out of gas in a fight he was dominating. All we needed to do was win the next fight. If this had been a movie, they would have won match four and it would have come down to an insane Rock ‘Em Sock ‘Em robots finish with the good guys snatching victory with only seconds on the clock. But that is not how it went. This would have been my fight if I had not hurt myself punching “the Face” in the face. It was clear right away that Rudy’s wrestling was too much for this kid. Barely a minute into round 1, Rudy catches his back in a standing rear naked choke, and it’s all over. If Rudy catches you in the first round, he’s a finisher—the other reason we called him “One Round Rudy.” Although a dominant position, having to ride piggyback requires stamina—something Rudy doesn’t have a lot of. The pressure of the moment, his earnest desire to keep his team in the tournament, or just a lack of technical understanding—whatever the reason—it would be both his last day as a competitor and mine. When he bent over, as if bowing to the audience (as if making a grand exit) trying to illegally spike Rudy on his head, he forgot to take into account that Rudy’s center of gravity and his own were not in line. When he passed the midway point of his bend, gravity took over and then there was no way to stop the meteoring to the canvas. He landed right in front of my commentary position, his head twisted in an acute angle under Rudy’s weight. He didn’t get up—not right away, not after the paramedics came in, not ever. 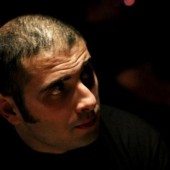