Curtis Sneed burned his garage down and every kid in the neighborhood watched from my backyard. Nobody wanted to be too close. We watched through the fence and across the alley as smoke billowed into the sky.

At the playground that day after school Curtis stuck his gum in Jessie Gillen’s hair. Jessie told her brother and Brad punched Curtis in the face.

Everyone was still at the park after school. Brad pushed Curtis up against the slide and the kids closed in like lions. I climbed into the tree and watched over their shoulders. It had rained that morning before school. Shoes suctioned into the mud and popped like suds. The circle got tighter as they egged Brad on. I egged Brad on. Cole Reynolds was laughing so loud right in Brad’s ear. Jessie was standing next to Brad tugging at the gum and crying. I slipped from the tree and fell, no one noticed.

Brad cocked his arm and swung at Curtis. His knuckles struck Curtis’s right eyebrow and opened it up like a zipper. Blood squeezed out and down his face. The boys cheered loudly and the girls all groaned at the sight of the blood. Kelly Duitman gagged like she was going to vomit. Curtis’s head flung back and hit the metal slide with a big gong. He crumpled to his knees, held his head and eye, and cried. Cheering and clapping and crying buzzed through the park.

I walked towards them. Kelly was pointing and chanting, “Baby, baby, baby.” A puddle soaked into Curtis’s jeans and he got up still crying.

“Stop it,” he screamed. He closed his eyes tight and swung his arms around violently. “Stop it just stop it.”

Curtis pushed through the pointing fingers and took off in a dead sprint. Some of them chased after him. I yelled to them, “I know where he lives.” They looked at me like they’d never seen me before.

“What’d you say,” Cole Reynolds asked. I looked around and twisted my foot in the ground. They all watched me.

“I said he lives behind me.” I started to walk. “Follow me.” We broke into a run and jogged the block and a half to my house. From my backyard you could look across the alley and see Curtis’s whole property. None of them had ever been to my house before. I had the biggest yard in the neighborhood, big enough to play football in.

We waited to see what would happen.

The year before, on Valentine’s Day, John Zalewski dared me to give Curtis a mean valentine. He told all the kids in the class that I’d do it. I drew up a picture of Curtis with a wet stain on his pants and I wrote “Happy Valentine’s Day, Curtis Peed”.

He was sitting at his desk cutting heart shapes out of construction paper with a pair of scissors. He was hanging them as decorations all around his desk. They all watched me and noticed me. I stuck my hand out with the card in it and Curtis grabbed it.

No one had given him a card all day and he was happy. He smiled at me and said, “Thank you.” When he read it he started to cry.

He set the card down, picked up his lunch box and threw it at the window. The box spun and opened up, throwing all his sandwich and cookies to the floor. The lunch box shattered the window like an egg. I sat in detention a month and nobody would talk to me.

Curtis came out of his house still crying. He squealed at the top of his lungs like a baby would. He held a bottle of lighter fluid. The kids whispered to each other. Curtis squeezed the bottle and a long stream shot into the garage. He went back inside and came out with a long lighter and the garage went up.

The flames jumped quickly onto everything in the garage. I didn’t want it to burn. I hoped it would rain again right then. Thick black smoke filtered into the sky like a cold breath. Curtis jumped around still crying and screaming until his dad came out in a fury. He grabbed Curtis by the arm and started slapping him. The kids in my backyard all started laughing loud and I know Curtis saw us. His dad was slapping him and they laughed. I laughed. 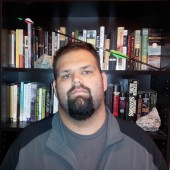 Jeremy Jasper is a second bachelor's student at Columbia College Chicago. His fiction has previously been published in Joyland: A Hub for Short Fiction.