I look away when the knife goes to neck and
I do not cut but saw, the blade sharp and quick
and each time it slices through I say “whoops” –
as if I did not expect this sudden release and the bird
pumps blood into the ground, its wings beating
frantically and I remember a story my dad told me,
how the Romans raced their slaves and cut off
their heads while running to bet on the distances
and my dad crushed beneath a tractor his head
caved in and the beating of his limbs I did not see
so we pretend it was quick but I know how chickens die –
he told me a hundred stories of death at war or under cars
or in machines in factories and on farms the bodies
of men and their blood. I searched for his blood
on the road where he died but found none. 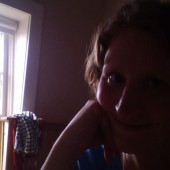 Angela Williamson Emmert lives in rural Wisconsin with her husband and sons.