A fossil from the beginning of the world lay at the base of a tree a hundred years old, was plucked up by a man in his fifties, was handed to a grinning boy of four. This leaf used to be alive the man said. Now the leaf is stone forevermore. Six words followed by another six. Twenty-one letters and then twenty-eight.

The man counted it all out to the boy, he explained how numbers contained life that human minds could scarcely comprehend. They were gifted with souls and proved that God is at work. God created numbers before anything else. Without numbers the universe has no substance. That was what the man had been told as a child and that was what he had continued to believe throughout the journey of his life. 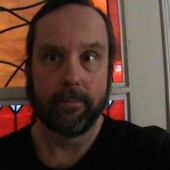 Over the past ten years Joel Best has published a variety of short stories in venues such as Pindeldyboz, Strange Horizons, Eclectica and Quick Fiction. He is a graduate of the State University of New York and lives outside of Albany with his wife and son.