It’s not that there are women or men, my wife said, it’s that there are two kinds of people, the ones who look at the road kill after they’ve smashed it, who try to beat the raven to the carcass, and the ones who ignore the thump and pray there is nothing attached to the smudged bumper.

Afghanistan held me to the nightly news.

She stayed in the kitchen.

Every day I sit in the spot where I died, in the living room, near where the dog scratches her back on the side of the couch like a bull rubs against a fence.

They call it the river of life, the flow of blood, and mine were dammed by a blood clot. All the platelets rushed to see what was going on like a crowd around a disaster will do and prevented life from keeping on its journey.

I did not fall over dead in a few seconds. I fell blue and gasping, like a fish on the bottom of a boat. It took the hard shovel of the palm of my wife collapsing my ribs to save me, to dislodge the clot and shame the on-looking crowd of hemoglobin to disperse. She’s my rowdy fire chief, the one expanding the perimeter of space that kept me alive.

Every day I am reminded of the phrase the quick and the dead.

Crows and ravens abound around here, as if the carrion count has increased. Crows caw, commune, are cordial with each other, but ravens jeer, snipe, cackle, jape, jaw, cluck, everything but coo. They are the world’s cynics, the jokers. Though less common, elitist, they are faster to prey than the crow. The first thing a raven does when encountering a wounded or dead mammal is to pluck out the eye, steal that last glint of reflection, as if bent on accumulating those frozen mirrors of the sky.

That I do not remember the five minutes before my death tells me that either my brain does not want the memory, or that I achieved absolute zero activity before my pulse stopped. That gives me some level of comfort for the bumper crowd, the raccoons that paw over a dead lizard in the middle of the road and at the last second raise their head to gleaming chrome. If the raven comes, the raccoons do not remember.

My wife is perfect in the way a seedless watermelon has seeds, in the way a beautiful face has one feature too large in dimension, the way a snowdrift or dune-drift curls over but never completes the curl, or like a jazz riff that’s a half-tone low but slides up as the note finds completion, sauce with an unidentifiable spice, hip a tipping arch waiting for a cupped hand.

She creates life, generated three children, a family, countless different communities and cultures. She is ruthless with death. She ignores it, but when confronted, pounded it out of my chest, revived me not with just a plaintive prayer, but with focused pulverization.

In death there is no dignity, slow cooking until you fall apart like pulled chicken, or like a hunk of beef, charred and done up in minutes. An old man passes you in a diaper. You want him to hide, or be hidden, submersed. An old woman curses you from afar, yells that she wishes to die. You feel ashamed, as if you should help her and cannot. She has been hit by the chrome of instruments, probes, walkers, hospital beds. She lies on the side of the road with the tire track of time across her body, the same side the raven struts.

Wood chippers. A bunch of mean-toothed saw blades whirring around at the speed of light swallowing a galaxy of branches and reducing them to a stream of infinite singularity, taking cellulose from the side of time through a black hole to the other side, where in the morning steam rises as if the Horsehead Nebula had reared in your backyard. Chippers turn dead cellulose into food no less than tires grind a coon into beak-sized bites for the raven. For humans, we have cancer.

String theory. This is how a spider seals its prey. I’m not talking about the elongated spinning of the individual strands of a web. I’m talking about that mummy wrap they make near the floorboards and molding to hold a meal they want seconds on. They gum one little strand at a time, and eventually have built a wrap that does not yield to the stringed bristles of a broom, but must be poked at by a stick or more firm piece of matter to move. Once that dead bug has become seconds, as you can tell by any leftovers in your fridge left there too long, it becomes some type of new matter, a creation. When we rise at dawn and the sun skirts the horizon we see those leftovers in the intricate glistening web, the ugly insect resurrected as beauty.

Ones who cannot look at the kill, and the ones who go back. Like the raven, I go back.

If you stare up through a redwood to the point your gaze goes at a ninety-degree angle the tree appears to move, the bark in vertical spiral growth as if the mirrored reflection of our DNA. This is what my wife is like, intrinsically holy, her helix stuck like a trunk in the earth looking up and dizzied, dancing inside to her faith.

Some adventurous roadside diners gather or have roadkill delivered. They cook car-assaulted possum, coon, and armadillo, all breaded, battered, peppered, fatted, egged, and salted. It all tastes like similar coated chicken, or rattlesnake, or alligator, which is to say it tastes like pepper, fat, flour, egg, and salt.

We do not shy from other violently killed animals, deer, boar, steers, turkey, or the ostrich or bison or emu. It’s the run over factor that makes us deviate, the tire tracks, the coyote’s drool that tastes like a lonely howl left with the whimper before the semi passed. It’s the pecked at factor, the eyes turned flat.

When my wife looked into my eyes the gloss and glass had passed, and she knew the raven stood on the doorstep, and she flattened my sternum into my spine until the raven had flown and my breath came back. She knew I lived when my eyes caught fire.

She took our three children to the park in the dark lit by hundreds of fireflies. The night was muggy, and the kids returned to the porch sweating from all their helter-skelter running.

My son said they had not been just capturing fireflies in the jar. They had seen other things, too.

They had been transfixed in absorbing the sight of the quickened incandescence of moths falling against the rusted galvanized siding of an old shed, a barn owl painted by the flash of high beams illuminating a power pole at the park, wet grass that glistened under lampposts.

All this time, they had been beating back darkness.

All this time, catching light. 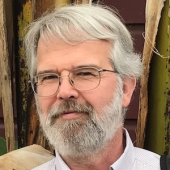 Jeff Burt lives in Santa Cruz County, California, with his wife and a July abundance of plums. He has work in The Nervous Breakdown, Eclectica, Storm Cellar, and Wayfarer. He won the 2011 SuRaa short fiction award.